15 Years Later, BioShock Is Still Worth Diving Into

Would you kindly read this? 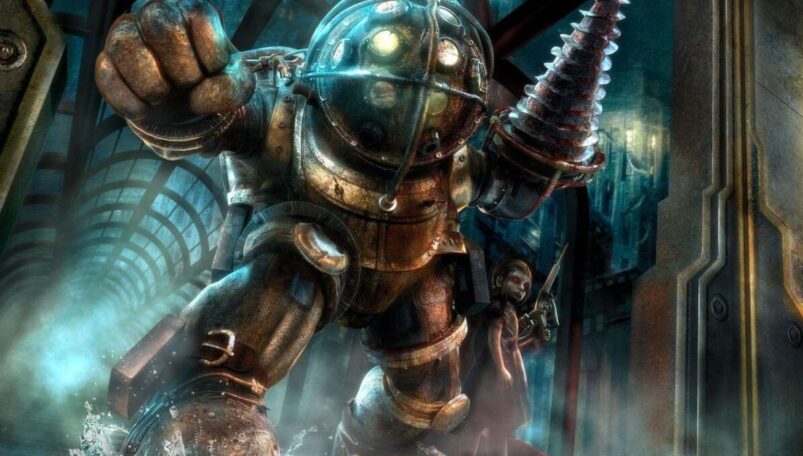 15 years ago, the gaming world wasn’t quite ready for BioShock when Andrew Ryan invited us to his underwater vision, Rapture. A city where inventors, creators and eccentric minds could gather and avoid the oppressive, tyrannical chains of conventional global politics. To create and mould the essences of life to their perfect image. As you’re taken down the deep watery depths of the city and the doors to your bathysphere open, you find that it’s too good to be true.

As the crazed locals (or “splicers”) greet the game’s protagonist, Jack, you barely have enough time to fathom the horror of this deep water prison before you hear the heavy stomps of the Big Daddy and the demonic, shrill voice of a Little Sister. Your only hope of escaping this deep abyss is your faceless companion, Atlas, and a walkie-talkie, as he asks you kindly to help liberate Rapture from its insane leader.

That is only the first half hour of Ken Levine’s horror odyssey that dragged the horror genre itself kicking and screaming into the seventh generation of consoles. The genre needed BioShock, as horror games were somewhat in a lull in 2007. Dead Space was a year away, Silent Hill was lost in a fog of its own creation, and Resident Evil was creating QTEs involving boulders. While there were other titles such as Fatal Frame or Eternal Darkness flying the flag high, the mechanics and overall style were becoming increasingly dated by 2007.

BioShock’s killer charm lies in the fact that it takes existing styles of play and gives us a unique, uncompromising, and ruthless horror game. Fast-paced action horror titles such as Doom or Quake already existed, but BioShock gave the genre a fresh coat of paint for younger audiences by using modern shooter mechanics, which back then was truly something unique and mechanics we take for granted today. Each corridor, each room had a sense of fight or flight — you never felt truly safe.

Though Rapture’s atmosphere was foreboding, you didn’t really have a lot of time to think about that, as you blast surveillance droids and splicers into pieces with an assortment of weapons and plasmids. The balance of scaring the player and engaging the player to fight was a balancing act that would have most developers scratching their heads in current times, but Irrational made it look easy.

In a gaming world where murky brown shooters were becoming the norm, BioShock came out the gate with a cartoon steampunk art style that juxtaposed its horror storytelling. 15 years on, it’s an art style that has aged like a fine wine, during its opening moments, that reveal shot of Rapture’s exterior still looks beautiful, while its interior still looks like it has been lived in. It truly was a game where its immersion still wins over generations of gamers.

However, that wasn’t the only trick Irrational had for total player immersion. Rapture was a city that boasted the world’s greatest and most creative minds of the 20th century, so how on Earth does a city get from a promising utopia to a nightmarish dystopia? The game’s cast of characters helps usher in that horror.

Your journey pits you against surgeon J.S. Steinman or Peach Wilkins, both of which, in the grand scheme of things, have reasons to rage against the Ryan vs. Fontaine machine. Who you can trust between Atlas and Dr Brigid Tenenbaum keeps the player guessing until the game’s final quarter when you discover the truth behind not only the existence of Rapture, but also Jack’s standing in this civil war. It’s still a plot twist that’s hailed in most gaming circles and talked about to this day.

It really is staggering when looking back at BioShock to see how much gaming has come along in 15 years. BioShock added the finer details to existing mechanics and gave way to larger innovations for a genre that was, by then, crawling around like a maddened splicer. BioShock showed that even a normal person descending into madness can be as equally intriguing and horrifying a monster as any vampire or zombie.

Using FPS techniques in horror settings certainly paved the way for games such as Outlast and Layers of Fear to be daring in their visual horror. While Soma and Five Nights at Freddy’s took the colourful art style to heart in their graphical presentations. It’s not really something you tend to think about, but when you play most modern horror titles, BioShock’s mark is everywhere.

BioShock was the lightning plasmid in a bottle that Irrational tried to replicate with subsequent sequels, but it arguably never quite felt the same. Where the current gaming landscape looks to churn out safe, fun, but ultimately unremarkable AAA experiences, BioShock was the outlier, the exception to the rule that if you give passionate developers an inch, they’ll give you an experience that screams countless replays and revisits to that underwater city, somewhere beyond the sea.

READ NEXT: 15 Best Horror FPS Games You Should Play