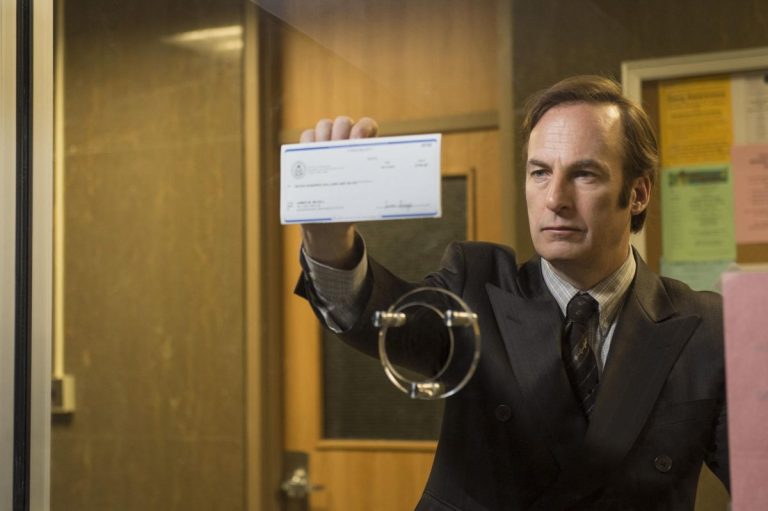 First up, the spoiler-free review; yes it seems like Better Call Saul is well worth your time. If you’ve not seen episode one yet, read on at your peril. Actually, scratch that, go watch the episode. Right now.

The story opens with an older, moustachioed, grizzled looking Saul Goodman (Bob Odenkirk), working at a fast food restaurant, shot in gloomy monochrome. In a bizarre cold open, he works at the restaurant, seemingly terrified by every scary looking bloke who walks in. He leaves to his home, and plays a VHS, containing a recording of the Better Call Saul ads which were a major part of Breaking Bad and looks on forlornly. Clearly, we’re looking at Saul post-Breaking Bad, after repercussions from the Walter White case meant he had to abandon his former life and take on a new identity. This short, wordless cold open is the only hint we get of life after Bad, as the episode catapults us back in time to events taking place before the seminal TV hit.

We go straight into a court case, with Saul defending three young boys for a disgusting, depraved crime, yet it’s a far cry from the big hitting meth deals that have up until now been his forte. Interestingly, I was hit with the sudden realisation when watching this scene that we’ve ever seen Saul in court. Up until now he’d been the Tom Hagen type figure (though, more comic relief than that for sure) only popping up in the plot when he needs to give the lead characters out of trouble.  It’s interesting to see him doing the bread and butter type stuff, and also faintly ridiculous that this is the first time we’ve actually seen him in a court room. While he’s driving off, he comes up against Bad fans’ favourite hitman, Mike Ehrmantraut (Jonathan Banks), who proves a minor antagonist as a toll booth attendant. It’ll be exciting to see him in action as the series continues.

Then, it turns out, people aren’t calling Saul by the name we know him as, his name is Jimmy McGill. If you’ll recall Bad, at one point he actually reveals this, saying that he made his name sound more Jewish to appeal to more customers. It turns out that his brother is being screwed out of the fortune of a company he helped to found (bearing the McGill name), but had to leave through (presumably mental) illness. This scene teases at answers to the question of why Jimmy changed his name to Saul, while stopping short of revealing the full story.

As the episode moves into its final act, it really moves into gear. It involves a caper, by no means at the same high stakes as Bad’s pulsating train heist from season 5, but it feels oddly familiar to that memorable episode. Jimmy, along with two skaters, sets up a situation where one of them will be hit by a car in order to collect lawsuit money. Naturally, as is typical in this universe, not everything goes to plan, leading to the return of another Bad fan favourite. And no, I’m not going to tell you who it is, just in case you ignored my instructions at the top and read on without having watched the episode.

All in all, this is an intriguing premiere. We see the return of a character who, in the original series, only seemed to pop up when the main characters were in trouble, or some comic relief was needed. If Bad was 80% drama and 20% comedy, Better Call Saul flips that on its head pretty much exactly to 80% comedy and 20% drama. In familiar style, the humour is dark, not least in the opening court case in which the details are truly disgusting, yet presented in a way that makes them comic. I’m crossing my fingers for the return of Kuby (Bill Burr) – the ginger guy from Bad who appeared to get Saul, Walt and co. out of a stitch every now and then (remember the guy who drove the truck in the train heist?). I recall hoping for more of him in season 5. Maybe now we’ll get a chance to see him in action again.

It may not shine a candle to Breaking Bad (at least, not yet) but Better Call Saul definitely goes some way towards filling the void that its finale left in all of our lazy, Netflix-laden evenings. I’m sold. Roll on episode two!