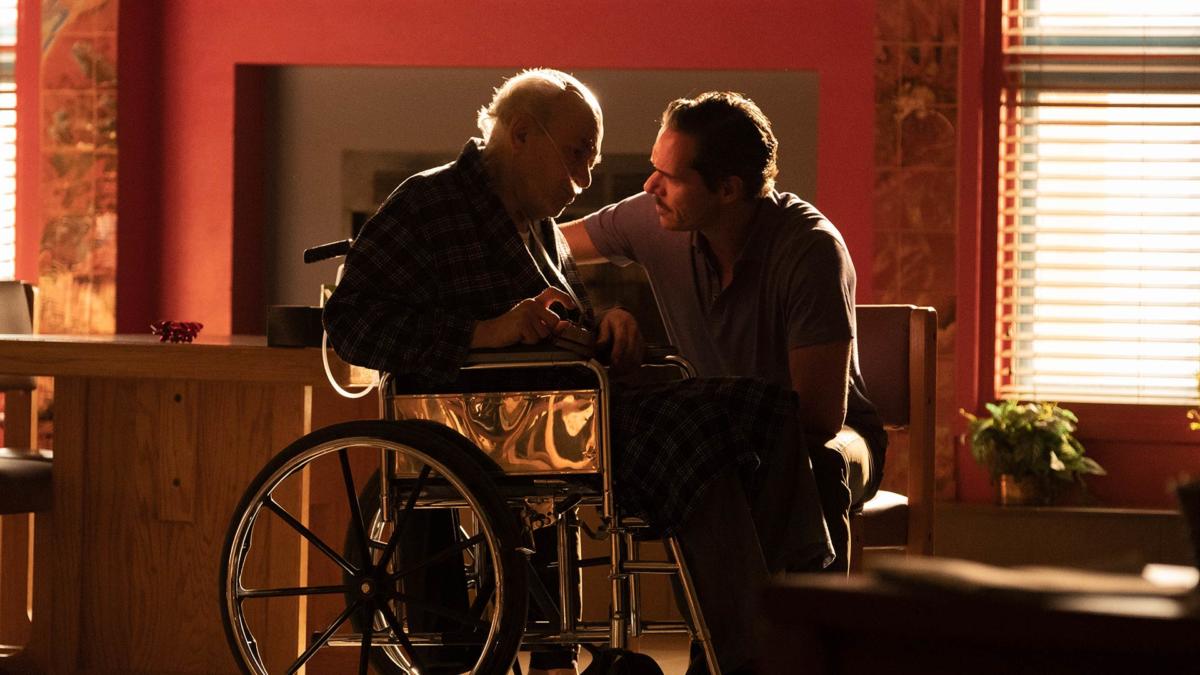 This week’s episode, “Wiedersehen” could alternatively have been titled some German variation of “Welcome”, since every character at this point of the Better Call Saul story is both simultaneously saying goodbye to an old life and hello to a new one. We start with Kim pulling off another law-bending con, then we jump right into Lalo gifting Hector his only means to communicate and leave a lasting impact on the far future ahead. Soon as Hector begins ringing that bell incessantly, it harkens to his last few moments alive with Gus in Breaking Bad’s “Face Off”, and while we’ve been anticipating an explosive moment all throughout Season Four of BCS, it doesn’t happen in the underground super lab demolition where the word “Wiedersehen” is spray-painted – instead, a much deeper internal explosion occurs on the rooftop of a parking garage between Kim and Jimmy.

“Wiedersehen” is Gennifer Hutchison’s thirteenth episode writing for the Gould-Gilligan universe, and it’s served well by the overall season’s tightly written subplots, as they’ve all culminated in frustrated pairs: Gus and Hector, Lalo and Nacho, Kim and Jimmy, Mike and Werner. “Wiedersehen” is a farewell expression, and it serves this episode to multiple degrees: we’ve said goodbye to Chuck, to Wexler-McGill, to the Salamanca Twins, and to the world we mostly recognized for the previous three seasons, but we also know in this universe that nothing is ever truly gone. Characters reappear in flashbacks, and sins of the past will rear their ugly head at the worst times.

We’ve learned with Nacho how there’s no clean escape from the dark ABQ underbelly, just as Mike has learned time-and-time-again since Season One and throughout his whole life beforehand. It’s how we know that Werner’s goodbye won’t end well. This universe will offer its characters warnings – Werner’s loose detonation wires, Kim’s rest-deprived car wreck – but it will also offer them an equal amount, if not more, of temptation. And Jimmy is no different. His entire life is comprised of a series of events where Past and Future continually collide. 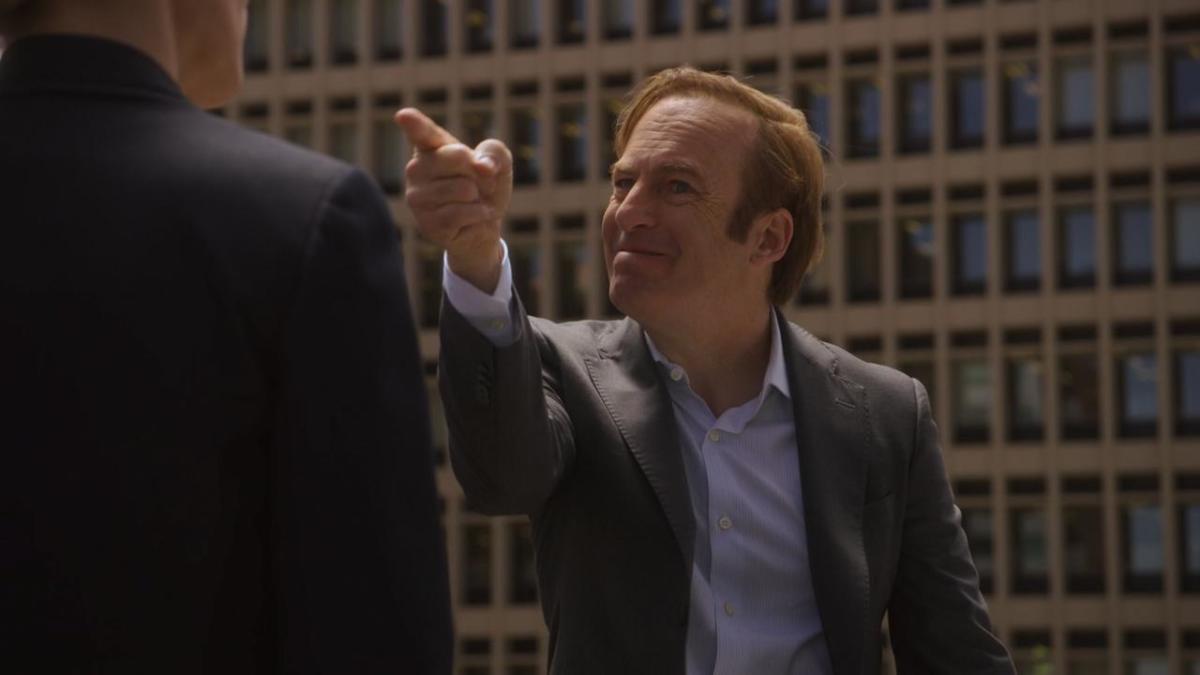 In the same way that Gus’ super lab construction has taken some unforeseen turns, and those original eight months have now turned into an extra whole year, Jimmy is an unfinished project of a person. He’s as dark and hollow as that underground blast zone, and for the first time we get to hear him say what the law truly means to him. He thought he could be so much more than he was. Taking that mailroom job and making friends and meeting Kim helped him realize a future where he could utilize all of the skills he had accumulated through years of missteps. Instead of being Slippin’ Jimmy, he could be James McGill, Esq. He’s a self-made man, ready to make the universe bend to his will like a true “Charlie Hustle” as Howard would put it.

When one of the Committee members asks him what the law means to him, he clearly doesn’t know what to say. A German expression that might come in handy here would be, “Aller Anfang ist schwer” or “Every beginning is hard”. Jimmy wasn’t dealt the cleanest hand, and he speaks to that truth. All heart, no showmanship, no sugarcoating, yet no mention of Chuck. It’s one of those rare instances where lying would be the right thing to do, but instead, Jimmy gives us one of his sincerest moments – and it’s this moment that screws him out of regaining his law license.

It’s also a moment that deeply contextualizes the future ahead: had Jimmy returned to the law now, he might never have become Saul. A whole other year means a whole lot more trouble to come, and all because he refused to give his brother any credit – and to that point, why should he? Chuck may have put him in the mailroom, but it was Jimmy who pushed himself to pursue a law degree in the first place. Nobody but Charlie Hustle could do that. Chuck never wanted that future, and this is one more nail in the coffin when it comes to Jimmy’s perception that the universe never wanted him to succeed, or, as Kim so eloquently phrases it, the perception that “You’re always down.”

Vince Gilligan returns this season to direct, giving some familiar territory a fresh new look. Following their rooftop parking garage argument, Jimmy arrives home in one of the most beautiful shots of the episode – the bedroom mirror is used as a divider to give the appearance of there being two sides, Jimmy and Kim separated, but as he gets closer, he appears in the same shot as her before she joins him in the bedroom, looking into the same mirror. They are no longer fully who we once saw them as, but fully realized reflections of their former selves. He knows what he wants, and she wants him to have it.

It’s just like Jimmy says to her in the diner after celebrating another successful con together: “A lot of people are going to be begging for the Huell Babineaux treatmeant. Our powers combined.” To that, she says how they should only use their powers “for good” – then, masterfully, his rebuttal is, “What are we considering ‘good’ as of 9:06 PM tonight?” If Chuck could witness this moment, he would appear livid and smug all at once – “Jimmy, this is what you do. You hurt people, over and over and over. And then there’s this show of remorse… In the end, you’re going to hurt everyone around you. You can’t help it. So, stop apologizing and accept it.”

When faced with the future, not every character behaves the same. Nacho decides the best course of action is to remain patient and talk less. Portrayed brilliantly by Michael Mando, Nacho has navigated an array of obstacles over these past four seasons. Nacho is methodical and observant, traits that could easily be mistaken for confidence – Mando knows how to convey this cool persona with an underlying tension – we, the audience, can see how uncertain of the future he is, because that is when he’s his most silent.

Werner is very similar in this regard, often the first to make conversation but much quieter under the threat of death. In what was quite possibly the scene with the highest amount of tension this season, Werner nearly breaks down from panic before reconnecting the wires. While Hutchison’s script no doubt called for it, Gilligan’s direction, along with their incredible light and sound departments, helped to palpably illustrate that fear. We’re forced into a darkened shot, and Werner’s crying almost sounds separate from him, as if it’s coming from elsewhere, and we’re not focusing on whatever it is that he’s seeing – it’s perplexing and frustrating in a matter of seconds, until we realize, along with him, what he has to do. 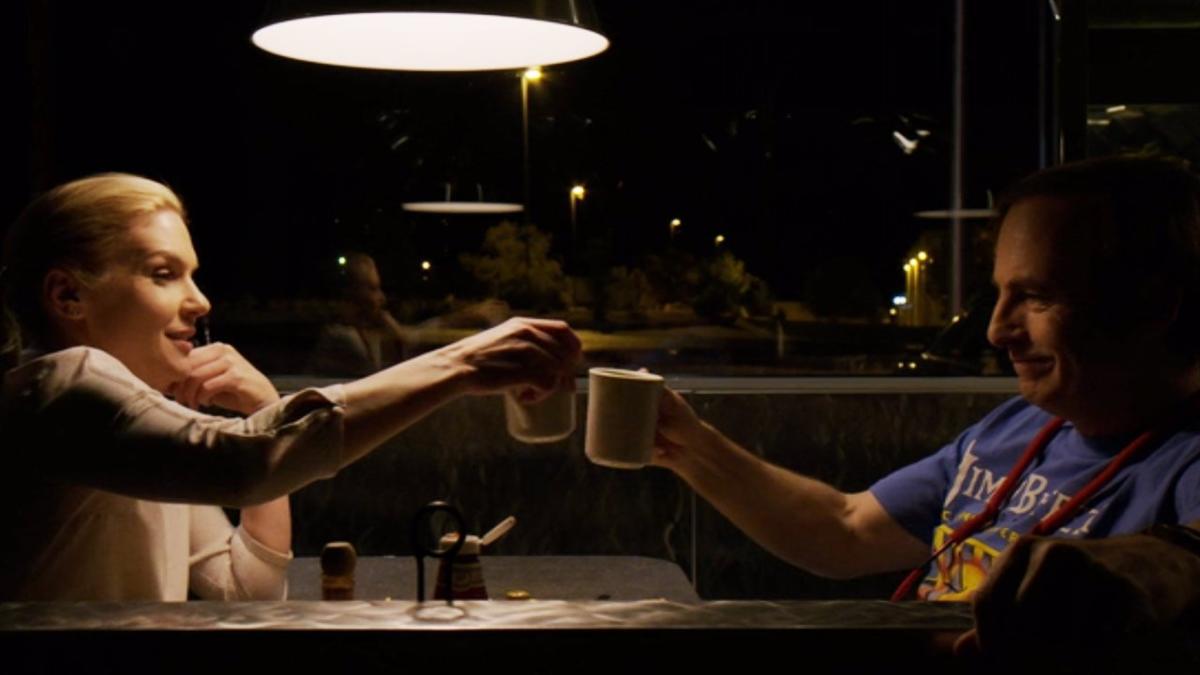 What does the future hold, and how does that compare to your expectations? It’s a weighty question that, going into the finale next week, all of these characters are contending with. Gus wants his super lab, and Mike wants those plans to go smoothly as possible. Werner wants to return home to his wife. Nacho is biding his time to make an escape with his father, and Lalo’s primary concern is his family – no surprise there, as Hector Salamanca had once told his twin nephews, “Family is all.” Elsewhere, that phrase might fall on deaf ears, at least in the case of Kim or Jimmy, or even Howard – speaking of, the last time we checked in with Howard, more than eight months ago, HHM was struggling to keep afloat – and what does Howard want? This is the first chance he’s getting to feasibly ask himself such a question.

Without a father or a McGill brother to stand in his way, what does the future mean to Hamlin? To the same point, without Chuck, what does the future mean to Jimmy? He’s finished with thinking about Chuck, and yet the universe continues to affront him with the question. It’s a question that, in the same way that Werner is willing to risk everything to see his wife, Kim knows the answer. She knows what she wants. She might also stubbornly realize that it’s best not to get too attached to anything – for this, there’s another apt German expression: “Alles hat ein Ende, nur die Wurst hat zwei” or “Everything has an end, only the sausage has two.”

– This has been quite possibly one of the most structurally complex seasons of the show, and the whole ABQ crew has managed to pull it off without managing to overstate a thing. I hope Vince Gilligan feels reaffirmed that this is no AfterMASH.

– We get to see Kim painting the World’s 2nd Best Lawyer thermos, along with giftwrapping a new briefcase with the initials JMM, just before his rooftop freak out where he accuses her of not believing in the best of him. I wonder if Jimmy will ever receive these gifts and under what circumstances.

– Every writer/director/editor combination always manages to demonstrate Mike’s thought process without the need for any dialogue. They’re some of the most fun sequences to watch.

– I don’t know what else to say. I’m just excited and sad and so many other things about this coming Tuesday.

Catch up on our previous Better Call Saul reviews here.