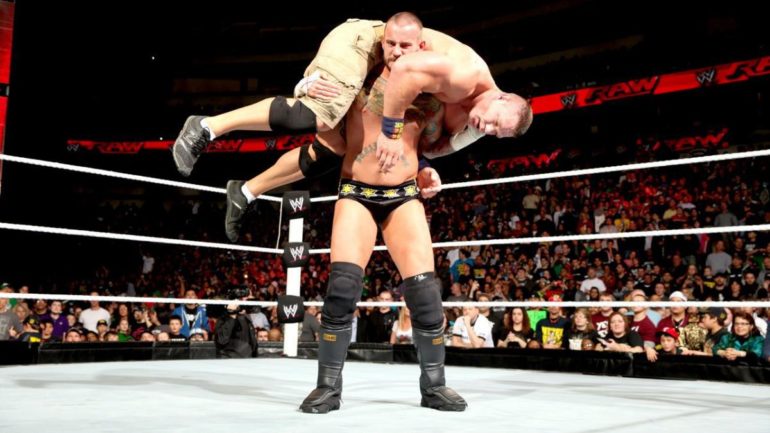 WWE have made sure that they own a wrestler’s gimmick, name, theme and soul since time immemorial. While sometimes a superstars previous gimmick may sneak through from a previous promotion, such as Broken/Woken Matt Hardy, the theme song always seems to be a WWE produced track.

Jim Johnston and CFO$ have given us plenty of great entrance music over the years: from Johnston’s ‘Graveyard Symphony’ for The Undertaker and ‘I Won’t Do What You Tell Me’ for Steve Austin, to Shinsuke Nakamura’s ‘Rising Sun’ and Bobby Roode’s ‘Glorious’ by CFO$.

However, the WWE originals are not the ones we are focusing on today. Let us have a look at the ones that were outsourced, where another artist’s vision better suits a certain character than whatever the WWE music department could envision.

Even though it may receive reactionary boos as soon as the first note hits, ‘The Time Is Now’ is still a good song. Written for the 2005 WWE/Columbia produced album ‘You Can’t See Me’ by John Cena & Tha Trademarc, it has become a signature part of the polarising superstars image.

I’m not personally a fan of such obvious sampling, I prefer it to at least have some attempt at subtlety, though it is a good use of the samples- have a look for yourself at where the iconic horns actually came from here.

The WWE Hall of Famer Fred Durst’s band allowed their 2000 track to be used by The Undertaker during his misguided biker phase. The song perfectly suited what ‘Taker was going for at the time as well as pairing with the raucous style of the Attitude Era.

It goes to show how radical of a change Mark Calaway’s character undertook at this time when you try to imagine The Deadman coming out to this angsty rap/rock classic? As much as I don’t like the band myself, I have to admit that it is a cracking tune. My personal dislike for this time in The Undertaker’s career is what keeps it this far down the list.

Whether it’s the smash of glass or The Rock shouting “If you smell…”, the start of an entrance will always get the biggest pop, this is what you get from the power chords of ‘Real American’. The song is synonymous with the character of Hulk Hogan, it’s so perfect in fact that you’d think it was written specifically for the character, but it was actually just written by Derringer as a generic track for the WWF to use in Vinny Mac’s ‘Rock and Wrestling’ push of the mid-eighties.

If I could have used Hollywood Hogan’s use of Voodoo Child, I would, but that was more of a WCW thing.

Ok, so it’s not that good of a song, but it does make for an incredible wrestling theme. The electrifying combination of: pyrotechnics, the guitar riff, the lighting and the intimidating figure of Kane join together to make one of the greatest entrances of all-time.

The decision came in the early 2000s to give Kane’s entrance some lyrics. The task was given to Finger Eleven who took inspiration from Jim Johnston’s marvelous original and made it their own. It coincided with what you could call “Workrate Kane” where ‘The Big Red Machine’ started to show off how a big guy could really move, echoing the likes of a young Paul Wight.

A big composition to match a big character. One of the most colourful, charismatic and talented wrestlers in WWE history, ‘Macho Man’ embodies the true “Superstar” moniker and managed to stand out in a time when everyone’s character was simply, bombastic.

Savage was not the first to use this as a theme, in fact Gorgeous George – arguably the first real wrestling gimmick – was the first to use ‘Pomp and Circumstance’, though the theme is more associated with Savage.

Still, the 1901 composition suited ‘The Macho Man’ perfectly and has been the backing for some of the biggest moments in wrestling history.

Found by Wyatt himself from a library of unlicensed music. The newly retitled ‘Live In Fear’ may not have the grandeur or showmanship that the rest of this list possesses, but what it lacks in that regard it more than makes up for in character and tone.

It completely stands out from the rest of the modern, overproduced, dull themes of today’s WWE and it can still give the same powerful effect that the big, shouty songs do. Plus, The Fiend’s remix is great though it’s a bit too far from the original for this lists inclusion.

If the edits that the WWE made to ‘Metalingus’ were part of the original track then it would easily make the number two spot, I believe they improved the track and make it more impactful.

While the original is certainly not a bad song, the WWE took it and turned it into what an entrance theme should be. Superstars the likes of ‘The Rated R Superstar’ are what gave the WWE’s PG Era the kick it needed to maintain it’s edge, pun definitely intended, after the Attitude Era went away.

Another find from the world of unlicensed music. The drum beat and bassline made for one of Wrestlemania’s greatest ever pops at WM 33 upon The Hardy Boyz return. It may have been expected, the majority of the crowd were chanting “Delete!” before they even came out, but it doesn’t stop it from being a special moment.

Even if you discount the Hardy’s three-decade spanning career, the return alone solidifies Zack Tempest’s place on this list.

As synonymous with Stanley Kubricks ‘2001: A Space Odyssey’ as it is with Ric Flair, the 1890’s score has managed to become iconic in multiple mediums. It gives the heelish Flair a feeling of grandeur, that he is better than you or anyone else.

Classical music has been used a lot throughout wrestling – think Daniel Bryan, Jerry Lawler, Mr Perfect, etc – but none have been as successfully utilised as Flair. The theme sticks with me personally because of Ric’s retirement match at Wrestlemania 24, with it being my all-time favourite Wrestlemania moment, before he ruined everything with the return that is.

It’s just perfect, isn’t it? It’s the complete package: ideal for the character, a really good song, a pop worthy intro and has left an indelible mark on the wrestling landscape. Most of you will be divided between ‘Cult of Personality’ and Killswitch Engage’s ‘This Fire Burns’ for CM Punk’s best theme. Killswitch’s song could make the list itself, but for me the Living Colour classic fits so much better.

Chants of “CM Punk” are still heard around the world of wrestling today as fans wait in tense anticipation for a return that will probably never happen, but we can still hope.

So that was my top ten entrance themes in WWE that the WWE didn’t write. I’m sure I’ve missed your favourite, so let me know what that is in the comments below.