Time to Switch things up. 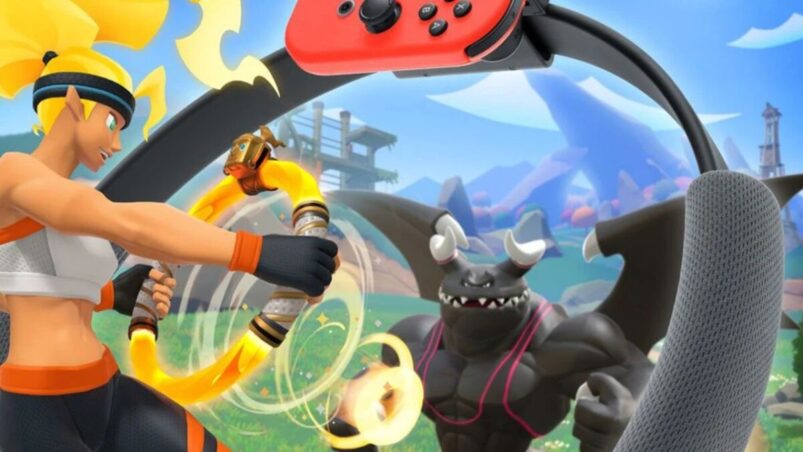 The Nintendo Switch is one of the best consoles around, no matter the time of year, but boy does it come into its own during the holiday season. Still unquestionably the ultimate family console from the ultimate family games manufacturers, the Switch’s popularity has ensured that endless Christmasses nodding off in front of the TV have been replaced by the white-hot thrill of Mario Kart 8, Super Smash Bros. or Luigi’s Mansion 3.

Brilliant as the base console is, it’s certainly not hurt by having a few little tweaks and additions added to make it the best it can be. Cake is great, but cake with whipped cream, extra icing and a sparkler sticking out of it? That’s better. Here are the best Nintendo Switch accessories and gifts just in time for the festive season. 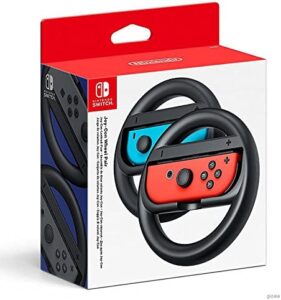 If you love racing games, it is an absolute necessity that you buy yourself a proper steering wheel to match. Check out any pro-gamer-racer online and I guarantee you they’re all using bucket seated chairs and replica steering wheels as they belt round on Forza Horizon 5 making Lewis Hamilton look like Mr. Magoo.

It’s no different for the Switch. The Joy-Con wheel package comes with two items, meaning that you and a friend can slot your respective controllers into a wheel apiece as you prepare to take things far too seriously. Absolutely ideal for the likes of Mario Kart 8 Deluxe or Team Sonic Racing, the Joy-Con wheels are a cheap and cheerful necessity for anyone who loves leaving their opponents in the dust. 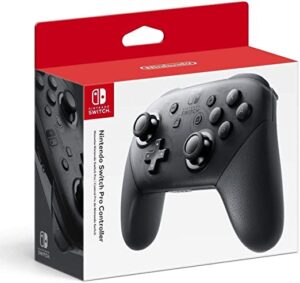 The Nintendo Switch is a great bit of kit, but if we had one small criticism, it would probably be the controllers. They’re perfect for slotting straight into the console itself, but when you want to plug into the big screen (and you will if you’re playing something like Breath of the Wild) you’ll need a proper, adult-sized controller.

That’s where the Pro comes in, a solid, a heavyweight piece of kit that looks and feels most akin to the classic Xbox design for the 360. Nintendo does offer a standard skeleton controller into which your pair of Joy-Cons can slot to form a single unit, but the Pro is the one to go for if you want your Switch experience to feel truly authentic thanks to its motion controls, wireless play and HD rumble feedback. 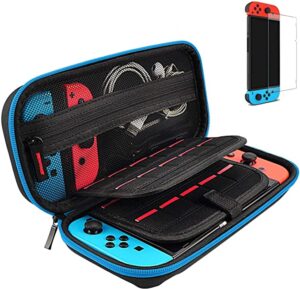 Pretty much the entire point of the Nintendo Switch is the fact that it’s a portable gaming device that you can take anywhere. In fact, when it launched back in 2015, that was the central USP Nintendo used to attract hordes of potential customers, young and old, who were enamored by the device that could seemingly do it all.

The Switch delivers on its promise of fantastic mobile play, but if you’re going to get yourself one and spend your life carting it around on holidays, across continents or just on the local bus, you really need to get a case for its protection. The Daydayup Switch Case not only gives the console a sturdy protective shell to prevent any damage, but its carefully considered layout also provides space for your earphones, game cartridges, controllers and charging leads. A great bit of design for a pretty paltry price.

Besides the understandably small controllers, the Switch does have another potential drawback: storage. It’s a reasonable flaw given that this is supposed to be a portable piece of hardware still capable of rendering AAA games in shiny HD, but that diminished size, especially with earlier iterations, does come with slightly decreased memory capacity.

128GB makes it one of the best Nintendo Switch accessories, but you can go for 256GB for around $50 instead if you want to be on the safe side. 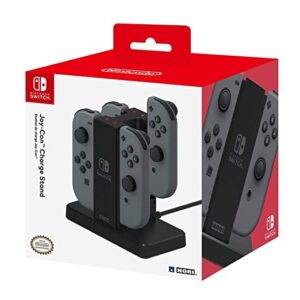 Your Joy-Con controllers need charging, and while it’s possible to give them a juice boost by simply plugging them into a standard Charging Grip and plugging that into the Nintendo Switch port, it’s useful to be able to stick four controllers on charge at one time for when you’re hosting a party and everyone’s desperate for play split screen Mario Kart.

That’s where the Hori Charge Stands comes in. While not a Nintendo-manufactured product, the Hori Charge Stand is officially licensed by the Japanese studio so you can be assured it’s not just some piece of cheap tat that will break after five minutes and leave some rather disgruntled house guests without a controller.

With the ability to charge up to four Joy-Cons at once and with LED indicators to show their charging status, the Hori Stand is ideal for big families and social butterflies during the festive season.

Gamers love all things retro, and you don’t get more retro than the original Gamecube controller design lovingly repurposed for the Nintendo Switch. Crossing eras of proud Nintendo gaming history, the GameCube replica controller plugs straight into the Switch console as though the pair were made for each other.

You can get your hands on various themed GameCube-style controllers courtesy of Nintendo and their licensed manufacturers, many of which come in variously themed skins and designs such as Pikachu, Mario and Princess Peach.

If you want to bring the good old days back to your living room, there’s only one controller for you. 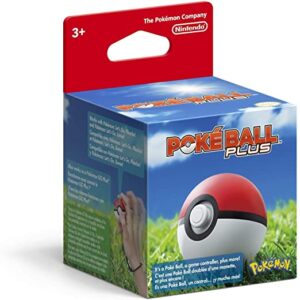 The Poké Ball Plus controller accessory is a gimmick, but what a gimmick. There is no child of the 90s or 2000s who didn’t dream of having their own Poké Ball on hand so that one day they could snare a roving Jigglypuff or a wild Spearow.

The Poké Ball Plus is designed to go with the Switch’s very own Pokémon: Let’s Go Pikachu, Let’s Go: Evie and Pokémon Go. Instead of using your Joy-Con controller, you can instead use the PBP to battle with Pokémon, moving your ball to simulate the action of catching an actual Pokémon in the wild.

Plus it rumbles, lights up and vibrates when you’ve caught your helpless prey. If you’ve got a friend or child who can’t get enough Pokémon, there’s no cooler accessory for the Switch.

If you want to buy Switch games via the virtual Nintendo eShop, you’re going to need some online currency in order to do it. Yes, you can also buy physical copies of most games through places like Amazon, but it’s fast and easy to download titles straight to your console.

Nintendo eShop Cards are billed as a “fast, easy, and safe alternative to credit cards when purchasing games and other content in Nintendo eShop”. 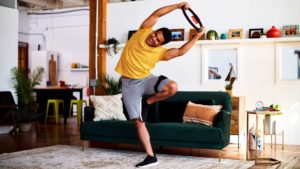 The games industry has been trying to integrate fitness applications into its remit for years. However, the closest we’ve ever truly come to games making players fitter was the augmented reality thrill of Pokémon Go!, or the exertion of a frantic scramble for the last PS5 on Black Friday.

Ring Fit Adventure is the most admirable attempt at bucking this trend since the Wii’s brilliant sports package, and while the idea of clicking your Switch controller onto a hollow steering wheel may seem like an arbitrary gimmick, the game itself is diverse, enjoyable, genuinely taxing and impressive in its integration.

There’s a main adventure mode in which your physical moves with the ring will help best a dragon called Dragaux, as well as several mini-games and a fun rhythm mode in which players move in time to an actual soundtrack.

Definitely one of the best Nintendo Switch accessories for Christmas, especially if you plan to spend Jesus’ birthday drenched in sweat trying not to regurgitate your roast dinner and a whole tin of Quality Street.

Augmented reality is the future – just look at Pokémon Go for proof. The Mario Kart Live Home Circuit is the perfect use of augmented reality, combining the real-life childhood excitement of building your own imaginary race track at home with the brilliance of the Mario Kart universe.

Mario Kart Live can be a lot to get your head around at first, but once you understand what’s going on it’s a truly innovative piece of tech. By placing a series of gates and obstacles around your living room, you can then use the Switch itself to control your little plastic cart and see your course come to life on screen.

An awesome gadget that children especially will go crazy for, Mario Kart Live is why augmented reality was created. 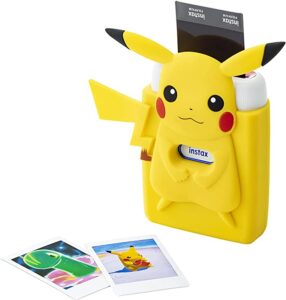 The Instax printer is a fantastic little accessory, a versatile gadget that allows you to immediately print physical polaroids of your smartphone or Switch screenshots instantaneously.

All that’s required is that you download the free app, hook up the Instax Mini to your console and then print your chosen screenshots in just over 12 seconds. You can even have it with its very own Pikachu case for when you’re chasing down critters on the many Pokémon games licensed exclusively to Nintendo’s handheld powerhouse.

A really clever and charming piece of tech. 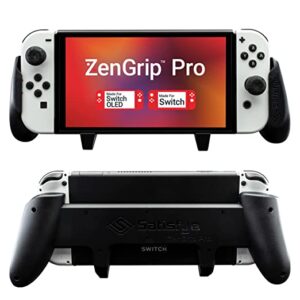 The ZenGrip Pro is unquestionably one of the accessories of choice for gamers who like to take their sessions on the Switch a little more seriously.

A skeleton-frame backbone which provides slots for the two controllers on either side of the console, the ZenGrip Pro is the ergonomic standard for products of its type in the market today.

Durable, easy to fit and very comfortable in-hand, the ZenGrip has earned rave reviews online for taking handheld Switch play to a new level of comfort and accessibility. 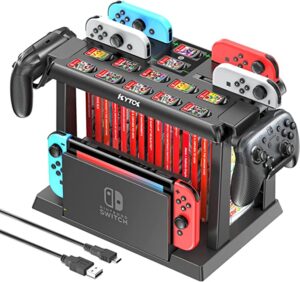 Brilliant as the Switch is, it does come with a lot of moving parts. There’s the console itself, then the charging dock, the Joy-Con controllers, games cartridges, power leads, cases, the list goes on and on.

The Kytok Organiser Station is designed to bring harmony to your many Switch accouterments, giving you peace of mind that everything you need is handily stored in one place.

It even comes with holders for two Pro Controllers plus charging slots for the Joy-Cons themselves. 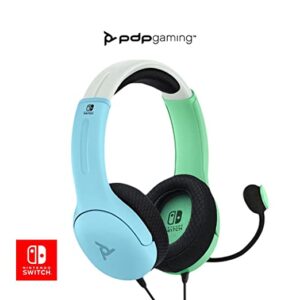 Decent gaming headphones at a reasonable price are hard to come by, but it’s hard to see the drawbacks of an item as modestly priced as the LVL40 Gaming Headset.

Specifically designed for the Switch but also compatible with tablets, PCs and even the Wii, the LVL40 headset comes with stereo sound capabilities, a noise-cancelling microphone, foam ear inlays and a choice of styles and colors. Not bad for less than 20 dollars. 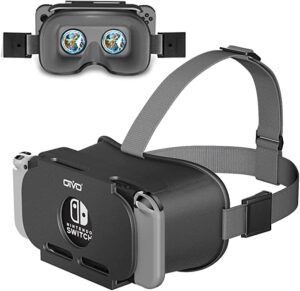 Yes, the Nintendo Switch does come with VR capability, albeit one that’s limited to select games and applications.

The Orzly VR Headset is designed to be a cheap and cheerful piece of equipment that works with multiple devices including PCs, smartphones and the Switch itself. Compatible with YouTube, Super Smash Bros., Super Mario Odyssey and Breath of the Wild, the Orzly Headset is a completely new way to experience the Nintendo Switch.

READ NEXT: 25 Best Batman Gifts and Merch For Christmas 2022