The perfect laxative while on the toilet. 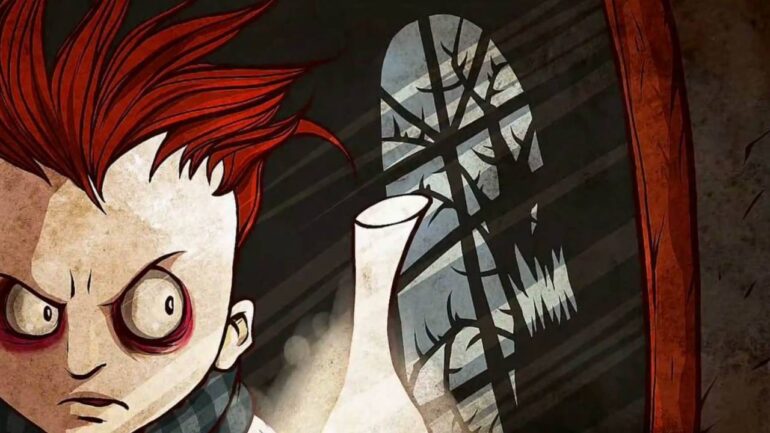 Horror fans are always looking for their next fix. Once a new horror game drops, they jump on it without pause. Unfortunately, the experience of playing a new horror title was typically relegated to our own four walls. Thanks to the advent of smartphones, though, we can now take the best mobile horror games on the go.

I know, I know. Many of you are going to gag at the concept of “good’ mobile games – but they do exist. Especially in the horror genre. Still skeptical? Well, here are 15 examples of the best mobile horror games that are sure to send phones flying across the room.

You typically want to run from developers that feel they need to title their games with things like “Scary Thriller” or “Creepy Horror Game.” However, the minds behind Eyes are simply stating facts.

Trapped within a labyrinthian mansion, players find themselves being pursued and stalked by monstrosities from beyond the grave.

It’s a surprisingly deep handheld experience that delivers on its promises of a variety of monsters, including a fun “create-your-own” option, and different gameplay modes to extend the horrifying experience.

With a decent array of levels to explore, you’ll be playing Eyes: Scary Thriller for quite a while.

Would you immerse yourself in untold terrors if your family went missing?

Sinister Edge tests your resolve with a VR experience that puts you right in the middle of the horrors. Or, you can play with a traditional virtual joystick, which is less “in your face,” but still equally as striking. This completely free horror adventure touts “mindblowing 3D graphics,” and it really does deliver.

Sinister Edge is surprisingly atmospheric and full of puzzles sure to leave you stumped. Every locked door hides something more menacing than the last.

13. Evil Nun: Horror in the School

I’m not going to make the overly generalized and partially offensive statement that nuns are scary. I will say, though, that the nun in Evil Nun: Horror in the School is a terrifying monstrosity that no one should want as a Sunday school teacher.

Roam a haunting school, using whatever you find to solve puzzles and escape the grasps fo the deadly nun. The only salvation is your escape, which won’t be easy in this brutal, mobile horror adventure sure to give some flashbacks to their schooling years.

Originally released on PC, Knock-Knock is a stylish horror game that sends players to a cabin deep in the eerie woods.

Though lodgers before never complained of anything sinister, the cabin now comes to life with grizzly horrors. The thick of the forest chips away at your sanity as you struggle to survive the night and avoid becoming a snack for the creatures lurking in the shadows.

Hide from your pursuers, fix up the dilapidated cabin, and keep the lights on to survive long enough to uncover the truth behind the looming darkness.

Take your zombie-slaying wherever you go with the acclaimed Dead Trigger 2.

While first-person shooters can be a little shaky on mobile devices, MADFINGER Games created a playable experience that uses touch control or an enhanced virtual joystick to pit you against hordes of the undead.

Arm yourself with an array of deadly melee weapons and firearms to lay waste to your shambling foe. Stronger zombie types threaten to impede your progress, but your available arsenal includes everything from chainsaws to miniguns.

It may sound innocuous enough, but Thimbleweed Park holds a secret, and it all revolves around the five strangers forced to spend a night amidst its abandoned ruins.

A ghost, two agents, a clown, and an aspiring game developer have their own connection to Thimbleweed, and it’s up to you to uncover it. And while you’re at it, maybe figure out what’s going on with that dead body beneath the bridge.

Thimbleweed Park stretches from a dilapidated circus to a haunted hotel and the charred remains of a pillow factory, tasking players with solving puzzles to uncover the truth behind this seemingly random quintet.

9. Bendy and the Ink Machine

How bad would things be if the creations from your mind came to life? Bendy and the Ink Machine explores this idea by introducing players to Bendy, a cartoon character crafted by Joey Drew.

As Henry, players are immersed in the strangely horrific world of Bendy and the Ink Machine, where corruption has overtaken Bendy’s friends and enemies. The twisted world is full of puzzles as Henry works to uncover the truth behind the titular ink machine and the creations immerging from it.

The mobile port doesn’t quite hit the same notes as the console and PC release, but all five chapters offer a delightfully weird experience that’s enjoyable even on a smaller screen.

You wake up in an asylum, the physical remnants of a car accident covered in bandages layering your face.

Amnesia has set in, and you’ve lost all sense of self, leaving you to piece together your life from the few scattered clues you can find. Unfortunately, those clues are hidden within the twisted walls of the Sanitarium, a place full of fractured minds and madness.

As you explore deeper into the hospital, solving the puzzles that block you from the truth, you find yourself facing a labyrinth of horrors. Sanitarium is a classic point-and-click adventure from 1998 ported to mobile devices. The game features a deep and immersive story spread across a deranged world.

Spread across multiple chapters, Fran Bow follows the titular character, a young girl that witnessed the brutal murder of her parents.

After the ordeal leaves her broken, Fran is admitted into the Oswald Asylum, where her story truly begins. When she decides to leave the asylum and return home to her aunt, Fran realizes she’ll have to navigate a world of psychological horrors.

By taking certain medications, she can transfer between worlds, where the unusual and the borderline horrific help Fran solve puzzles and return home. Fran Bow is presented in a 2D art style and is just as much a delight to watch as it is to play.

You could call CASE: Animatronics a Five Nights at Freddy’s rip off, but Aleson does a fairly good job of finding ways to separate this first-person horror experience from Scott Cawthon’s hit series.

Yes, you are evading deadly animatronics and using a surveillance system to plan your every move, but CASE is a bit more dynamic, integrating elements of games like Outlast into the concept. While the meandering animatronics offer their own tense thrills, CASE throws in hallucinations to keep players on their toes.

It’s a nifty game that stands on its own, whether you’re playing on your Switch, PS4, PC, Xbox One, or mobile device.

It’s rare to find a game that simply looks beautiful on a mobile platform.

The Dark Meadow is stunning in many ways, from the brilliant lighting to the character models of the horrific monsters stalking you throughout the decrepit Montclair Hospital. Phosphor Games Studio crafted a blend of RPG and first-person shooter set to a deep and engaging plot full of twists and turns.

The Dark Meadow has the look and feel of a AAA release and suffers very little by being on a mobile platform. The dark fairytale is the type of game that’s best played while hiding beneath the covers on a dark, stormy night.

The Last Door isn’t going to blow you away with 4K visuals, but that’s not why you pick up a mobile title. You do so for a game that will engross you and help you pass the time. Even if it will cause you to stir uncomfortably when you’re out in public.

The Last Door is a fascinating tale of the macabre that sends players to Victorian England to uncover the demented secrets lying in wait. As Jeremiah Devitt, players will explore haunting environments, solve puzzles, and enjoy the low-res art that still effectively brings this horror experience to life.

How mad would you be if I said one of the best mobile horror games isn’t even available anymore?

The mobile Dead Space game, released in 2011, had all of the makings of a terrible spinoff. First, it was published by EA. Second, it wasn’t developed by Visceral. And third, it was an entirely new story that followed a Unitologist code-named Vandal. As it turns out, though, Dead Space made a smooth transition to a handheld platform.

Sure, a lot of the horror elements were hard to capture on the smaller device, but IronMonkey made great use of what it had to work with. It’s a shame the game was pulled from app stores. It was fun, was visually competent, and captured the essence of the series’ “strategic dismemberment.”

It’s the game that started an ongoing legacy.

Five Nights at Freddy’s is not an elaborate concept, which makes the fact that it has launched a series of games, merchandise, and even plans for a movie all-the-more unexpected.

As a new security guard at Freddy Fazbear’s Pizza, players must survive the night using the minimal resources at their disposal to avoid becoming prey to the very lively animatronics. Players must be mindful of the power used to check cameras and close shutters, for once it’s gone, up for grabs.

You could describe Five Nights at Freddy’s as an interactive screamer, but there is a bit of strategy needed to make it to the end of the shift.

1. The Walking Dead: Season One

Imbued with the spirit of Robert Kirkman’s beloved graphic series, The Walking Dead: Season One steps away from AMC’s melodrama to deliver a truly fantastic experience.

Developed for PC and consoles, Season One translates surprisingly well onto mobile devices, allowing you to follow Lee Everett and Clementine as they struggle to survive in an undead world. Every choice you make has a consequence and the wrong one could leave your party one person lighter.

Telltale did a wonderful job capturing the tone of Kirkman’s creation while crafting its own story set in the post-apocalyptic world. It’s emotional, raw, terrifying, and tense – so expect to have an embarrassing response if playing in public.

READ NEXT: 29 Dead Horror Game Franchises That Should Rise Again