Settle down for the long-haul. 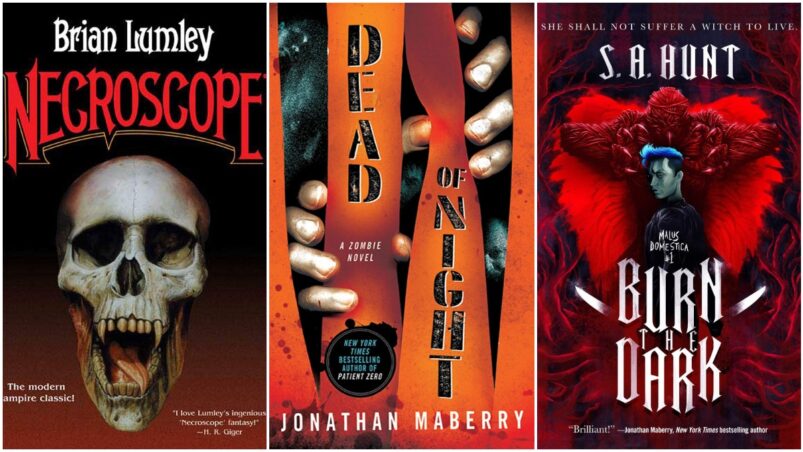 When it comes to the best horror book series, there is plenty of choice; just like science fiction or fantasy, the horror genre really lends itself to a long-running format. It can also be addictive, especially once you find the author for you. So whether you’re new to horror or just looking to immerse yourself in a brand new series, this list of 12 of the best horror book series should have something just for you.

If you’ve never checked out the books on offer on Kindle Unlimited, then perhaps you should start there when looking for a new series to enjoy. The A Riveting Haunted House Mystery series has 17 books so far, all of them with good ratings and reviews from horror fans.

Each volume in the series explores a haunted house mystery, although sometimes the definition of house is stretched; one book explores a haunted school, another a haunted island. But that’s alright; there’s only so many haunted mansions out there. If you like your horror in the style of The Haunting of Hill House, this is the series for you.

Tananarive Due is a busy woman; primarily she is a film historian who specialises in black horror, but she is also a very accomplished author of horror novels, the most popular of which is her African Immortals series. If the best horror book series give something new to readers, then African Immortals is just that; a non-Western centric horror series.

Jessica marries David, a seemingly perfect man. But then people around her begin to die in mysterious ways and eventually David reveals that 400 years previously, he and other people in an Ethiopian sect traded their humanity for immortality. And now David’s brethren want him back.

The Asylum series is a YA horror thriller series with consistently high ratings for all three books in the saga. The books are, unusually, photo-illustrated which certainly helps add to the creepy page-turning aspects of the series.

Dan Crawford, aged 16, turns up to a college prep program to find that the usual housing is out of action and everyone is staying in the Brookline Dorm, a former sanitorium and asylum for the criminally insane. As Dan and his friends exploring the crumbling ruins, it soon becomes apparent that they are linked to the asylum – and there are some secrets that can’t be buried.

The best horror book series selection should offer something for everyone, and if you’re into comic horror, then the anonymous creator of the Bourbon Kid is just the author for you. These books are full of dark humour, thick as treacle. And they’re suitably bloody too, if that’s your thing.

In the town of Santa Mondega, all sorts of unsavoury types – gangsters, bounty hunters, vampires – call the streets home. And there is the serial killer too, known only as the Bourbon Kid. In the first book of the series, The Book With No Name, there’s a book which brings about the violent death of anyone who reads it, a mysterious stone disappears and there is about to be a total eclipse. In the middle of all this, the Bourbon Kid haunts the streets. And things are getting weird.

Stephen King’s The Dark Tower is not primarily a horror series. It mixes all sorts of genres – dark fantasy, western, horror – in one big melting pot. But if you’re someone who prefers a very plotty series, or likes your horror to be tempered, then The Dark Tower might be the best horror book series for you.

Roland Deschain is the last living member of an order known as gunslingers, and the last in the line of his world’s version of King Arthur. Roland is on a quest to find the Dark Tower, a mythical building said to be the nexus of all the universes. Roland’s world is coming apart, with nations at war, whole cities vanishing, and time running however it likes. This is King’s magnum opus.

If you enjoy some zombie horror, then Maberry’s best-selling Dead Of Night series is just the one for you. Maberry is also the recipient of multiple nominations and wins of the prestigious Bram Stoker Award, so you know you’re in good horror hands with his work.

In the Dead Of Night series, a prison doctor injects a condemned killer with a concoction of drugs that will keep the man’s consciousness awake in his grave as his body rots away, The drugs, of course, have unforeseen consequences and the killer wakes up hungry before he can be buried. And he’s also very, very contagious.

Darren Shan is another safe pair of horror hands, and if you were slightly too old to read The Demonata when it first came out, then you should go and check it out now. These books are written for kids but in many places it doesn’t feel like it, and The Demonata stands as one of the best horror book series regardless of who it’s aimed at.

The series has three protagonists who all come from different times – 450AD, the 1970s and the present day. All three are engaged in a fight against Lord Loss, the demon master and his demon familiars, as well as the Shadow, which threatens to destroy the human universe. This series is extensive, with ten books and a whole lot of characters to get to know.

Like The Dark Tower, The Dresden Files is a series that doesn’t immediately strike as being horror. But the fantastical elements of the stories and the huge cast of magical monsters – from vampires to werewolves to fae – are enough to suggest that there is horror here if you want to find it. If you like fantastical horror, this is the series for you.

Harry Dresden is the only ‘consulting wizard’ in a world where magic and the supernatural are real, and in some parts of the world, the magic is winning. Harry takes on cases from human and non-human clients, facing off against all sorts of creatures and beginning to get the feeling that all of the cases he works might be connected.

9. The Girl From The Well – Rin Chupec

The Girl From The Well is a two book YA series which draws on the Japanese folklore story of Banchō Sarayashiki, a ghost story about a servant who was thrown down a well to her death by her samurai master.

In the series, Okiku is spirit condemned to wander the earth. She spends her time finding and killing anyone who has murdered a child, and helps other ghosts find their eternal rest. Then she meets Tark, a teenage boy who has so much evil in his body that he can barely contain it. The Girl From The Well is gruesome, but also has a surprising amount of heart for the story that it tells.

The first book in the Malus Domestica series, Burn The Dark, was Hunt’s debut novel – and what a debut it was. First self-published, the books were so successful they were reprinted by a traditional publisher to allow even more people to get their hands on them.

Robin is a big name YouTuber who has gone viral with her witch hunter series on the platform. What Robin’s fans don’t know is that the series isn’t fictional. Robin’s goal is to get revenge against the coven of witches who wronged her mother, and she will stop at nothing. Malus Domestica is an intensely creepy series of books, and ones that keep readers on the edge of their seats.

The Necroscope series contains 18 books, and has been running since 1986, a testament to how popular the books are. This is absolutely one of the best horror book series for anyone who likes old school horror.

Harry Keogh is able to speak to the dead. As he gets older, he befriends dead people and discovers death is not the end for the mind; the body dies but the mind carries on. Through Harry, these dead people learn to communicate and offer him knowledge in return. But Harry is haunted by bad dreams and eventually he ends up dragged in to a mission to rid the world of the vampire menace.

The Passage is a trilogy set in the near future, telling the story of an apocalyptic event and the zombie/vampire beings who later overrun the post-apocalyptic world, always on the hunt for fresh blood. Cronin’s story spans over 90 years, but some of the cited ‘reference material’ used to help tell the story comes from as far as 1000 years after the outbreak.

Cronin is a very strong writer and his story really carries the reader along. His creatures are rather frighteningly realistic, the result of a human weapons experiment gone wrong, and they are bound to give you the creeps; after the past two years, any reference to a virus is enough to set your teeth on edge.

READ NEXT: The Best Zombie Books To Tickle Your Brain