Check out these juicy reads. 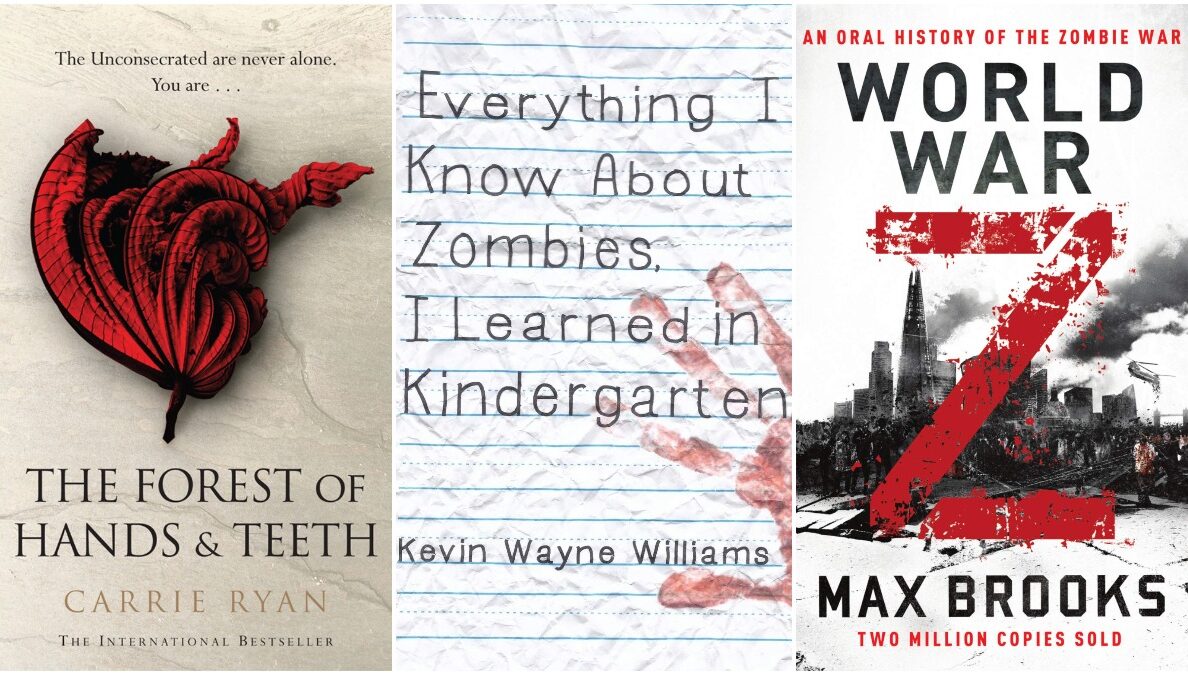 Zombies aren’t everyone’s favourite horror monster, but people who love zombies really love them. There are tons of great zombie stories that could have made a list of the best zombie books, but we’ve chosen to focus on novels that offer a wide variety of zombie takes. There’s something here for everyone, whether you think you like zombies or not. And if you like any of these best zombie books, be sure to check out what else their authors have written; many of them are real masters of the horror genre.

Breathers is not your usual zombie tale, for sure, and that uniqueness earns it a place on the best zombie books list. It’s a funny, rather touching story about life after death – and the reality of living as a zombie in a world that isn’t ready for you.

Andy Warner is recently dead, and a brand-new zombie. He’s been rejected by his friends and by society, but when he goes to an Undead Anonymous meeting, he meets some new friends – Rita and Jerry – who make him feel a bit more normal. But then a rogue zombie introduces them to the taste of human flesh, and Andy ends up embroiled in a lawsuit on behalf of zombie kind. This book is a riot.

Clay, a struggling artist, has just landed graphic novel deal when a signal called The Pulse, is sent out over the global mobile phone network. The signal turns everyone who uses a mobile phone into a vicious, animalistic zombie. Clay has to get back to Maine to find his young son, travelling through a zombie infested New England.

Stephen King is, of course, a horror institution, and his take on zombies is just as original and interesting as any of his best novels. Cell is kind of technophobic and deeply pessimistic, but sometimes the best horror stories are.

Devil’s Wake is the first in a series from these two established horror authors, following what happens when an alien race almost brings Earth to its knees. Both Barnes and Due have real horror chops, and their collaborative effort is a great read – and bound to be one of the best zombie books.

An alien invasion brings a sweeping infection to Earth, an infection that is changing people into not just zombies. They are becoming more deadly than anyone could ever imagine. In the middle of these ravenous hordes and human enemies too, Terry and Kendra have to cross the lonely wasteland that the United States has become.

With Dread Nation, Justina Ireland combined two things that readers love; zombies and alternative histories. Dread Nation is a YA novel, but don’t let that put you off. It’s a really interesting, unique take on zombie stories and alternate history too.

The American Civil War ended the day that the dead soldiers began to walk the battlefields of Gettysburg and Chancellorsville. In the new United States that arose from that, certain children (Native American and black children) have to attend combat schools to learn to fight the dead and protect the majority. Dread Nation is just so creative and unique, it’s more than earned a place on the list of best zombie books.

5. Everything I Know About Zombies, I Learned In Kindergarten – Kevin Wayne Williams

This is one of those indie novels that is in danger of falling under the radar, which would be a real shame because it is certainly one of the more unique ‘plucky band of survivors against the world’ novels. And that is because the main cast of the book are all under the age of ten.

Letitia Johnson has lived a tough life, moved from foster home to foster home. When the apocalypse comes, Letitia locks her little sister’s kindergarten class in a bathroom at school to try and keep them safe. When they emerge five days later, Letitia and the twelve younger kids are alone. And the zombies haven’t gone away.

Feed is a zombie book for people who don’t necessarily want to read all that much about zombies. There are zombies in it, and zombies are mentioned often, but there is none of the usual blood and gore tropes that define many books in the genre.

Instead, Feed is a novel about young investigative bloggers in the year 2039, living in a world decimated by the Kellis-Amberlee virus which turned people into zombies. Georgia, Shaun and Buffy are covering a presidential campaign in this new world, but soon find themselves dragged into a conspiracy that could threaten their lives.

7. The Forest Of Hands And Teeth – Carrie Ryan

Mary lives in a village with a fence, outside of which the Unrelentless are always massing, and inside of which the Sisterhood and the Guardians protect everyone from the outside. But as Mary starts to learn things she doesn’t want to know about the Sisterhood and the Guardians, she has to choose between her village and her future – and the Unrelentless are about to breach the fence.

The Girl With All The Gifts is a profoundly philosophical zombie story, focused on the nature of humanity and written with a very strong worldview that allows readers to immerse themselves in this really very frightening dystopia.

Melanie is ten year old girl who every morning is strapped into a wheelchair and taken to class with other children also strapped into chairs. Melanie is bright and intelligent and she loves her teacher, Miss Justineau. But then two of Melanie’s classmates disappear, never to return, and the true nature of this world begins to unfold before us.

9. The Reapers Are The Angels – Alden Bell

The Reapers Are The Angels is a bit more traditional in terms of zombie novels, but the fact it reads a little bit like a zombie apocalypse western sets it apart and puts it on the list of the best zombie books.

Temple is fifteen years old, born into a world that collapsed twenty-five years before under the weight of a zombie infestation. She’s never known any different to the life she lives, wandering the ruined United States and trying to find the place where she belongs. Temple is a devastatingly realistic character, and she is the best part of this book for sure.

Speaking of zombie westerns, Angela Scott’s Wanted: Dead Or Undead is a much more explicit example of the genre. There’s saloons and stetsons all over this story, and the wild, wild west is alive with zombie hordes.

Red is the capable sharp-shooting woman with a knack for taking out the zombies that are plaguing the west. Trace Monroe is the guy who wants to join her posse, but Red has some rules; no names, no questions and if Trace gets bitten, she’s going to kill him. Trace agrees, because Red is amazing and she’s also beautiful – and all he wants is to try to survive the living dead at her side.

We can’t have a list of the best zombie books without including Max Brooks and his modern zombie classic World War Z. If your only exposure to this story so far as been through the aggressively average movie of a few years ago then do yourself a favour and check out the original. Zombie fans really do love Brooks for a reason.

World War Z is presented as a non-fiction book, a collection of interviews and testimonies from people who have survived the zombie apocalypse that ripped through the world and caused the almost eradication of humanity. What makes World War Z so clever and so compelling is the way that Brooks covers this extinction event from every angle; this is no western-centric story. Survivor accounts come from all over the world, and the only thing they have in common is that everyone is human – and everyone, somehow, made it through.

In much the same way as World War Z, Colson Whitehead covers the zombie apocalypse from a ‘what comes next’ perspective. The plague that turned people into the living dead is gradually receding and the US government is rebuilding. Their first mission; clear Manhattan – Zone One – of the remaining undead.

Zone One succeeds in making zombie clearance seem a little mundane; Mark Spitz is just an ordinary guy working the Manhattan mission. But behind all of that, Mark is a man struggling to come to terms with everything that he’s seen and everything he’s done. Whitehead focuses on the cost to one man’s humanity of living through the end times, and examines what comes out of the other side.

READ NEXT: The Best Vampire Books To Sink Your Teeth Into