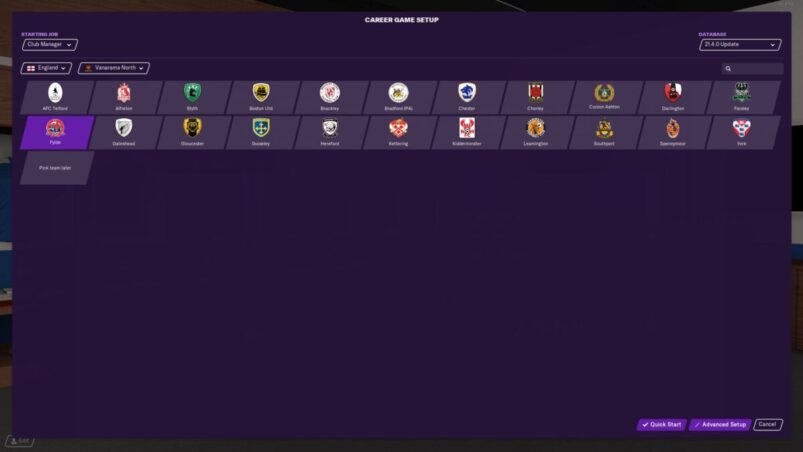 Football Manager is a series that you can play for five minutes at a time or until your wife leaves you and takes your five children with her. Many people play it all year long, but unless you’re super dedicated to the save you start off with, you’re probably after some Football Manager save ideas to tide you over until the next edition rolls around.

From simply taking over a team you never have or battling your way through a league that you’re unfamiliar with, Football Manager saves can take on a life of their own, so much so that you make your own stories and legends. While the natural temptation is to take over the team you support, sometimes it just doesn’t offer a big enough challenge or the unpredictability that alternative saves thrive on, particularly if you’re playing at a bigger team.

Pioneered by popular content creator DoctorBenjy FM, Glory Hunter is a quest for, well, glory. While working against the clock, you have to win every major trophy across the five major leagues and also in European competition.

Sounds fairly straightforward, right? Not when you consider how hard you might find it to get a job in certain countries, or just how little room there is for error. You have to get lucky a lot of the time, especially when it comes to the cups.

Making things even more complex is the time limit. Give yourself 15-20 years to win everything, then start panicking once you reach the tenth year.

Pioneered by unpopular content creator me, The Gravy Train is the opposite of Glory Hunter in that you have to go from troubled club to troubled club and try to keep them up before moving onto the next one.

The Gravy Train works best when starting off at a club midway through the season, strugglers that are mired in the relegation zone with their starting manager already sacked. You’ll have to start off somewhere in a lower division and then work your way up, similarly to the inspiration for this save, Sam Allardyce.

And just like Big Sam, you can’t stay at one club for too long. Once you have guided a club to safety, you then have to resign and look for another club to save, like the naff, low block Batman you are.

Not a completely original concept as it’s basically the bread and butter of Football Manager, but the content creator perhaps best known for saves that go from the bottom division to the top is WorkTheSpace. It’s a great alternative if you’re tired of Premier League playthroughs.

In his saves, he goes from the lowest of English football all the way to the top, whether that’s with one club or hopping from job to job. It’s probably harder to stay loyal than to basically promote yourself with a job in a higher division, but it’s ultimately up to you.

However, there really is something to be said for getting your team promoted up the divisions over time until you eventually reach the very top, keeping some of the same players along the way and becoming club legends.

This is probably one for the absolute Football Manager purists, as it’s going to take an awful lot of time and dedication to conquer every country’s league in the UK. You’re also going to have to deal with some utterly naff football and some very confusing Welsh names at times too.

In whichever order you choose, your job in an FC UK save is to claim the top honours across England, Wales, Scotland, and Ireland. Sure, you can rampage to league after league with Manchester City, but can you claim glory in Cymru North with Bangor City?

The challenge in this save probably lies in trying to get a job in the English and Scottish leagues after achieving success in the relatively minor leagues, but if Dave Hockaday can somehow wind up managing Leeds, you can achieve anything.

Or, how about you twist it on its head: winning it all with an English Premier League team and then joining Drogheda? It’d at least be interesting to see the in-game headlines.

Football is nothing without its rivalries, crazy derby days where the challenges go flying in and the terraces are full of very naughty words. David Becomes Goliath is a Football Manager save idea that thrives on that kind of competition, but with a twist.

Instead of playing as Everton and hoping to definitively overtake Liverpool, why not try it with Tranmere instead? Likewise, instead of outdoing Manchester United as City, have you considered a run with FC United of Manchester? There are many rivalries that have kind of been lost due to a team falling way off the pace, so you can kill two birds with one stone and return a club to their former glory too.

The ultimate goal is to not only outperform your fiercest rival in the league, but also in terms of reputation and global ranking. If you’re playing as a rival that’s down on their luck or just way off the pace, kind of like how Sunderland is to Newcastle or Portsmouth is to Southampton, you have countless hours of hard work to get through.

READ NEXT: Football Manager 2022: How To Add Real Badges & Logos