Seven years after the disappointing series finale, it was announced that the television show Dexter was to return as a ten-episode limited series. Initially, the only individual confirmed to be returning was the titular character of Dexter Morgan, as played by Michael C. Hall. That all changed when it was announced that veteran actor Clancy Brown would be playing Kurt Caldwell, the main villain of the show.

The sixty-two year old actor has been active since 1983, and during that time, has created a legacy thanks to performances such as Sergeant Zim in Starship Troopers, Mr Krabs in Spongebob Squarepants, or Rawhide in Adventures of Buckaroo Banzai Across The Eighth Dimension. Without question though, Clancy Brown has truly cemented himself throughout his career as one of the best actors to portray villains. For those less familiar with his previous work, below are his five best villainous roles, both on-screen and as a voice-actor. 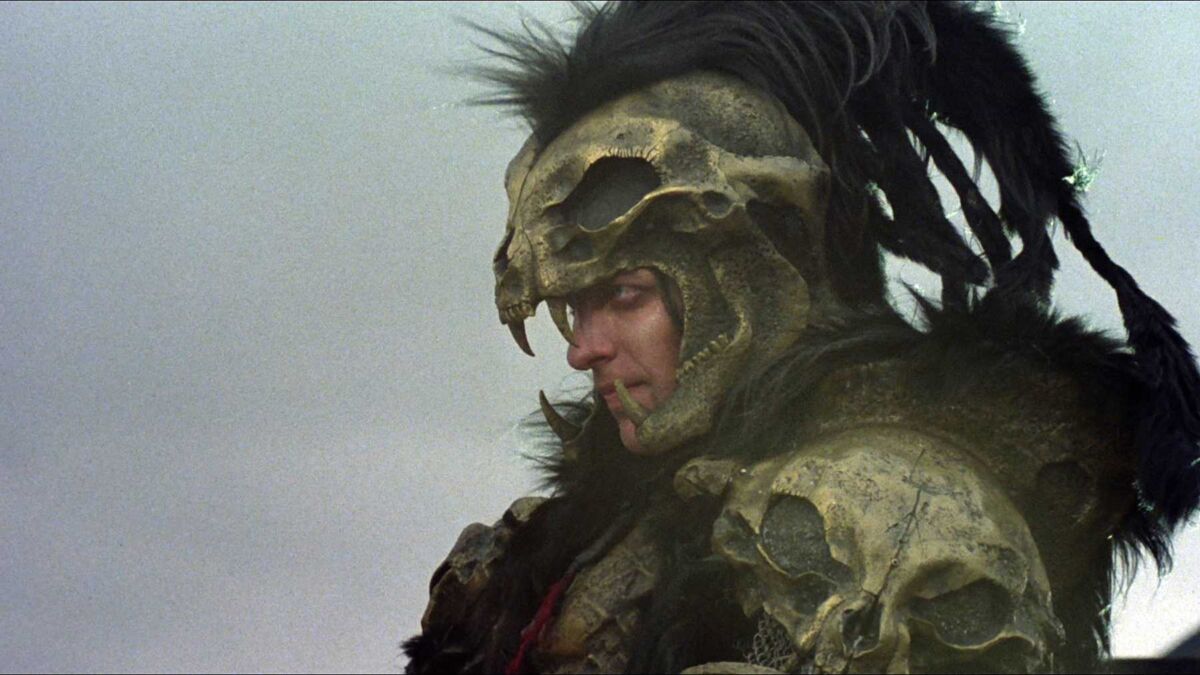 The original Highlander was released in 1986, and has always been considered the best of the franchise, whether compared to sequels, animated spin-offs or television shows. There are multiple reasons for this, such as the enigmatic nature of the eponymous Connor MacLeod, played by Christopher Lambert, or the excellent Queen soundtrack (mixing heartfelt ballads like Who Wants To Live Forever with fist-punching crescendos like Princes of the Universe). Or it could be the movie’s antagonist, Clancy Brown’s The Kurgan, setting a standard too high for others to ever match.

The Kurgan is introduced clad in black armour preparing for battle, a gleefully violent Immortal full of bloodlust. Spoken of in hushed tones as a dreaded monster, Brown’s large dominating figure adds to his intimidating nature, as he takes evil delight in raping and murdering all of MacLeod’s inner circle. But what could have been a very bland evil monster stomping around and killing people was instead injected with a ridiculous amount of personality, creating a hammy, over-the-top performance that is impossible to look away from.

Whether licking prospective victims, sarcastically referring to a terrified old lady as “Mum”, or singing and dancing in a church to the horror of patrons, there isn’t a scene that Brown doesn’t steal. The quintessential love-to-hate villain that combines size, horror and charisma, The Kurgan is still the best antagonist in the Highlander franchise. 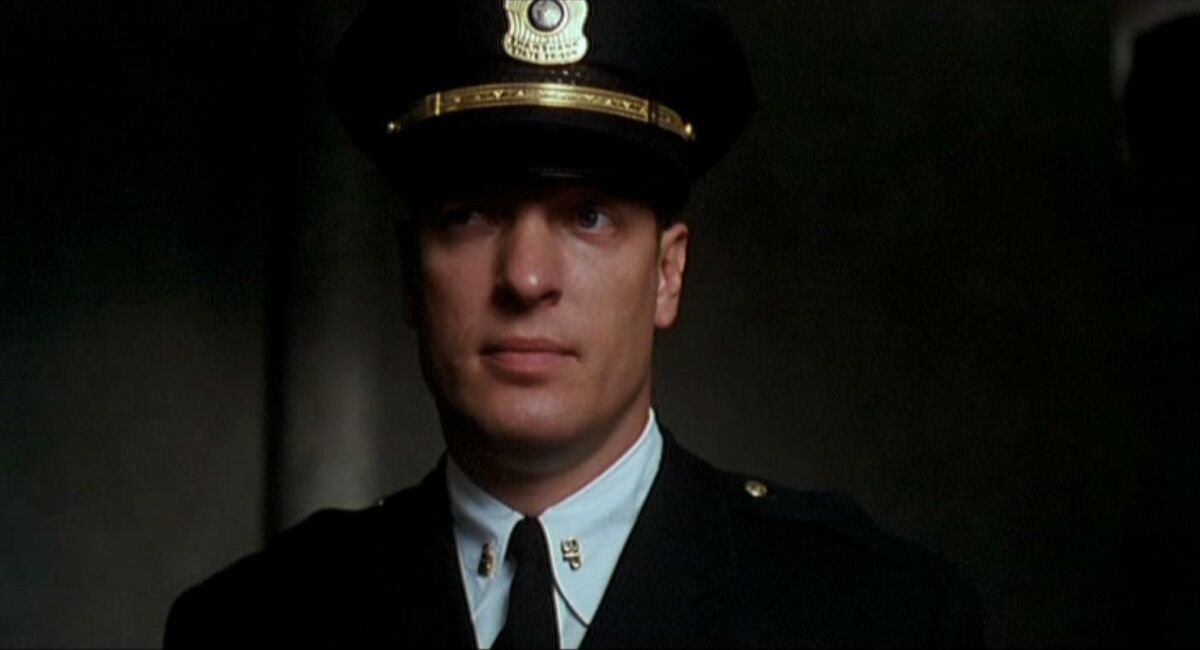 Regularly topping lists of the best movies ever, The Shawshank Redemption is a timeless classic that has only grown more beloved over the decades. The main focus of the story is the friendship between Tim Robbins’ Andy Dufresne and Morgan Freeman’s Red as they survive the long years together in Shawshank Prison. The movie is a collection of celebrated character actors who help build the world around our protagonists, including William Sadler’s prisoner Heywood, Bob Gunton’s corrupt Warden Samuel Norton, and Brown’s Byron T. Hadley, the captain of the prison guards.

Hadley is a much subtler character than The Kurgan, but no less evil, being introduced by viciously beating an inmate to death for being too loud at night. A simmering cauldron of hate and cruelty, Hadley casts a dark shadow over the prisoners as he holds their lives in his hands. His threats carry weight throughout, and the tension when he threatens to throw Andy off a roof leaves the audience unnerved. The contrast between his Kurgan performance and this one demonstrates an impeccable character actor capable of leaving an impact on the watching audience. 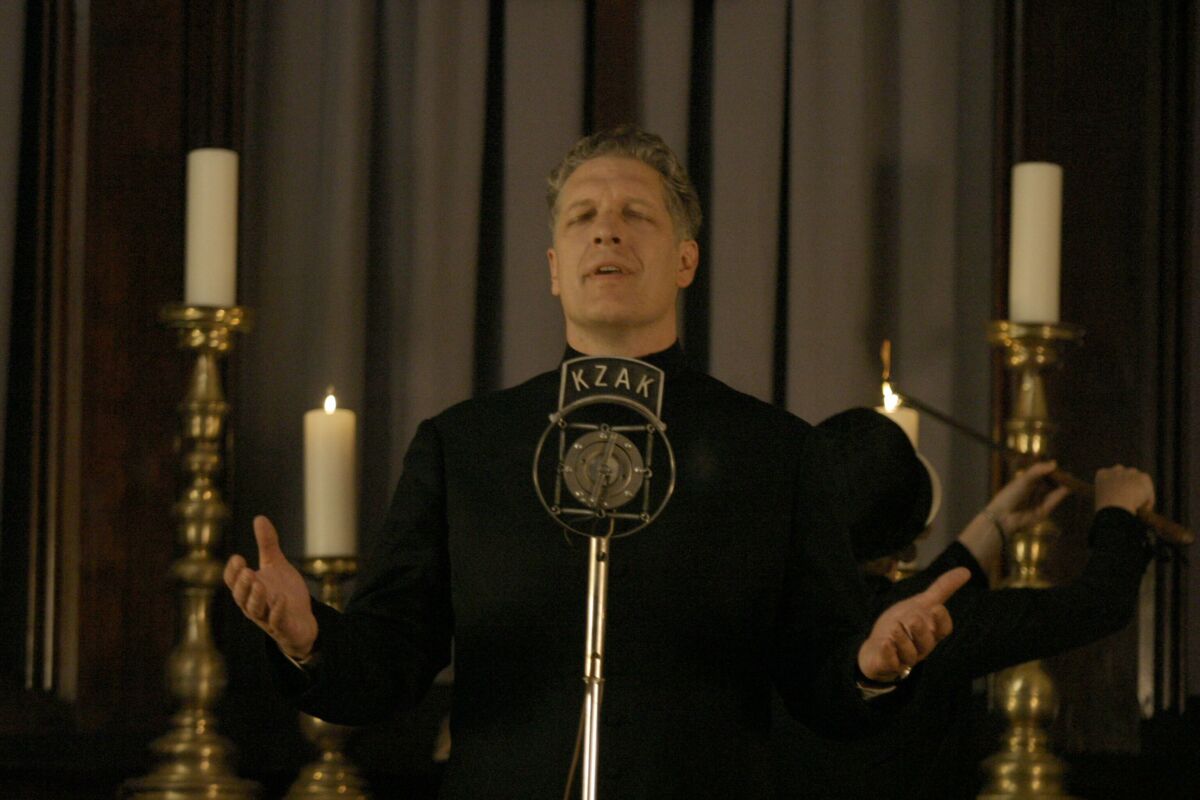 Created and released before its time, better suited for streaming or TiVo due to its glacial pacing, Carnivále was a slow-burning period drama that told the tale of Ben and Brother Justin, two contrasting individuals who are revealed to be the Avatars of Light and Dark, respectively. Over 24 episodes, Brother Justin begins to receive strange visions that inspire him to build a church, only for the church to get burned and push him to suicide. At his lowest ebb, Justin discovers he possesses the power of manipulation, using it to grow a following in his church.

What makes this Clancy Brown villain so fascinating is that he believes he is doing the right thing, that the sacrifices required and the death he has to cause is worth it. This eventually deteriorates Justin’s morals to the point that he viciously rapes his maid and slaughters those who oppose him with a scythe, including his surrogate father. These immoral acts lead to Justin accepting his evil, and he ventures forth with evil intentions for Ben.

The development of the character is fascinating to watch as you see the origin of a villain who thought themselves the hero, a much more multi-dimensional villain. The plans for the series originally included six seasons, with Brother Justin to be a prominent part of the series, and we can only imagine what Brown could have brought to the role. 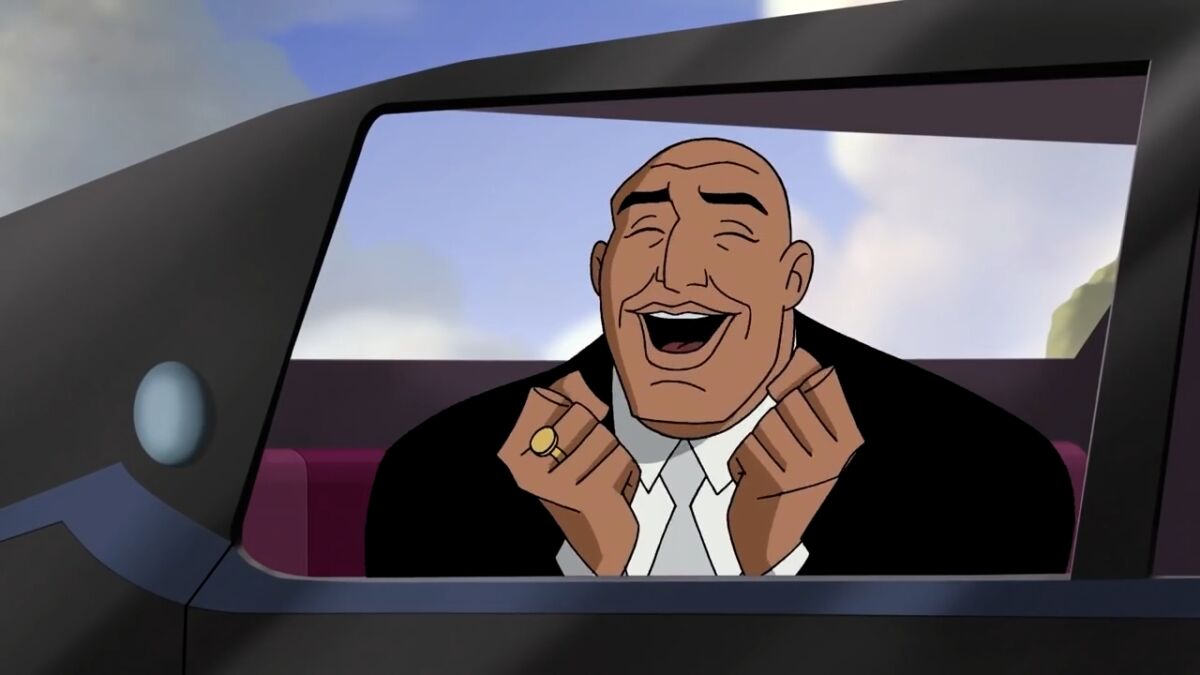 With the astounding success of Batman: The Animated Series, it was unsurprising to see a spin-off brought to fruition, this time focusing on Superman. Considering the definitive portrayal of the villain The Joker by Mark Hamill in the original, it was always going to be interesting to see the choice of actor for Superman’s arch enemy, Lex Luthor. Having impressed in both Gargoyles and Mortal Kombat: Defenders of the Realm in the two years beforehand, Clancy Brown was chosen for a role that he’d embody for the next ten years.

Brown’s casting allowed him to utilise his distinctive and trademark deep voice to invest Luthor with an infuriating arrogance, his dismissive tones to those below him reflecting his heightened sense of importance. The change in tone and attitude when dealing with Superman, an inflection of outrage and ferocity, gives a darker edge to this public figure and offers Brown an opportunity to demonstrate multi-facets to the character. Whereas Gene Hackman and John Shea, the previous main actors who portrayed Luthor, were relatively one-dimensional, Brown demonstrated arrogance, deadpan humour, maniacal anger, desperation, and subtlety, making this performance another excellent addition to the DC Animated Universe. 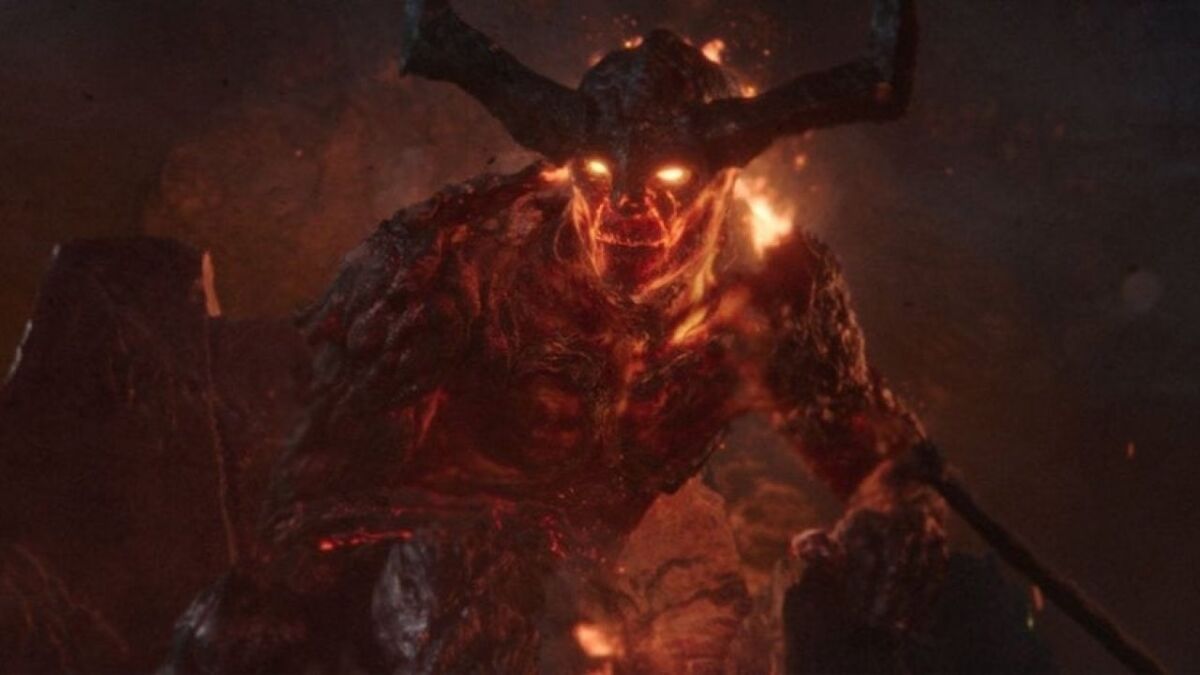 Surtur originated in Marvel Comics in 1963, based on Surtr of Norse mythology, a fire giant who became a main figure during Ragnarok, an apocalyptic event that signalled the deaths of many Norse gods, including Thor. In the comics, he’s depicted as over a thousand feet tall, equal in power to Odin and the wielder of both the Eternal Flame and a gigantic Sword of Doom, the ultimate challenge to not just Thor, but Asgard. While the character was easy to make on screen through CGI and motion-capture, the true challenge was finding someone who could embody such a mythical figure.

That challenge was answered and matched by an actor similarly bigger than life: Brown’s booming voice is perfectly suited to an otherworldly element that can prove to be the endgame against Cate Blanchett’s God of Death Hela. A surprising element is that Surtur actually only appears twice in Thor: Ragnarok: at the beginning to set up his character, and at the end, where Thor’s inability to defeat Hela forces him to sacrifice Asgard, setting Hela and Surtur against one another. It requires a certain type of actor to make an impact within such minimal screen time, and there are few better than Brown, who has made a career of making an impression due to his sheer force of will and personality.

When looking back at these five tremendous performances from Brown, the one thing that becomes apparent is his ability to make his villains impressionable regardless of screen time, often due to giving them an extra dimension or unique trait that stands out more for audiences. Dexter as a series has had several flaws, but during its heyday, it featured some of the best antagonists on television. With performances such as Jimmy Smits and John Lithgow to measure up to, the odds may seem difficult – but if anybody has proven they are up to the challenge, it’s Clancy Brown.

READ NEXT: Ranking Martin Scorsese’s Movies From Worst To Best