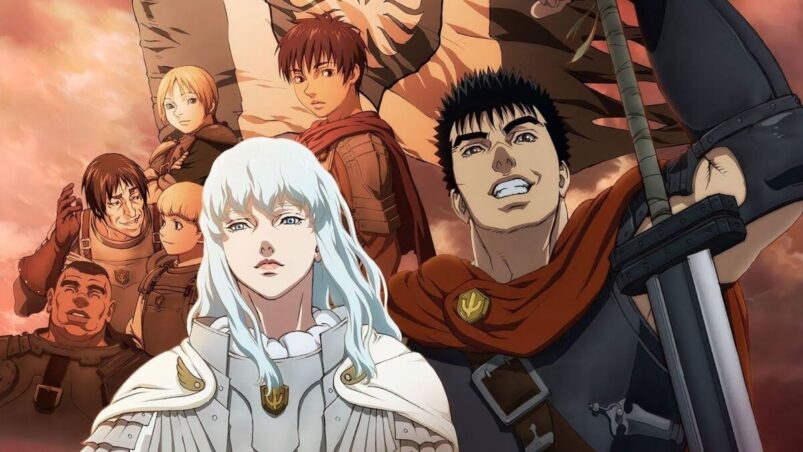 Often regarded as the best anime and manga series ever made, Kentaro Miura’s Berserk holds a special place in the hearts of both old and new members of the industry. Famed for its in-depth character development, and considered a pioneer of the dark fantasy and shōnen genres, the franchise has received much acclaim.

With that said, naturally, a series like Berserk would have a ton of anime adaptations, and fortunately, it does. But the sheer number of seasons and movies makes it quite hard for newcomers who are intrigued by the franchise’s esteem to settle into the community. However, through idealizing Guts, we’ve decided to combat that problem head-on by making a complete Berserk watch order guide.

The Berserk franchise in its entirety includes four anime seasons and three movies, all of which have aired over the course of decades. Depending on the order you watch it in, some parts may or may not be canon to you. But before we get into that, here’s the complete Berserk watch order:

As you can see, the original Berserk anime aired in 1997, and after that, numerous adaptations entered the franchise. The 2016 and 2017 adaptations serve as direct sequels to the original anime, while the Golden Age Arc movies all serve as remakes of the original 90s adaptation. On the other hand, the Memorial Edition is a recollection of the movies that have been rearranged into the format of a tv series with episodes.

Should I Watch The Berserk Movies?

The Berserk: The Golden Age Arc films cover the Golden Age Arc of the manga, a plot point that is already present in the 1997 anime. While the movies certainly do have better animation, more action sequences, and pretty much a more natural way of presenting things, the original Berserk anime does a better job of world-building.

All in all,  we’d suggest watching the 1997 adaptation first and then moving towards the 2016 and 2017 sequels which progress the story further. Afterwards, if you have the time, you should definitely give the Memorial Edition a try as it’s basically a remaster of the movies but it still helps you see things from a fresh new perspective. As for the Golden Age Arc movies, those are a hard pass unless you become a die-hard fan of the series partway.

Where Can I Watch Berserk Online?

Since the recent revolutionization of media and copyright, many shows have had their fair share of troubles with licensing, and the 1997 Berserk anime is no exception. But thankfully, from December 1, 2022, you’ll be able to stream the season on Netflix.

As for the Golden Age Arc movies and the 2016 and 2017 sequel adaptations, they are all available to watch on Netflix as well. However, if you’re searching for an alternative, Amazon Prime has the sequel seasons, while with a Crunchyroll subscription you’ll have access to the Memorial Edition of the Berserk movies.