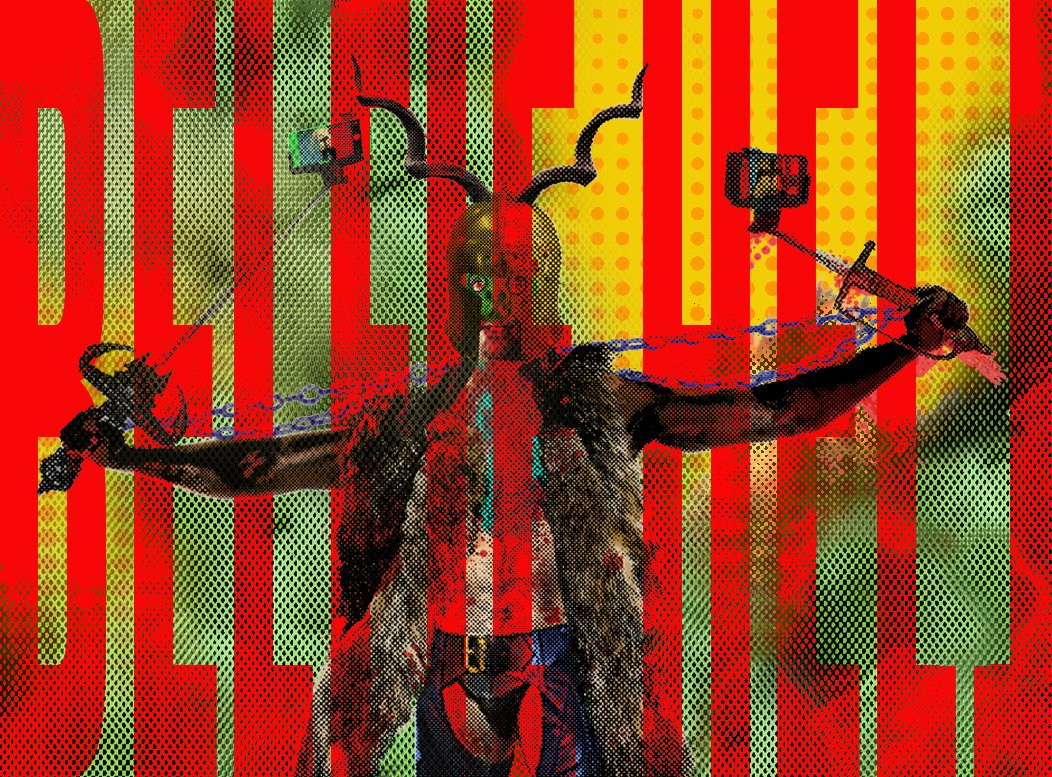 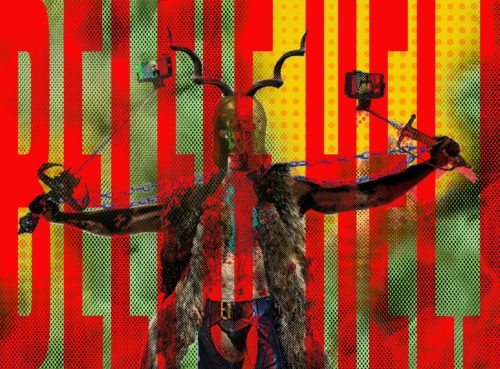 “Belfie Hell is anti-roman … anti-novel … anti-anti-novel. A collection of pieces in which our protagonist eats a piece of cake. In which a horrible sickness … an allotted dryness affects her entire muscular system. The wax hardens in her ears. It was written over a period of years … the day following today. I awoke wrong … incorrect … nightmarish … scared … drained from a blessing … hounded by pig cops … held in riots not anticipated.”

Where does one begin with a book like Belfie Hell?

For those unaware, “belfie” is not a word made up by Christmass nor the name of a place or character in the book. “Belfie” is a portmanteau of “butt” and “selfie” and it’s a slang term for taking a picture of your own ass. This is an actual slang term made popular by Instagram. Welcome to the 21st century, ladies and gentlemen.

Given the title and the cover, which, among other things, features a giant creature wielding two selfie sticks with sword handles, it’s not surprising that parody of mass culture is a fixation in the book. Even the design of the book resembles a pulp mass market paperback. A humorous note at the beginning states the font of the book was picked “because it properly looks like shit without trying to hard.”

Belfie Hell is divided into many sections/chapters, each one a single paragraph and titled that seem to obey their own individual rules. Despite that, there are many reoccurring themes and characters that emerge between them. Several of the scenes/vignettes take place in New Orleans and the Superdome comes up several times towards the beginning. Celebrities appear often, Mia Goth and Shia LaBeouf especially, as do various rappers. Many of the scenes involve confrontations with “pig cops,” mostly as antagonists. All of them give a sense that a great disaster has happened or is currently happening and are incredibly chaotic.

Christmass’s prose style in Belfie Hell is like a mixture of James Ellroy’s in White Jazz and Louis-Ferdinand Celine’s in Death on the Installment Plan. The sentences are very short, sometimes a single word, giving it a staccato rhythm. Christmass often uses ellipsis in the same way Celine did, which is to indicate disjointed ideas brought together rather than pauses. It fits well with the chaotic scenes conveyed throughout the book, making it feel like a distorted action story.

There are many moments of strange and dark humor in the story as well. As mentioned before, police are always referred to as “pig cops.” One recurring character is called “the underage guy that James Franco fucked” and he’s always referred to as that. In one section, the narrator recalls Biz Markie stealing his wallet and another talks about Ice Cube dying from cancer.

There are a couple self-referential sections in the book as well. For example, one entitled “Epilogue,” though it happens towards the beginning, refers to Belfie Hell as an anti-anti-novel. Another section called “The Novel as Synthetic Telepathy” is completely different from most of the rest, being a non-fictional mediation on the possibilities of the novel in modern times. It’s a fascinating short essay by itself and it also acts as a “key” to the chaos of the rest of the book. The mind of a person in contemporary times is receiving so much information that relaying it to themselves in their inner-voice through conventional, narrative-minded language becomes impossible. Belfie Hell is a reflection of that inner voice.

Verdict
Belfie Hell is an odd, intense, and unique experience. Many will find it incredibly frustrating and it's certainly not for everyone. However, it manages to be both very experimental and yet very entertaining at the same time. Several of the scenes in the book are incredibly engaging, it parodies pop culture in a way that's humorous but never pretentious, and has insightful looks into the possibilities of language. If you're up for a challenging read, I highly recommend this.
8
Cultured Vultures is a pop culture website established in 2013 covering all things gaming, movies, and more. We eat your words.
All The News On Your Favourite Games