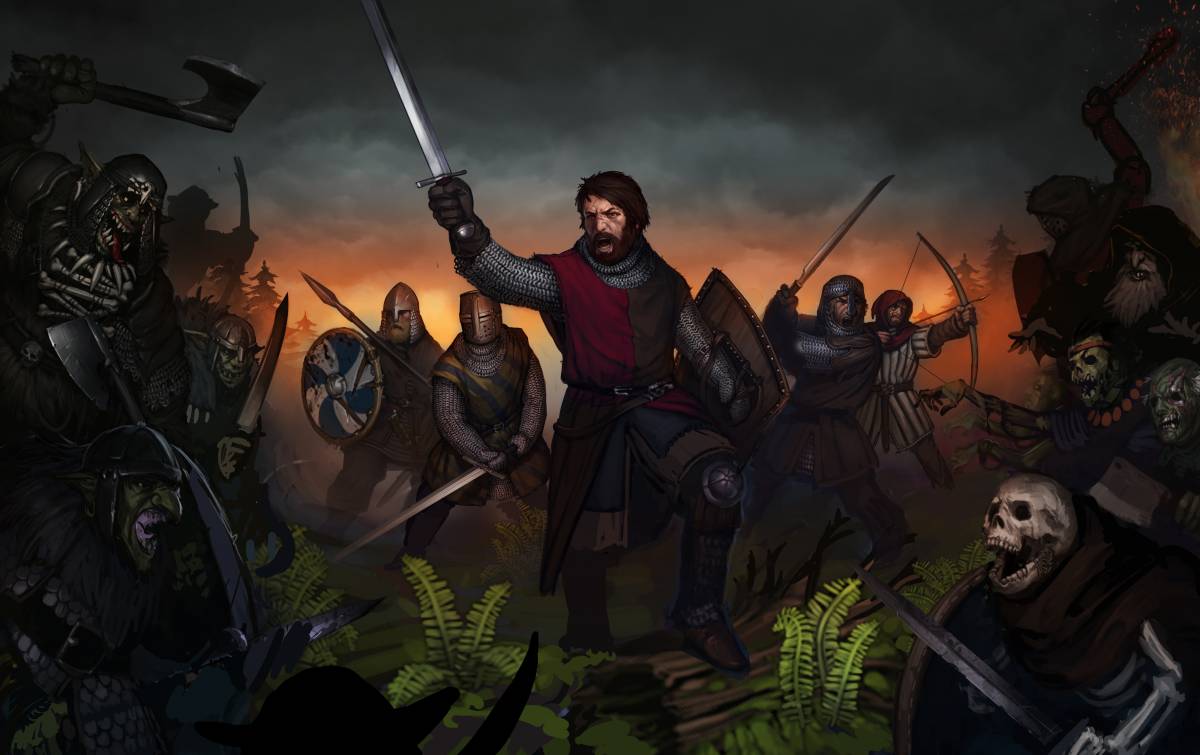 Roffgir the Wild smashed his maul into the face of a hostile orc. I could not help but to grin, noticing that the swing had so much impetus to it that it completely eviscerated the Greenskin’s helmet, as well as the face it was supposed to protect. I can imagine Roffgir would be pleased as well. Or at least he would be, were it not for the stray crossbow bolt which pierced his chainmail and embedded itself in his back, penetrating his lung. Roffgir perished on the field of battle, and even the victory achieved did naught to stamp out the bitterness of his loss.

Battle Brothers is a turn-based strategy game revolving around managing a hearty company of hired muscle in a medieval, low-fantasy setting. You are dropped into a randomly generated world consisting of multiple biomes, plenty of villages, and a few noble houses squabbling between each other for control of the territory. Your task is to restore the glory of your band of brothers, make a whopping amount of cash through completing constantly more challenging quests, before marching your troops against an invasion of the undead, a horde of orcs, or for the sake of supremacy of your favourite noble house.

Bandits roam the countryside, but often they are the least of your worries – massive orcs with vicious axes, crafty goblins with poisonous weaponry and undead which never yield, never tire and can rise up after they’re seemingly squashed, all seem to be lurking around roads, waiting for the correct time to strike.

Naturally, you are not expected to take them on with bravery and fisticuffs alone. To your disposal, for the right price and in the right place, there are plenty of tools of death which you can freely hand out to your merry men. Weaponsmiths provide axes, swords, spears and warhammers which can be wielded with a single hand and supplemented with a shield, whilst more offensive leaders could outfit their troops with two-handed mauls, poleaxes and greatswords. To prevent your favourites from perishing, armour is also at your disposal at your friendly neighbourhood armorsmith, ranging from torn up rags which equate to suicidal tendencies, and coats of scale which will render even the mightiest sword a feather.

Not all villages have a resident smith, however. Whilst all have a market with simple goods such as provisions, medicine and some lower-tier weapons and armour, you can only expect larger cities or mining towns to provide superior supplies. Likewise, hamlets located in the swamps might offer more medicine at a cheaper price, whilst those located in the deep woods provide superior bows and crossbows.

The key to the game is of course your squad of mercenaries. You can have twelve on the battlefield and the same number in reserve, ready to take up the arms of those that have fallen. The soldiers available will at first be common folk, beggars or petty thieves desperately trying to escape impoverishment. The number of willing volunteers depends on your fame, gained through completing tasks, whilst the selection depends on the nature of the town. A citadel owned by a noble house might offer some skilled albeit expensive professional mercenaries. A large village which produces fine arts might have scholars and historians to offer. By going to a monastic village, you can swell your ranks with monks.

Each of the lovely brutes under your command is defined by his statistics, which in turn are somewhat randomised as well as being affected by any applicable traits and backgrounds. An ex-jester usually has high initiative, allowing him to act before others. Perhaps you are glad to have a well-armed deserter in your party, but his low resolve means that he won’t stick around for too long if his pals start falling. A swordmaster can weave around his opponents, slashing and stabbing, but years of training could mean that soon he will become too frail to keep fighting. Although this gives the mercenaries extremely well-developed personality – if you come equipped with adequate imagination – the inability to determine how useful a character will be before purchasing his services becomes extremely bothersome, especially early in the game when there isn’t much gold to spare. It’s reasonably annoying to spend a few hundred gold coins on a bowyer who turns out to suffer from poor eyesight.

Perhaps the most important feature of a character is their fatigue. Sets of armour and weaponry takes away from the mercenary’s stamina, whilst the fatigue cost for attacking and movement remains the same. It thus becomes extremely important to weigh the pros and cons of outfitting your soldiers with the heaviest of armours. A fresh addition to the roster can be given plate panties, but will likely exhaust themselves after a few steps. Do you really need that shield, or is it more important to grip the weapon with both hands and hit harder, whilst preserving the invaluable resource that is energy?

As your rabble endures battles and collects heads, they earn levels and perks. A particularly brave character can be promoted to a sergeant, allowing them to exert confidence into nearby camaraderie. If you enjoy watching your wildling swing a badass battleaxe, with enough experience you can specialise him in two-handed weaponry, reducing the fatigue cost of his attacks. Tanks would be interested in acquiring perks which reduce the fatigue penalty of armour, allowing for more consecutive ability uses.

Experience masses, yet wounds do as well. An attack damaging enough can inflict a temporary injury which requires time and medicine to heal. Occasionally, a soldier can be knocked unconscious instead of killed, but will be permanently crippled; it could be a minor disfigurement such as a missing finger, or a character-breaking injury such as brain damage which leaves the character slow and dull, if a little more brave.

After each fight the loot is collected, injuries assessed and supplies distributed to bring back the company to fighting strength. A successful company requires a constant stream of four main resources: medicine for healing the troops, ammunition to fill up the quivers and javelin pouches, tools with which to repair damaged armour and food; a grumbling stomach is a grumbling mercenary is an unmotivated mercenary. The more troops you have the more provisions are required, with higher-tier equipment requiring more tools and time to fix up.

Verdict
Battle Brothers is a phenomenal indie game, and despite some minor grindy tids and tads, as well as potentially frustrating randomness, it’s a platform for vast quantities of self-made stories, both cheerful and devastating. Those that revel in the brutal, merciless genre will find a fantastic fantasy setting to devote time to, smashing and slashing across ne’er-do-wells, wild Greenskins and chaotic undead.
9
Cultured Vultures is a pop culture website established in 2013 covering all things gaming, movies, and more. We eat your words.
All The News On The Biggest Games