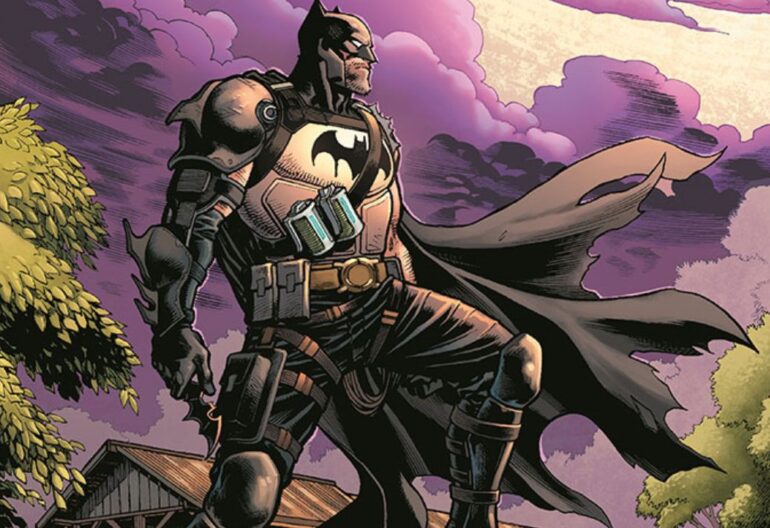 It’s been a long time coming since we first heard about it, but today (April 20th) marks the launch of the Batman/Fortnite: Zero Point crossover comic series, and we have the first trailer to prove it.

The trailer goes over all of the pages we’ve already seen in the lead up to the first issue’s release, but it also gives us our best look yet at the Armoured Batman skin that will be a free reward for collecting all six issues and redeeming all the codes within.

As you can see, it’s an intentional parallel to the first time Batman was in Fortnite all those years ago, when Gotham City was a POI and there were even Batman weapons in the game. It doesn’t seem like there will be anything extra in-game this time out, but it’s still a huge crossover.

Here’s what the comic series is about:

“As Batman/Fortnite: Zero Point #1 starts, a mysterious crack appears in the Gotham City sky, threatening reality itself. Batman—along with some other familiar DC faces—is pulled into it, with the Dark Knight waking up in the unfamiliar world of Fortnite with no memory and no choice other than to fight his way out.”

Across the six issues, Batman will encounter many familiar names from his own universe, as well as the weirdos from within Fortnite as he attempts to escape the Loop and get off the island. Batman/Fortnite: Zero Point will also explore all-new things in Fortnite lore, so it’s worth checking out for anyone who’s trying to unfurl Fortnite’s bonkers narrative.

Batman/Fortnite: Zero Point Price & Where To Buy Them

Each issue of Batman/Fortnite: Zero Point will set you back $4.99 with rarer versions costing more, though all versions will give you codes. Those who subscribe to DC Universe Infinite in the US will also be able to get all the issues and codes for free, but not if they’re still in their trial period.

The series will be available to buy physically in North America, Germany, Italy, Mexico, Brazil, Spain and the Czech Republic. There will also be limited stock in Asia, the Middle East, Africa, Europe, South America and Latin America, but you may have to check with your retailer.