This is a film which just oozes cool.

Edgar Wright has always been a fan of the stylistic, and it’s cranked to eleven with his latest cinematic outing. Following the titular Baby (Ansel Elgort), we’re given a glimpse into the world of a driver in way over his head; a getaway driver, to be exact, working under the domineering, intimidating thumb of Kevin Spacey’s ‘Doc’.

It’s a pretty by-the-numbers story that has its fair share of turns, but that’s totally fine: the story acts purely as a vehicle (eyoo) for some of the best set-pieces I’ve seen all year. Or for a few years, honestly. From the opening scene of a bank heist to the subsequent adrenaline-fuelled chases that litter the film’s two-hour runtime, there’s little room for levity.

Well, I’d say that, were it not for the fact that comedy is generously sprinkled in amongst deathly action beats. Thanks to the film’s superb cast – Jamie Foxx and Jon Hamm, to name a couple – there’s rarely a wide berth between the jokes. This is until the third act of the piece, however, when things become darker and more serious in their tone. Even then, it never feels melodramatic; the tonal shifts always have a way of being precisely what they intend to.

Oh, and then there’s the little detail of how incredible the film’s soundtrack is; that is, how amazingly it’s integrated into Baby Driver‘s action. Beyond what Guardians of the Galaxy did for modern films incorporating popular songs, Edgar Wright takes things to a whole other level. Much of the explosive gun fighting and screeching tyres are synced perfectly to the backing tracks – it’s essentially like watching a lengthy music video, except think more Pulp Fiction than Suicide Squad. I don’t just mean that songs fit the vibe of a scene. I mean that as a vehicle explodes, it’s timed perfectly with the ending to The Champs’ ‘Tequila’. This isn’t the first time Wright has done this in his films – think Shaun of the Dead and beating up pub-owner John with pool cues to ‘Don’t Stop Me Now’ – but it’s certainly been perfected here. I can’t say that I’ve ever seen a film where the soundtrack is so intrinsically linked to the drama.

The storytelling in Baby Driver is as seamless as the accompanying tunes, in that it’s not overbearing or obnoxious. Baby’s backstory is gradually unwound throughout the movie, in a visual way which doesn’t assume the audience are idiots – something which is always appreciated by modern cinemagoers. For as simplistic as the plot is, it just works. There’s enough tension and stakes that mean things always feel like they could snap at any moment, and this is no doubt due to the colourful characters that punctuate the movie. Jamie Foxx’s dangerously unpredictable ‘Bats’ comes to mind as a standout, but, as mentioned, many key players make the film what it is. 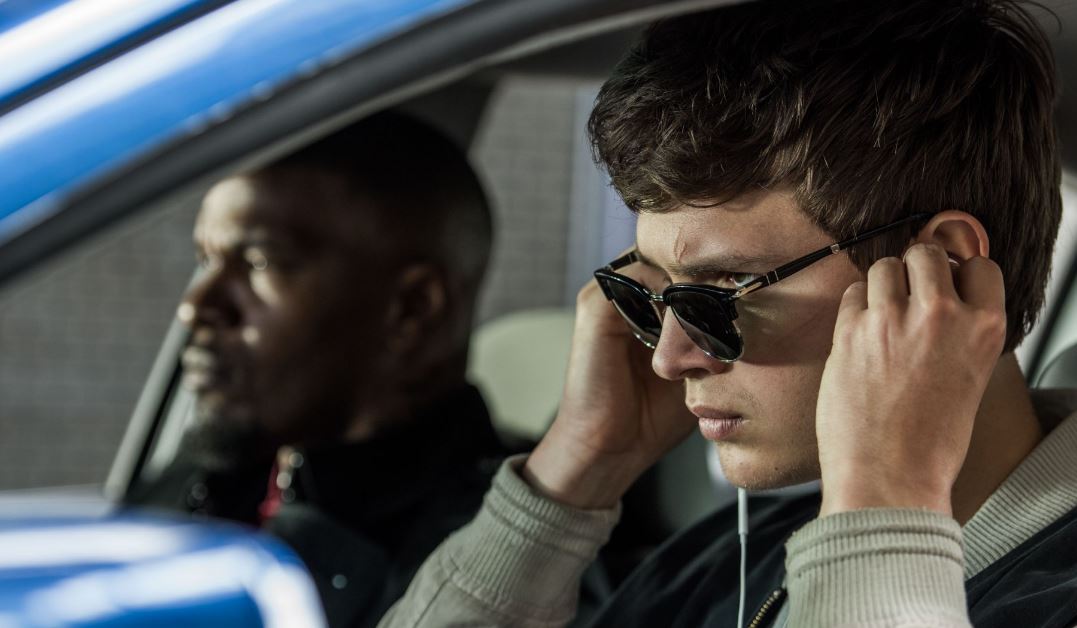 That’s not to say everybody is perfect, mind. I’ve never been an avid follower of Ansel Elgort, so this was my first time properly exposed to him. Unfortunately, there’s a handful of cheesy scenes between he and the love interest that, due to some stilted delivery, feel awkward at best. There’s also a handful of fairly expendable characters that Spacey’s ‘Doc’ hires who feel little more than caricatures, but this is expected in a film dealing with the criminal underworld.

All in all, I was pretty blown away with Baby Driver, and would rate it as one of the best films of this year – easily. In terms of the delivery, it’s unlike anything you would’ve seen, and the plot is serviceable enough to remain gripping.

As a little side note: some people have said that the opening scene is the best in the film. While I’d say it got me into the swing of things nicely, I’d have to disagree; the best is yet to come. So if you’re not fully hooked within the first five minutes, give this excellent film just a little longer to win you over. You won’t regret it.

Verdict
In a word: awesome. Not only is it distinctly unique, Baby Driver also delivers much more than just a musical gimmick. See this movie yesterday.
8.5
Cultured Vultures is a pop culture website established in 2013 covering all things gaming, movies, and more. We eat your words.
All The News On The Biggest Games