Baba Is You: A 21st Century Rubik’s Cube

Baba Is You is beautifully simple, fiendishly complicated, and an awful lot of fun. 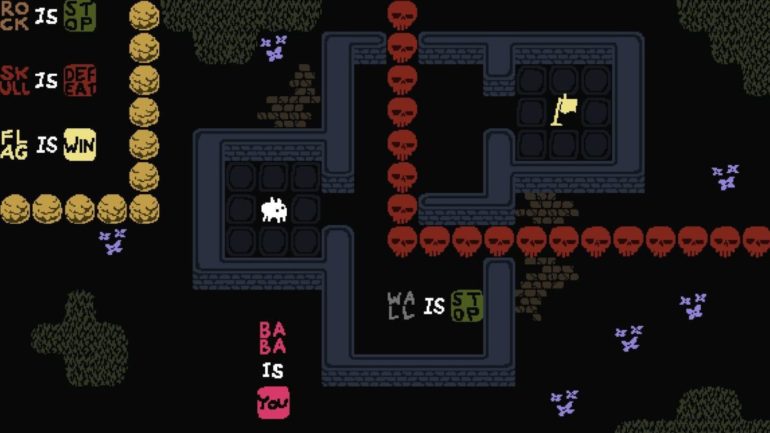 Straight off the bat, Baba Is You unapologetically demonstrates the old principle that some things aren’t for everyone. If your favourite sorts of games involve 360° noscopes, or hammering buttons through a quicktime event, or the endless rush of marshaling all the resources you can, and you can’t stand anything much slower than that, then leave Baba be. If, on the other hand, you enjoy any sort of puzzle games – even up to and including the venerable Tetris – then Baba is definitely for you.

It’s also an example of the less well-defined genre of games which let you freely muck about with the game world. The most popular example of these is obviously Minecraft, but that only lets you change the world physically, rather than screw with the underlying rules of the reality you’re playing in. Probably the best point of reference isn’t a specific game, but rather pressing tilde to get into the console and start playing with the values, so that you can suddenly jump forty feet in the air from a standing start, or walk through walls.

When you start playing Baba Is You, you will be presented onscreen with the almost-a-sentence ‘Baba is you’, each word a single block onscreen. This is immediately intuitive – you are Baba, you control Baba (a cuddly-looking little beast, who so far me and the boys have been unable to positively identify as a sheep or a rabbit). Now, if you have Baba move any of those words out of place and break up the statement, Baba will no longer be you. You will lose all control over Baba, and the low-key, trancelike background music suddenly cuts out and gives way to a terrifying silence.

From that basic statement, and how you interact with it, comes the rest of the game’s mechanics. ‘Door is shut’, ‘key is open’, those are simple enough to understand. You push the key into the door – provided, of course, you’ve also got ‘key is push’ in action – and the key opens the door and you’re away. But this is the classic model of deceptive simplicity. Gradually more words turn up on screen, you need to get more creative with them, and suddenly – just to stick with the elements we’ve already mentioned – you’re turning yourself into a key and slamming into a door to open it.

This formula doesn’t simply encourage constant experimentation, it demands it. By the time you’re done you’ll have turned yourself into every other object onscreen, pushed rivers of lava around like chess pieces, and created an endless stream of Babas spiralling out of the night sky – all this, to restate, through the simple block-puzzle of rearranging the sentences that make up the rules of the level.

But experimentation is perhaps the wrong word, conjuring up as it does images of very clever, very dull men in white coats. What you’re actually doing is playing – playing around with a steadily increasing number of different moving parts, like a Rubik’s cube stretched out into physically implausible dimensions – which is, after all, what games are for. ‘Playing’ also has its connotations, of childhood and simplicity, but far more than those it suggests fun. And, as Reggie Fils-Aime once said of gaming, “If it’s not fun, why bother?”

The pared-down visuals – pixelly enough to be called ‘retro’ – subtract nothing. It’s simple and clear, there’s no confusion as to what’s what, other than the confusion of what the hell you’ve got to do to win. It’s an old cliché to compare games to Dark Souls, but this is one of the rare occasions when it’s a valid reference to make, not because you’ll find yourself dying left and right but because when you finally succeed – and a couple levels in it will be a case of ‘finally’, after many increasingly wild attempts – you feel like a king.

But contra Dark Souls, racking up the attempts doesn’t become anywhere near so blood-pumpingly frustrating. There is no ‘how’d they hit me there, this is bullshit’ – in such a rigidly logic-driven game, it is immediately clear how you’ve gone wrong and why. And mercifully, you can step back in time at any moment, a vital feature given that otherwise it would be incredibly easy to find yourself marooned in unwinnable situations.

(Oops! I’ve filled the screen with copies of myself! – Oops! I’ve turned the floor into lava! – Oops! The skulls I’m having march back and forth have melted the phrase ‘Baba is you’ and now I can’t control anything!)

As the levels wear on, the inherent freedom of the whole concept gets hemmed in a bit as the levels place you in tighter quarters, with a greater range of other words and objects all around, but there’s still plenty of room to play about with it. Knocking ‘Baba’ out of ‘Baba is you’ and replacing it with ‘wall’ may not beat the level, but it can still raise a smile to see the walls spring to life and start hopping around to your commands.

Baba Is You couldn’t really be said to have a narrative (at least, not beyond Baba being you) like your AAA titles, where gravelly-voiced men save America by shooting everyone else. But really, it doesn’t need one. Like with its graphics, it harks back to an earlier era of gaming, beyond even an early Mario Bros. player thinking ‘ooh, a walking mushroom, I’d better jump on it’ and landing in the same kind of headspace as a Tetris player, not even having to consciously think ‘ooh, I’d better complete the row’ because it’s obviously the thing to do.

It’s been said before that ‘video games’ is an increasingly wide and unwieldy big-tent category, covering everything from ultra-simplistic mobile games to the latest over-polished Call of Honor: Medal of Guns shoot-’em-up. One end of this that’s clearly sticking its toes out of the tent is your story-driven game, many of which are edging closer to being interactive films. Baba Is You, however, is clearly the opposite – and if I had to apply a single word to it, it would be ‘toy’. Again, there’s the childish connotations, but there’s really no better word for it. It’s something to be played with, it’s something a great many people will enjoy playing with, and as gaming goes that’s high praise indeed.

READ NEXT: The Best 40 Best Indie Games of All-Time