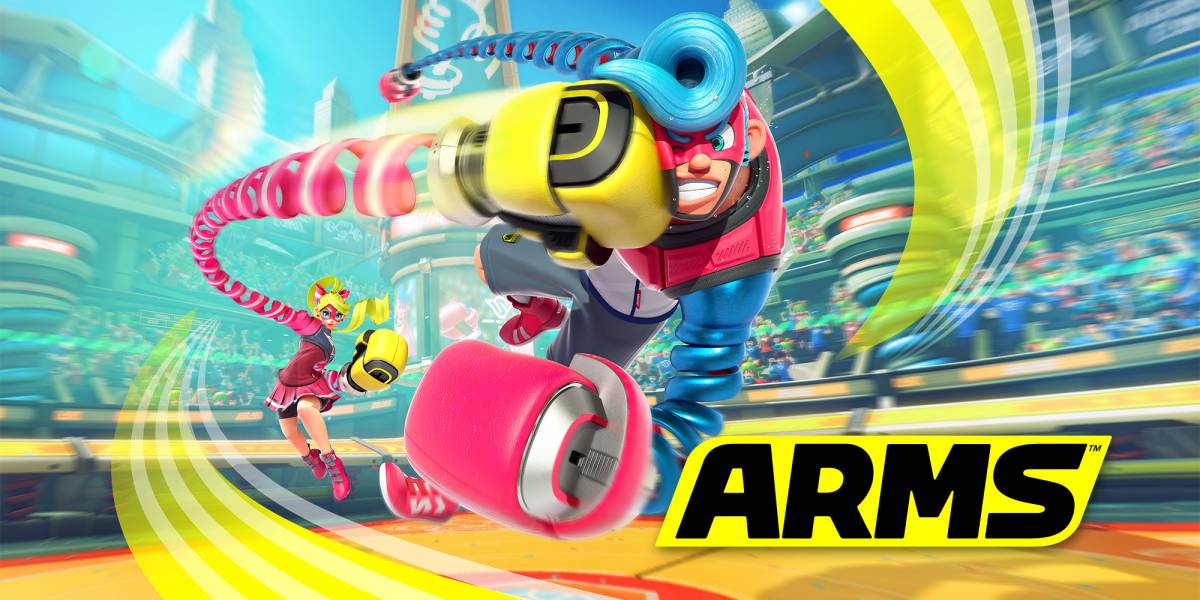 Nintendo has made a brand new fighting game for their Switch. It’s called ARMS.

In order to drum up some interest for the game, Nintendo is giving Switch owners the opportunity to try the game for a bit before its release – the “ARMS Global Testpunch” event allows Switch owners to play ARMS for free against other players online at specific, designated times of day on the weekends before release: May 27, May 28, June 3, and June 4.

ARMS is a 3D arena-based over-the-shoulder fighting game where the player dodges and blocks their opponent’s punches while trying to punch them back. You win a match by reducing your opponent’s health to zero. This sounds normal so far, but the unusual thing is that all of the fighters have stretchy, extendable arms, with which they perform long-distance punches. It’s kind of silly, but it somehow ends up working out into something interesting.

The game gains depth and complexity when you consider that it has ten different playable characters with their own unique abilities, as well as many equippable ARMS that give your punches different effects, allowing for all kinds of strategic combinations to choose from.

ARMS uses the Switch’s motion control capabilities – the idea is that you hold a Joy-Con in each fist, and literally punch in front of you to perform punches. I’ve heard differing opinions about this control scheme from various people online – some people think it works great, while others can’t stand it. I personally couldn’t get the hang of it and I never really felt in control of my character when I used the motion controls. Thankfully the game has options to use a standard control scheme, which I felt worked fine.

So yeah, I tried out the game during one of the Testpunch times. It was fun in an odd way, though mostly it was confusing – I haven’t yet figured out how to play yet, so it felt quite chaotic and overwhelming. I found myself pressing buttons without much strategy most of the time, though there were a few occasions where I actually thought about what I was doing and decided to execute a tricky maneuver on purpose. It’s definitely something that can be practiced and mastered if you have time to yourself to work it out. Unfortunately, as the timeslot for the demo was only an hour long, I didn’t get much of a chance to experiment with the controls and mechanics.

My overall impressions of the demo were positive, even though I didn’t quite get the hang of it. The lobby system worked great and I experienced no lag at all. I had fun with it, and isn’t that all that matters in the end?

Since I haven’t yet properly worked out the gameplay, the most interesting part of the game for me at the moment is the character design. Each fighter is completely unique from one another in their design and personality, and it gives the game a lot of character. I love how wacky and wild the character design for this game is.

To name a few examples, we have:

– The energetic and cheerful Ribbon Girl, a pop singer whose arms are stretchy ribbons. She can jump multiple times in midair, and (from what I’ve played) she’s an overall easy fighter to use.

– The stoic Ninjara who’s studying the way of the ninja in Ninja College. He has chains as arms, and he can move swiftly and dodge attacks with precision.

– The “Ramen Bomber” Min Min, a martial arts expert whose arms are made out of ramen noodles. Her arm can also transform into a dragon for extra firepower.

– Mechanica, an engineer girl who actually has normal human arms, yet she fights in an armed mecha suit she built herself.

Strangest of all is Helix, a green goo man with DNA strand arms, who can melt into a puddle and stretch himself all over the place.

These fighters have vastly different playstyles and personalities, and their detailed animations reflect this. It gives the game a lot of charm.

Nintendo’s done a great job with the characters from a visual design standpoint, and the game itself does appear to have a lot of potential for exciting, high-level play. It only remains to be seen if it ends up being successful.

I’m optimistic about it at least. ARMS is set to release on the Switch on June 16, and it’s looking to be quite an interesting and unique game for the system.