We Kidd you not. 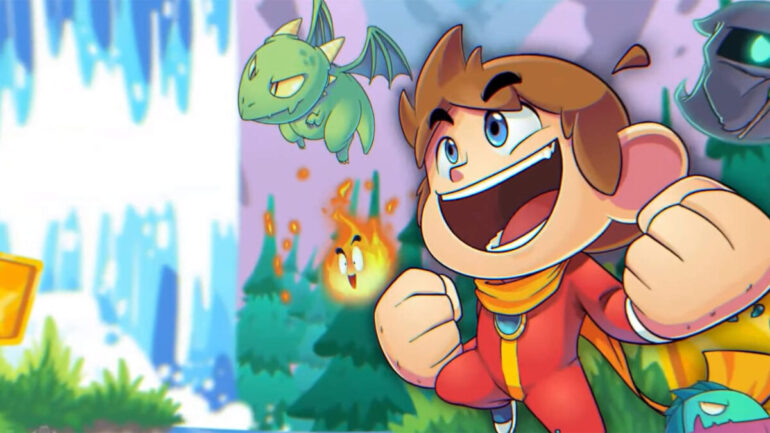 Alex Kidd in Miracle World DX might be an unexpectedly difficult game for some. I’m not the sort of writer who’d compare every difficult game to the likes of Dark Souls, but let me tell you: while it looks cutesy, it really isn’t. If you bought the delightfully named Alex Kidd in Miracle World for your child back in the 80s, fully expecting it to be a fun and light video game experience, you are totally forgiven. What you actually bought was a gateway to pain and suffering.

The original Alex Kidd was one of Sega’s first forays into the home console 2D platformer market, it had all the bright colours and cartoonish characters you’d expect from the genre. And despite the game releasing in the ancient time of 1986, graphically it still looks wonderful. It looks as accessible as Nintendo’s Super Mario Bros. released a year earlier, but it has one main difference.

Right up until the 90s, game design was often inspired by arcade gaming, and that’s where Alex Kidd’s difficulty came from. Arcade games were designed to be difficult, while, most importantly, addictive enough to rinse you of your quarters, and Alex Kidd certainly fell into this bracket. Updates of classic games are certainly in vogue and many developers have gone down the route of recreating a game that ‘feels’ like that old game, and not necessarily an accurate remake of it. Developers Merge Games and Jankenteam didn’t go down this route.

While the graphics, sound and overall design have been made over, Alex Kidd’s trademark difficulty has remained perfectly intact. Alex Kidd features one hit kills, and that’s not really an issue as checkpointing is pretty solid, usually putting you back just before the point you died. However, you only get three lives, after which you’ll be restarting the levels over. There’s also the option of unlimited lives for those who don’t want a punishing challenge, but that almost takes away the point of the game.

Now this is something that takes getting used to. Alex Kidd himself handles much like his 80s counterpart, which isn’t something I ever got used to and, after playing this remake, is something I don’t think I ever will. It’s hard to explain, but Kidd handles unexpectedly, perhaps jumping a little further than expected, or moving slightly quicker than anticipated. Far from being a negative thing, it actually plays into the style of the game and works well.

Alex Kidd in Miracle World isn’t just another 2D platformer though, it has something going for it, something that Mario or Sega’s next mascot, Sonic, didn’t have. Sure, it has the difficulty, but it’s the style of gameplay that is unique to Alex Kidd. It employs a trial and error based gameplay style, and far from being a fast and intense experience, much like other indie 2D platformers, it instead relies on you being slow, careful and making good decisions.

That doesn’t sound exciting, but it’s a surprisingly satisfying gameplay loop, and is especially rewarding when you manage a clear run, as well as being frustrating, yet entertaining when you fail at the same point repeatedly. It seems that Alex Kidd, with its classic 80s gameplay, somehow feels different and fresh.

Gameplay wise, it’s quite simple: Alex leaps unexpectedly far and throughout levels, and is equipped with a punch attack to defeat enemies, as well as break boxes and blocks. Most enemies can be hit too, with some enemies taking more hits than others. There are some undefeatable enemies that will chase you Nemesis style should you be unable to get away from them.

You’ll be collecting bags of cash during your playthroughs, and levels often have various different routes, which means you can’t always get all the money, so the game once again relies on trial and error gameplay. This money can be spent on various bonus items which can make your progress easier, ranging from extra lives or ranged weapons, or the more famous items such as the bubble helicopter and legendary motorbike.

As this is an almost straight remake of the gameplay of Miracle World that’s carried over all of the gameplay features of the original, as far as I can tell. There’s one controversial feature that has also made its return. The rock-paper-scissors ‘mini-game’ is actually a boss battle of sorts, and losing it means you lose a life, potentially pushing you all the way back to the start of the level.

I never thought it was overly fair that a key aspect of the game should be down to mere luck, and the fact that these are end of level boss fights can make it particularly annoying. Luckily, it’s not difficult to predict the boss’s moves after playing the fight a few times, so again it boils down to trial and error.

Despite this minor annoyance, Alex Kidd in Miracle World is considered to be one of the best platform games of the 1980s, as well as one of the best ever made. Very little needed to be done to upgrade the gameplay, so you can enjoy this classic with a whole new coat of paint, hopefully bringing in a whole new fanbase to the Alex Kidd franchise when it releases on June 24th on Xbox, Playstation, Nintendo Switch and PC.