After Blue REVIEW – The Next Stage of the Acid Western 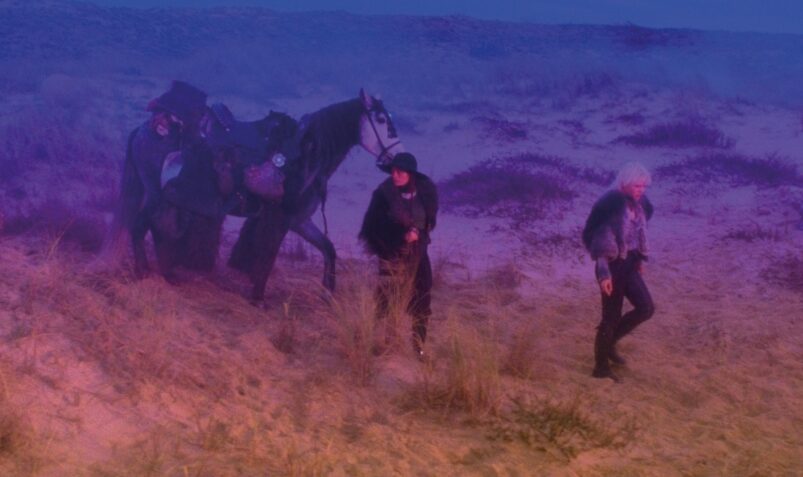 After Blue, the most recent feature from Bertrand Mandico, French experimental filmmaker and co-author of the Incoherence Manifesto, is truly a fever dream of a movie.

It opens with some of the most beautiful science fiction space images you’re likely to ever see as it offers an introduction to its world. A voiceover slips from French into a number of different languages as we learn that after the Earth died, humanity moved to the planet called After Blue, though men weren’t able to survive the planet’s atmosphere. The remaining women formed disparate communities on the planet based on their Earth nationalities, but these communities aren’t closed off from one another or the outside world.

The story begins when Roxy (Paula Luna), “Toxic” to her friends, frees criminal Kate Bush (Agata Buzek), who has been buried up to her head in the sand of the no woman’s land. Kate Bush immediately kills Roxy’s friends, briefly makes out with Roxy, and disappears. When Roxy returns to her community and tells them that she freed the criminal, she and her mother Zora (Elina Löwensohn) are tasked with tracking down and killing Kate Bush.

Despite the names, as far as sci-fi westerns go, this setup isn’t entirely unique and in fact simply places an archetypical western bounty hunting story into a new world. But the story is tertiary to the aesthetic experience of this new world and the ideas that it seeks to explore. The visions of After Blue that Mandico and crew create are astounding. Every frame of the film is doused in at least one color of light, evoking the tinting of early film, the stunningly bright colors of gialli, and the neon hues of more recent films like the John Wick series and the newer work of Nicolas Winding Refn in equal measure.

The creature effects are simultaneously reminiscent of the practical gore of the 1980s and astoundingly original, particularly in the case of the indigenous humanoid “Indiams” of After Blue whose faces are huge openings lined with crystals. The production design manages to fluctuate between the bare minimum needed to make a scene seem otherworldly (adding a few oddly shaped rock formations to a beach) and creating a world that looks as if some of the more horrifying images from Hayao Miyazaki’s films made their way into live action. The costumes are mostly lacking in the coverage department but not at all in the style department, again borrowing freely from things like Mad Max and the iconic black coat and wide brimmed hat of Meiko Kaji in Female Prisoner Scorpion while focusing purely on the visual pleasure of the clothes above any function. And to top it all off, the score by Pierre Desprats elevates the soundscape of the film in almost every moment, whether through shimmery ambience or pulse pounding heavy bass beats.

True to the Incoherence Manifesto, the plot meanders as Roxy and her mother meet different people (and sentient non-people) on their journey, allowing the film to engage in a variety of dialogues on art, justice, ownership, identity and more. These chance meetings also build on the eroticism of Roxy’s first interaction with Kate Bush, with Zora and a powerfully attractive artist Sternberg (Vimala Pons) striking up a relationship and Roxy engaging in what some may feel is too creative for live action sex with an android. Even when the sex isn’t on screen, Sternberg’s entire persona exudes sexuality and desire, both hers for others and what feel like implicit demands (simply in her way of being) that others desire her.

After Blue is narratively a western about a mother and daughter hunting a criminal, but experientially it’s nearly indescribable (though I’ve done my best) as there’s just so much happening at every moment; in terms of visual and sonic art, attempts to elicit horror or arousal, and conceptual discussions on a wide variety of topics. While the initial premise of After Blue may be something we’ve seen many times before (and will undoubtedly see many times again), the trip that the film takes its audience on is wholly unique. 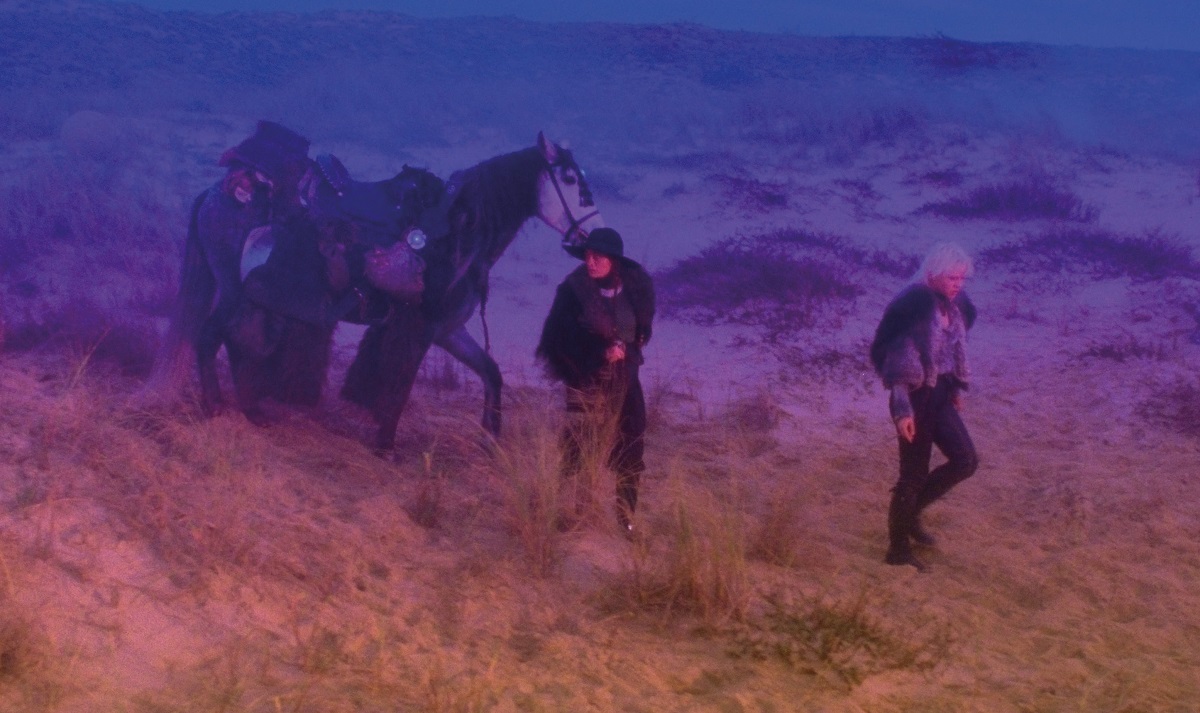 Verdict
After Blue takes its audience on a journey to a world unlike anything we’ve seen before in every aspect.
9
Cultured Vultures is a pop culture website established in 2013 covering all things gaming, movies, and more. We eat your words.
All The News On The Biggest Games