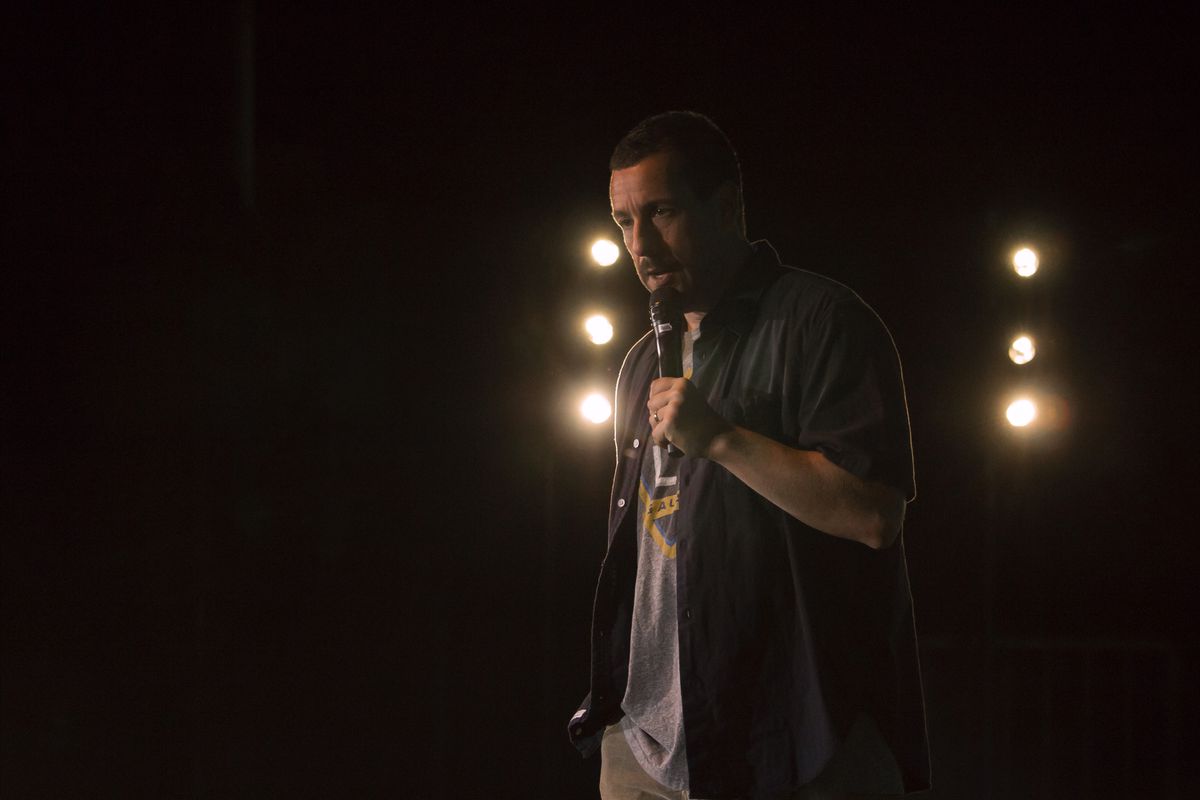 All you really need to know, in a ‘should I watch it or not’ sense, is that you will indeed laugh at Adam Sandler’s latest Netflix offering, 100% Fresh, if you give it a go. What you might not be expecting, particularly if you were a fan of his original Saturday Night Live stuff and his first wave of movies, is a sense of joy, as if you’re seeing an old friend after a long absence. That’s what I got from this Netflix Special, filled with big laughs, but more importantly a surprising amount of heart, which I’m very glad I didn’t see coming because it hit me all the harder for it. To break down a long-winded discussion before it begins, whatever you think of Adam Sandler’s more recent comedy offerings, to me this one feels the most like prime Sandler in forever.

100% Fresh has a unique format, blending takes from various events and locations into one big show, almost like it was a compilation. The mixing and pacing never suffers though and it would all sound like one seamless standup special if you listened to it while doing something else, as so many of us do. For what it adds to the special, I can’t say it does anything remarkable technically, but what it does seem to do is answer questions before the watcher can ask them. Questions like: has Sandler been continuing his standup in smaller venues? Yes. Can he still pull in a massive crowd of fans? Also yes. Do the laughs come if he’s working in a room of a couple dozen people or in a full arena with lighting and smoke-machines? Yes again. There’s even a cliffhanger over one of the locations as he plays it incognito and we never find out whether he revealed himself, but we do see that even without recognition he can draw people in with his relentlessly silly but sincere idiocy, regardless of his name value.

As expected, he doesn’t skimp on his excellently fun music interludes in his act, jumping genres and styles with humorous mini-commentaries on them without ever sacrificing laughs. He hops into a genre, does a quick jig, provides a big laugh – and then he’s on to the next. Each one crashes into the joke suddenly and cleverly, and even if by the end you think you’ve figured out where he’s going the smile on your face is too wide for you to mind. As for subject matter, it’s a whimsical flitting between life’s little foibles that most anybody should be able to relate to – probably way too closely. If you appreciate clever rhymes leading to stupid and hilarious car-crashes, you’ll have tears in your eyes laughing hard through most of the show. Even when he gets a bit fantastical and brings out a guest (you know who it is) it lasts exactly as long as it needs to for maximum laughs. By that point you’ll be happy with the choice to spend the time with him, and then you’ll get to the last couple of songs.

When Sandler approaches the end of 100% Fresh, the whole thing comes together even better than I could’ve expected. At about an hour in you’ll be sitting there happily content that Sandler can still deliver, but then things go into overdrive as he tugs on your heartstrings, and I daresay brings tears to the eyes as he sings a pair of songs that dig right into himself, his friends, his family and will make any longtime fan experience some big feelings that will elevate this special from a ‘return to form’ to a true homecoming. I don’t want to spoil them for you on the chance they get to you as they got to me, which I thoroughly appreciated and hope you do too. It reminded me of the ending to a Tim Minchin show, where he displayed his musical talent to it’s fullest for maximum effect.

Above all else, the jokes land like they did on his albums, the songs charm and turn as they did on Saturday Night Live, there’s quotable stuff here like in his movies you can throw between friends that’ll make you happy whenever you hear them down the line, and the enjoyment is constant, from when the show kicks off until the credits. All in all ‘The Sandman’, as he facetiously and ironically refers to himself, remade a fan out of me when I didn’t see it coming, and that makes it even better because for a while there we worried he didn’t know what he was doing. You’ll get it.

We totally called Netflix bringing back standup. Check out our reviews of some of their other original content here.