Home
Gaming
A Year Of Rain: 5 Tips To Get You Started
Gaming Tips & Guides
·3 min read

A Year Of Rain: 5 Tips To Get You Started

New to A Year of Rain? Here's everything you need. 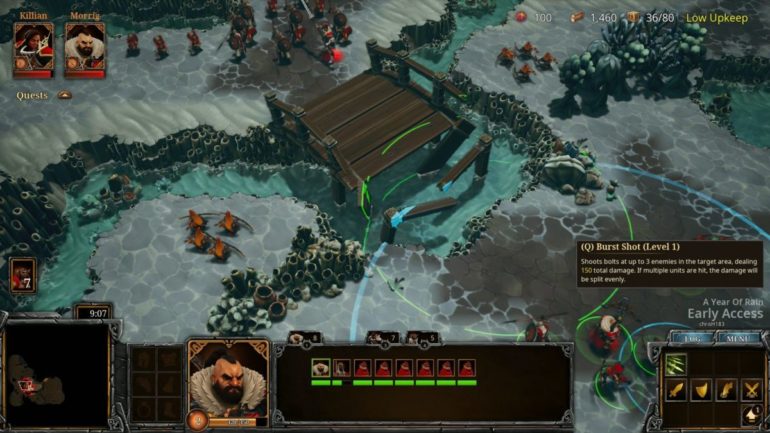 Daedalic Entertainment’s co-op RTS A Year of Rain is available now in Steam’s Early Access, and while it shares many similarities with spiritual predecessor Warcraft 3, the main difference is that you’ll be paired up with a buddy at all times. This means that there’s a lot more than just following a build order of your own: you now also have to watch each other’s backs and resources.

The other extra ingredient Daedalic adds to the recipe is a selection of three roles: Tank, DPS or Support, enabling you to pair up with a partner in a specialised way. Pick DPS, for example, and you’ll be granted access to a skill that enhances your damage output. Each comes with different bonuses for the respective armies and the overall team, allowing for a multitude of strategic combinations and synergies.

If you are waiting on Warcraft 3: Remastered and you have an RTS itch to scratch, A Year Of Rain may help improve your micro skills.

With this in mind, here are some tips to get off to a running start.

1. Play the campaign (and the tutorial)
If you’re new to RTS games, do yourself a favour and get to grips with the basics. You’ll be introduced to a hero and their abilities pretty early on, but some more powerful army units also possess abilities that can be used to support your team, like the Djinn’s damage reduction shield. Pressing Tab while selecting a bunch of different units will cycle through each type of unit in turn if you need an ability in a pinch.

You will also need to learn what to do to amass an army quickly, because your enemies won’t wait for you to get ready. Luckily, in skirmishes the game provides you with a couple of ready-made build orders to follow if you are stuck. The game seems to favour quick and low-cost units to build at the start of the match to then help level up your hero. They only get their abilities once they have levelled up, so finding neutral mobs in the wild and putting them down is key to getting a head start.

2. Pair your heroes well
Each faction has a selection of heroes to choose from. Take into consideration what role you’re playing, and pick accordingly – there’s no point trying to be a tank if your hero is more suited to ranged DPS.

If you’re getting started, consider playing as House Rupah’s Ranger (as DPS) or Paladin (as Tank). Their abilities are plainly focused around protection or ranged offence and pair up with each other well in a team of two. The Paladin can heal units and tank damage by redirecting it to her, leaving the Ranger clear to snipe away units causing trouble to the rest of your army. Combo these units with a horde of Spearmen and Rangers for a solid early attacking force.

3. Keybindings are key
Actions are bound to keys, and memorising these will improve your APM (actions per minute, for the uninitiated). This is useful in battles where you need to cast spells as quickly as possible, or if you need to quickly order up some fresh buildings without having to trudge your way through command menus.

With this, you won’t need to look away from your army while putting in orders for a fresh batch of units. Newer RTS players may find it difficult to keep track of their armies, but keybinding them to a number will make that a lot easier. Ctrl + a number on the keyboard while selecting a building or a group of units will bind them to that key. If you need them in a pinch, select them and do what you wish.

4. Counter your opponents
Building your army is half the battle, as you also need to know what everyone else is doing. Send out a lone worker at the start of a match to see what builds your opponents are cooking up, and whether they are trying to rush out an early attacking force. If you’re lucky, you can occupy one of the extended sight areas (marked by an eyeball on the map) to gain more intel from the battlefield.

5. Bring a friend and get on Discord
This game is best played with someone you know. You can play solo with a CPU and ping locations for your partner to go to, but nothing can beat a co-ordinated attack by you and a friend.

Being able to track enemies, build armies that adequately counter your opponents and share intel over voice comms is so much easier than trying to do the same over text, and while you could rely on the aid of the CPU or another random player to do the same thing, you won’t get the same amount of teamwork. Even if you do find yourself with a random player, voice chat is almost imperative.