Very much Dracarys, this episode. 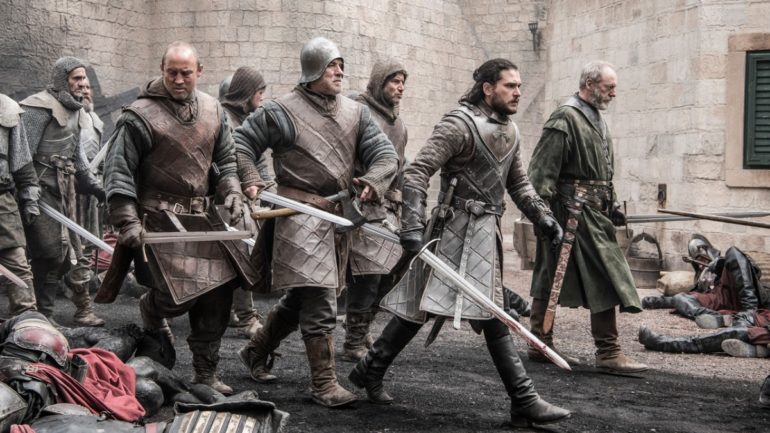 If it’s fire and blood you wanted, the penultimate episode of Game of Thrones, ‘The Bells’, certainly didn’t disappoint. If it was eighty minutes of perfect television to make every viewer happy you wanted instead, too bad.

Though it was mostly just the continued application of this old meme after an extreme heel turn, the fifth episode of Game of Thrones Season 8 still had some outstanding moments away from and including all that. Here are just eight of those.

I wanted Jaime to stay with Brienne. I wanted him to kill Cersei. So IMAGINE MY SURPRISE when this moment made me full on sob. #GameofThrones pic.twitter.com/F42ZG20Z3e

Yes, so Cersei dying this way and not of the million other ways we had dreamed was certainly a disappointment, but it’s not really a mercy for her. She’s just watched everything around her be destroyed because she was too stubborn to back down, and — believe it or not — getting crushed by rocks while begging for your unborn baby to be safe is not exactly a pleasant way to go out. Bit odd that the episode tried to humanise her so heavily, though.

Again, a bit of a letdown that the Golden Company we’ve heard about for so long could go out so feebly, but Game of Thrones has never really given much of a damn about that. Drogon decimated the army, leading their pompous general, Harry Strickland, to look like a panicked child as Danerys’ forces charged before he was cut down.

This right here folks, is when Jon snow realized he actually knew nothing #GameofThrones pic.twitter.com/9WkR9OCl0I

Both Jon and Tyrion were far too optimistic for their own good when it came to Daenerys doing the right thing, evidenced perfectly by their reactions to her unleashing hell. Tyrion especially has to feel bad — who is now (as far as I can recall) the only surviving Lannister — for betraying Varys.

The cinematography of #Arya and the white horse in this scene of #GameofThrones is what the Battle of Winterfell should have been. pic.twitter.com/RaspLDZlNM

Forget the contentious writing and the rest, the real thing to talk about from this episode was the cinematography. While it was perhaps a bit on the nose, a white horse (possibly a nod to the apocalypse but it’s doubtful) smeared in blood and death appearing before Arya in a destroyed King’s Landing was something horrific and beautiful.

So, again: Not what we were expecting, but still pretty good. There were a lot of great little moments (Qyburn’s head getting doffed, The Mountain’s face reveal, The Hound’s indignant laughter) during the standoff, but Cleganebowl ended the only way it really could with both Clegane boys falling to their deaths after a brutal fight. Rest in peace, Sandor, heaven has all the chicken you could ever want.

Remember that #DaenerysTargaryen vision from season 2 walking through the Red Keep as snow fell through the roof? That wasn’t snow. #GameofThrones https://t.co/ANs8p7Y4EM pic.twitter.com/vMIGXTrjft

Anyone who couldn’t see this coming hasn’t really been paying attention. Daenerys has been killing pretty freely since even before she made Dickon and his dad dick off, and we even saw this happening in a vision way back in Season 2. Daenerys finally snapping has been coming, but it was still a shock, something that Game of Thrones has struggled to deliver for a long while.

2. A Badass Until The End

I need a VARYS WAS RIGHT t-shirt. He was always the best of them. He'll never be forgotten. #GameofThrones pic.twitter.com/J54U2elJbl

Varys was right. That’s all.

"If it wasn't for you I would have never survived my childhood. You are the only one who didn't treat me like a monster. You were all I had."

For an episode all about death and mayhem, its best moment was also one of its quietest. Jaime and Tyrion shared a final, tearful goodbye, which included Tyrion thanking his brother for never treating him like a freak like everyone else did. These two were always great when they shared a scene, and their tearful embrace may be Season 8’s most bittersweet moment.

READ NEXT: Game of Thrones & What Makes A Great TV Show Finale