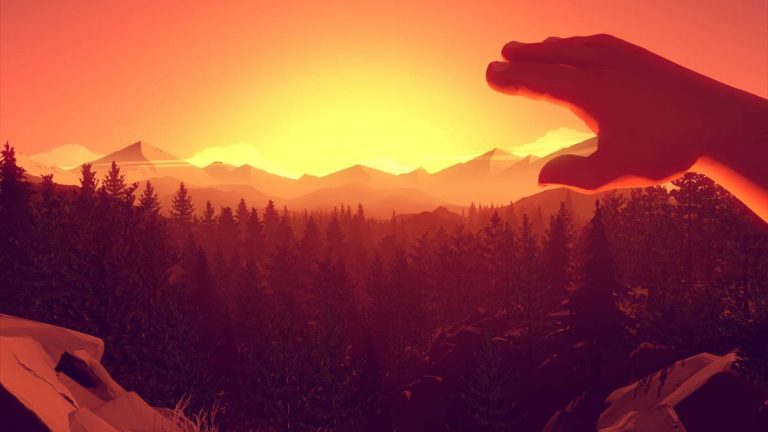 For a good fortnight in spring 2016, I had a sudden desire to quit my job, move to America and start my new career as a fire lookout. There something about being alone in the wilderness, in a tower with a bit of peace and quiet. Ideally I’d avoid having a weirdo lurking around which sadly wasn’t the case for Henry, our man in the tower with his trusty typewriter and friendly walkie talkie.

For the most part, I loved the story of Firewatch never pushing you onto the next part but always keeping pace very well. This is aided by the very impressive characterisation and voice work – Henry and Delilah’s relationship never feels fake or forced, it grows naturally and is believable. Mix that with conspiracies, mysterious assailants and fantastic stylised graphics, it makes Firewatch one of my favourite games this year. Firewatch is beautiful, like you’d expect from a first person exploration game: it’s stylistic but not so much so that the world doesn’t feel believable.

Campo Santo’s game takes place entirely in the Two Forks Woods, much of which is explorable immediately and while many people did not like the mechanic of having to find your way around the woods via orienteering using your map, I actually preferred not having a massive marker constantly on screen pointing me to the next objective. The whole act really keeps you rooted in the world, especially when coupled with the music, which is wonderfully chilled out and superbly composed.

The plot unwraps itself delicately, but never outright tells you what is going on. Paranoia and fear descend upon Henry and, to an extent, his supervisor, Delilah, who is usually present at the other end of his walkie talkie. Following a sighting of a shadowy figure during a routine trip out of his fire lookout tower, Henry witnesses an unknown person in his tower, a break in, an attack on a campsite and on Henry himself. Mysterious clues point Henry to a fenced off area of the woods that Delilah claims to know nothing about.

Delilah is an interesting character, easily one of the most interesting I’ve found in a game over the past few years. During my first playthrough, I didn’t question her character as such, but something didn’t sit right. During further playthroughs of the game it’s easier to poke holes in her story, there are elements that don’t make sense or may simply be made up. It does feel as it Delilah knows more than she’s letting on and the more I replayed the more I felt unease at Henry sharing so much with her.

Firewatch is quite simply one of the best games of 2016 – while there were a number of great games out this year, Firewatch was a shining example of its genre. It has a tight, fantastic script with superb acting, graphics and sound design and is something would be explorers and detectives should playthrough at least twice.