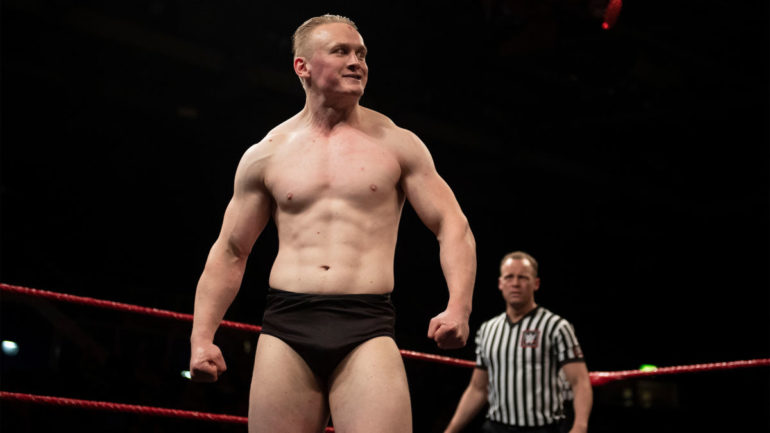 Former SSS16 winners have gone on to become some of PROGRESS’ biggest stars, as well as achieving international fame and being included in the conversation of being the best professional wrestlers in the world today.

Each year, the winner will receive a shot at the PROGRESS Champion. Last year saw ‘Mr. Independent’ David Starr defeat Jordan Devlin in the finals, in what was a fantastic match to send the PROGRESS ultras home happy. Starr utilised his opportunity to try and dethrone then-champion WALTER at Alexandra Palace in September, yet had his victory snatched away by a cash-in from Eddie Dennis.

In this list, we’re going to run down 5 potential wrestlers that could walk away from Ally Pally with a huge tournament win in May. Needless to say, there are plenty of dream challengers on hand at the moment, who could later challenge Cara Noir to an absolute belter of a title match in the near future. But perhaps it’s time for these 5 names to ascend into the upper echelon of the PROGRESS roster.

Make sure you throw down your own dark horses and personal bets in the comments below.

‘Unbesiegbar’ capped off the decade with an enthralling series of matches with now-champion Cara Noir, some fans are even going as far as saying that their trilogy was one of the greatest in BritWres history. PROGRESS fans are more than happy to see Ilja and Cara go at it one more time, but this time with the added layer of intrigue with the PROGRESS title on the line.

In order for Ilja to reach the peak of the PROGRESS mountain, he needs to walk away from Alexandra Palace with this year’s Super Strong Style 16 under his belt. Dragunov competed in last year’s tournament and made it as far as the semi-finals, defeating the likes of Cameron Grimes in quick succession, making him a very credible name to go the distance this year and win the whole thing.

Ilja has been a consistently well-booked member of the PROGRESS roster, and has a loyal following across Europe that could make his run in SSS16 a really fun one to watch.

The current PROGRESS Tag Team Champions have become one of PROGRESS’ headlining acts as of late. With Devlin now excelling as part of the NXT Cruiserweight division and Scotty Davis winning over fans across the UK since winning the NPS tournament last year, there’s plenty of reason to believe that either man could make it to the finals of this year’s SSS16, or perhaps even both could?

We’ve yet to see two PROGRESS Tag partners compete in a SSS16 finals match. It would be a treat for all wrestling fans to see the two Irishman do battle for a shot at Noir’s title. Davis and Devlin’s history have been intertwined since ‘The Prodigy’ first decided to get into wrestling. ‘The Irish Ace’ played a big part in developing Davis’ skillset, and was the man that initially brought Scotty to PROGRESS’ NPS tournament.

Having already done battle in the past as part of OTT Wrestling, it’s about time we saw a rematch under the PROGRESS banner. SSS16 could be a great opportunity to put the spotlight on both men, as well as the wealth of talent being imported from Ireland as we start to see these two men flourish in their singles career.

‘The Aussie Arrow’ has recently broken out into the singles division since his Aussie Open partner, Mark Davis, sustained an injury that will keep him out of the ring for the best part of a year. Fletcher has become a top star on the BritWres scene, winning over fans with his enigmatic style and outstanding match quality. Fletcher has recently competed for the PROGRESS and Proteus Championships. With a surge of momentum behind him, what better name to go the distance at Ally Pally?

Fletcher has picked up some big wins over the past few years, some being former SSS16 winners and he competed in the match that many fans considered the match of the tournament last year. Should PROGRESS see Fletcher as a potential big singles star, then it’s almost a natural choice to get to the finals.

A big win in the 2020 SSS16 tournament could mean big things for both Fletcher and Davis upon his return.

PROGRESS confirmed that one of their former World Champions will be making his official return to action as part of May’s tourney. Rampage Brown re-emerged as part of 2019’s Unboxing special in December, teaming with ‘Drilla’ Dan Moloney to take on Moustache Mountain. Brown has been a mainstay of the BritWres scene and one of the founding members of PROGRESS and other prominent promotions.

Rampage is without a doubt one of the best Heavyweight performers on the scene, often being matched with fellow big men and given enough time to tell an intriguing story while showing off his impressive feats of strength. It’s time for Rampage to remind everyone of just how integral he is to the indie scene by picking up some big wins at Alexandra Palace and maybe even punching his ticket to championship glory.

A match between Brown and Cara Noir would be an interesting one to say the least. It would be Noir’s first big challenge as champion, and a perfect chance for Brown to start putting over fresh talent as part of his comeback run.

The current NXT United Kingdom Champion made his return to PROGRESS a matter of weeks ago, teaming with the Anti-Fun Police in a victorious effort against More Than Hype. WALTER has yet to claim his rematch for the PROGRESS Championship that he never lost. When Dennis cashed-in his opportunity, he pinned David Starr, not ‘The Austrian Anomaly’.

WALTER remains one of PROGRESS’ biggest draws, especially now that he’s become one of NXT’s headlining attractions. WALTER would definitely start to shift a few more weekend tickets, should PROGRESS choose to use him as their yearly WWE entrant. In previous years, NXT stars Kyle O’Reilly and Kassius Ohno have both proved that they’re just as dominant as ever before on the indie scene by making it to at least the semi-final stage; the latter of the two competing in the 2018 finals against tournament winner, Zack Sabre Jr.

WALTER could easily come in as a favourite. He’s yet to join the hall of SSS16 winners and would fit right in with the likes of Will Ospreay, Aleister Black and Travis Banks. Either that or WALTER could do some huge honours for one of the other potential winners, perhaps handing another shocking victory to fellow NXT UK star Ilja Dragunov?

Either way, WALTER could quickly turn heads towards PROGRESS this May when they return to Ally Pally for Super Strong Style 16.