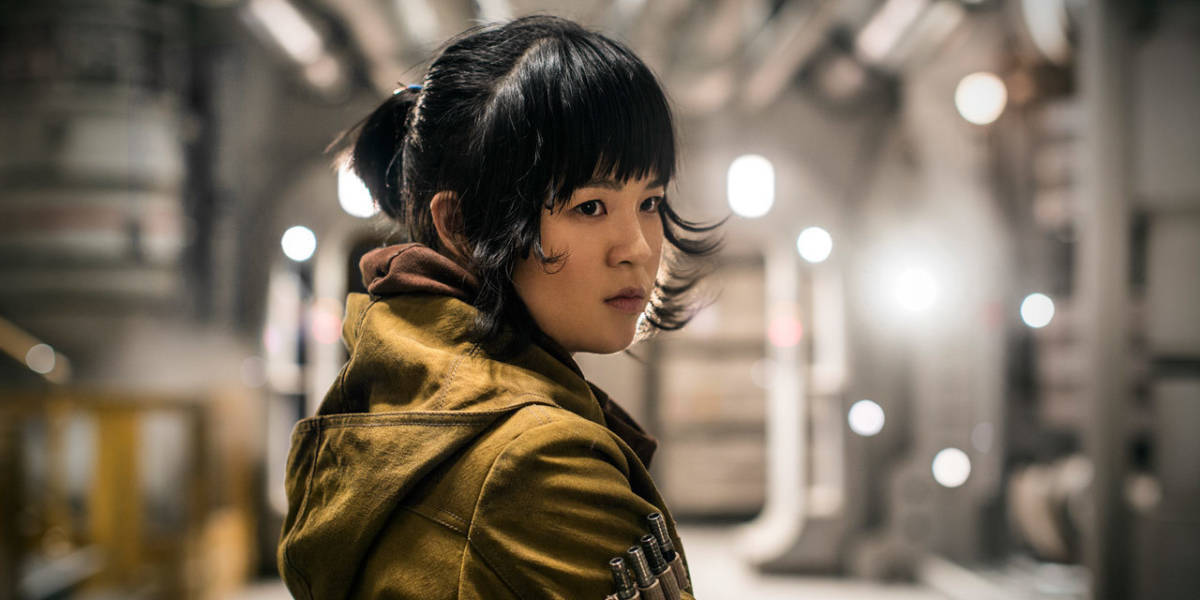 Kelly Marie Tran is one of the breakout stars of The Last Jedi, now known to most Star Wars fans as Rose Tico, the maintenance worker who becomes one of the heroes of Episode VIII. Tran is pretty vocal on Instagram about everything she loves and hates, and we decided to put together a list of five things we really dig about Kelly Marie Tran:

HER LOVE OF STAR WARS

Before auditioning for The Last Jedi, Kelly Marie Tran had never actually seen any of the Star Wars movies, according to BuzzFeed. But since auditioning for and appearing in The Last Jedi, she’s become a great fan of the series, and particularly adores everything that her co-workers on set are doing. She cried at the premiere of The Last Jedi (who wouldn’t?!) and won over fans everywhere with her genuine excitement at becoming part of the Star Wars universe. She even posted a photo of herself on Instagram hugging John Boyega’s Finn costume, something I think a lot of us would do if we got the chance. As the series continues to grow and develop, I’m sure we’ll see a lot more Star Wars love from the actress, who was already a self-professed Harry Potter and Lord of the Rings geek before her audition. Welcome to the world of Star Wars, Kelly Marie Tran! There’s a lot of Jar Jar to catch up on.

HER LOVE FOR LAURA DERN

Laura Dern, known to Star Wars fans for playing Vice Admiral Amilyn Holdo in The Last Jedi, is someone that Kelly Marie Tran admires. So much, in fact, that Tran’s friends make her a “Laura Fern”, a silver Christmas tree adorned with photos of Laura Dern.

Both Tran and Dern have a passion for the Star Wars universe which caused them to get more than a little emotional while on set; Dern started welling up when she first saw Chewbacca during her first day of shooting:

HER SENSE OF HUMOUR

Before appearing in The Last Jedi, Kelly Marie Tran was actually a professional comedian, and this sense of humour shines through both on-screen and during her interviews and other press appearances. She is often seen making fellow cast member John Boyega crack up laughing, and her positive attitude to the entire Star Wars experience makes us all unable to stop smiling.

HER APPRECIATION OF HER FANS

Being a die-hard geek herself, Kelly Marie Tran knows what it means to lose yourself in a fictional world, and she’s supportive and appreciative of each and every Rose fan who has kind things to say about her and her work. She was seen hugging fans at The Last Jedi premiere (as well as hugging Daisy Ridley when she got too emotional!) and she even went over and introduced herself in a pub to a group of people who were talking about The Last Jedi–luckily they only had good things to say about Rose.

She also went on a hugging spree at The Last Jedi premiere, and got especially emotional when she saw one fan dressed as Rose:

HER REFUSAL TO ACCEPT HATE

Unfortunately, some of the negative reactions to The Last Jedi have been more than just criticisms of narrative or characterisation, they’ve been full-blown racist and misogynistic attacks directed at Kelly Marie Tran, harassing her as an Asian-American woman. Her Wookiepedia article was edited to include racial slurs, and “fans” on social media have echoing some of these hateful sentiments.

Instead of shying away from the hate, Tran continues to update her Instagram with positive posts that express her love of her fans and of the Star Wars universe, as well as pride in her Viatnamese heritage.

The official Star Wars Facebook page also told people where to get off after negative comments about Rose Tico were posted on the page. For every troll out there, Tran has a thousand supporters, and she doesn’t seem fazed by the racism directed to her online, continuing to entertain and support her fans.

Do you have anything to add to our list? Let us know in the comments below!