5 Reasons Why Brock Lesnar Should Retain At SummerSlam

Is another Seth Rollins reign the best course of action? 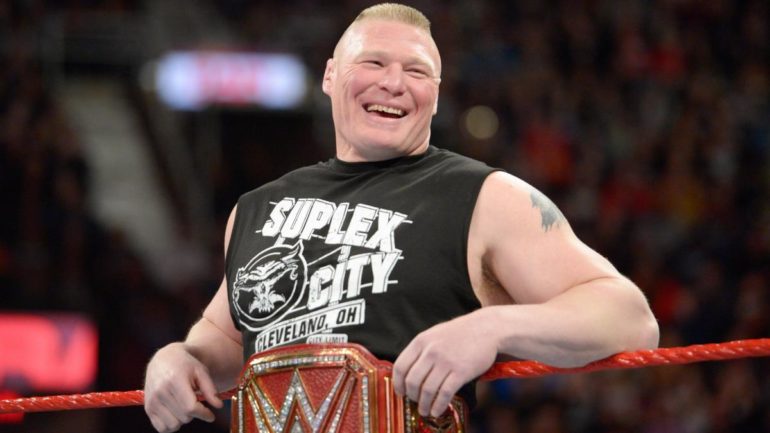 It’s a hot button topic these days, as we find ourselves in the midst of yet another Brock Lesnar world championship reign. A man who was once the most exciting name on the roster is often met with apathy or outright derision from most fans presently. It’s a fair stance, as Lesnar loves to pull a disappearing act after big matches, often not being seen for months at a time.

He now finds himself in possession of the WWE Universal Championship for a record third time. His Money in the Bank cash-in on Seth Rollins sharply divided fans and rightly so; we thought we were done with Brock on top. How naive we all were. Lesnar’s set to defend his title this Sunday at SummerSlam against Rollins and many people are likely rooting for Brock to lose.

However, there is a case to be made that this might not necessarily be the best outcome. Here are 5 reasons why Brock Lesnar should retain the Universal Championship at SummerSlam.

5. It Renders His Cash-In Pointless

A simple point to get us started, but one worth mentioning. The men’s Money in the Bank briefcase has lost the lustre it once had. Recent winners include Baron Corbin and Braun Strowman, who both failed to convert the case into a world championship. You’d have to go back to 2016 to find the last successful holder before Brock, when Dean Ambrose cashed in on an unsuspecting Seth Rollins (poor guy), immediately after he’d won the belt from Roman Reigns. The last time someone cashed in on a champ who’d actually held the title for a reasonable length of time? Ironically enough, it was Seth Rollins on Brock Lesnar at WrestleMania 31.

Indeed, the case has not had a whole lot of stability since that fateful heist of the century in 2015. We’ve seen two champions lose their crowns on the same night they won them, as well as two holders mucking up their cash-ins. Brock Lesnar could finally be the one to actually have a proper Mr. MITB run. While him winning the case made zero sense, he carried it well (the boombox was amazing), cashed in on a weakened champion who’d taken the belt from him, and now he’s making his first defence. If he drops it at this juncture, then what was the point in the cash-in in the first place? If the case acts as the means to Brock having a substantial reign, it’s granted more prestige as championship opportunity.

4. Seth Rollins Has Cooled Off

You hate to see it, but the once beloved Seth Rollins just isn’t cutting the mustard as RAW’s top guy right now. That’s not entirely on him, he’s had to carry a main event feud with Baron Corbin of all people. Seth’s major problem is that he doesn’t actually have a real character of his own, he takes on the personality traits of those he shares a storyline with.

When he was part of the Authority, he was a corporate suck-up. When he was taking on Triple H, he was the King Slayer. Now that he’s feuding with Brock, he’s the Beast Slayer. He lacks an identity that’s unique to him. If he weren’t such a tremendous in-ring performer, it would be hard to make a case for him as a top guy.

The Seth Rollins who was having record performances in gauntlet matches isn’t there anymore. He’s been replaced with a guy who cuts generic babyface promos and gets beaten up a lot. Aside from his outstanding match with AJ Styles, what was memorable about his Universal Title reign? He’s cooled off significantly and hot-shotting the title back to him won’t fix that. We need the workhorse Rollins back, the guy who took on anyone and everyone in classic matches. Keeping him away from the title presents WWE with an opportunity to rebuild him.

3. Paul Heyman Is Running The Show

Following on from the previous point, we’re seeing more power over RAW being transferred to Paul Heyman. Drastic changes need to be made to improve WWE’s output and they’ve more than hit the emergency button by bringing in wrestling’s mad genius. How does this relate to Brock? It’s obvious: Paul Heyman is Lesnar’s onscreen manager (sorry, advocate) and is now in charge of the red brand. If there is one man who can book a compelling Brock Lesnar world title reign, then it’s the man who knows him better than anybody else. Paul and Brock are incredibly close, but their relationship is taking on a different context now.

We used to be in a position where Brock’s power was keeping Heyman employed. He only got brought back initially because Brock didn’t want to cut promos. Now that Paul has a significant amount of power to wield behind the scenes, Lesnar’s far more likely to listen to creative suggestions from a man he has so much respect for. Personally, I’d like to see how a Heyman-booked Brock Lesnar Universal Title reign looks. Who knows? It could be completely different from what we’ve grown accustomed to. It’s worth a roll of the dice.

2. Someone Else Could Use The Rub Of Beating Brock

Rollins got his shot at putting away Brock and it didn’t do much for him. Granted, he didn’t exactly win clean, but as someone who was in the building when that title change went down, I can confirm that the crowd exploded at Seth putting Lesnar away to open the show. The magic of that moment seems like a lifetime ago already — what can WWE do that’s new to have Seth win again? If he cheats for a second time, it doesn’t reflect brilliantly on him, as it’s definitive proof that Seth can’t beat the Beast one-on-one. On the other hand, if he goes over clean, why the hell didn’t they do that in the first place?

Brock has to regain his unstoppable aura by pounding Seth to dust and reaffirming his place as the final boss of WWE. At which point, it’s high time a new candidate gets their shot. The most obvious choice is Drew McIntyre, who many of us assumed would be the one to get Seth’s spot at Mania in the first place. Drew’s currently stuck in a limbo of being everyone’s henchman, but he can easily break out of that mould, look at him. Going back to the Heyman factor, he understands the process of building a character and a story. Who’s to say that he doesn’t already have a name in mind to present as the silver bullet for Brock? If this person were able to put Lesnar away clean, it would legitimise them for life.

1. It Keeps Brock Away From SmackDown

With SmackDown’s move to Fox rapidly approaching, we can expect a hard brand split and a distinct look to differentiate from RAW. When you’ve got two shows on different networks, you’re going to want to make the separation clear. It can’t come soon enough, as the Wildcard Rule has made for some real nonsensical storytelling, to the point where most of us aren’t sure who’s on which brand anymore.

If there is one thing that will remain the same, it’s the state of the world titles. The Universal Championship was specifically created for RAW and has stayed there for the last three years. You can’t exactly move it either, seeing as the damn thing’s red. This is important to note as there have been constant rumours that Fox want Brock on the blue brand. The chances of him being sent over are virtually non-existent if he’s got the Universal strap. If Brock goes to SmackDown, he likely ends the Kofi Kingston dream reign and corrupts the WWE Title without the Heyman influence. It’s best to keep him on RAW where we’re already used to him holding the world title hostage. If Brock takes out Seth, there’s a chance to do something new with the supposed changed direction of things, that gets thrown out of the window with SmackDown.