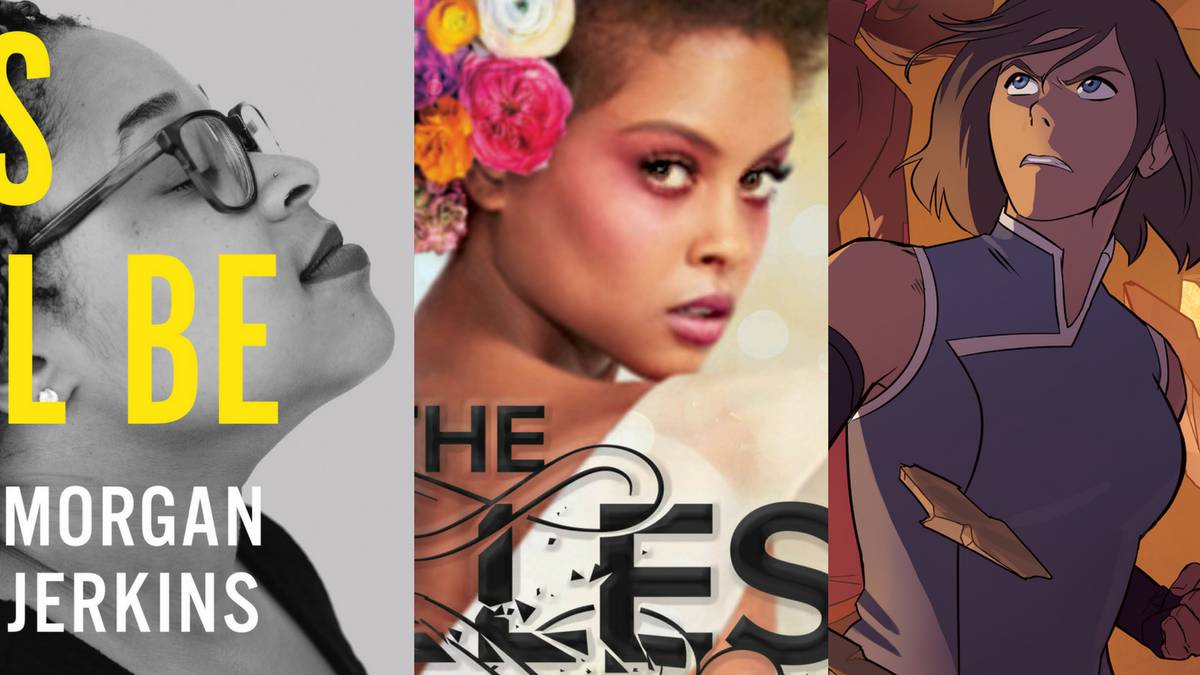 February looks to be a big month for books, with lots of really exciting titles hitting bookshelves! From fantastic essay collections to graphic novels and middle-grade fiction about Indian Princesses slaying demons, here are some of the biggest new books of February 2018.

After Alice’s girlfriend breaks up with her for confessing that she’s asexual, Alice is pretty much done dating. That’s until she meets Takumi. Let’s Talk About Love looks like a promising, fun, lighthearted YA rom-com, with an asexual protagonist.

The popular cartoon series Legend of Korra continues in this comic adaptation, written by the show’s co-creator. Delving further into the politics of Republic city, in Korra’s role as the Avatar, and her newly established relationship with Asami, Turf Wars Part I was a fan-favourite, with some brilliant writing and stunning artwork. The second part of the comic promises to be just as fantastic.

Hirsch’s debut book delves into British identity itself, particularly when it comes to conversations about race, which are often hushed up or skirted around. Hirsch looks to tackle the conversation head-on. Books about race in Britain are, unfortunately, rare. But post-Brexit, it’s more important than ever to have books that examine race and identity in modern Britain.

The original Speak novel was released in 1999. It was widely-read despite – or perhaps because of – the difficult theme it aims to tackle. Of the rape of a young teen and how she must cope with it. In 1999, this was not a topic that was often spoken, or written, about. In 2018, though we’re having an international conversation about rape, sexual assault, and consent, it’s still something that most people in media don’t manage to handle with the nuance and depth it deserves. Speak was an extremely important novel when it was first published and in 2018 it, unfortunately, remains just as important and relevant. Its graphic novel adaptation promises to be just as great as the original novel – if not better. Not only is it Anderson’s words and her story, but the artwork is done by Emily Carroll – the fantastic illustrator whose first book Through The Woods is absolutely brilliant.

American Panda follows Mei, a Taiwanese-American girl who, at seventeen, is a freshman at MIT. She’s following the plan that her parents have laid out ahead of her, but Mei’s own plans in life aren’t exactly in line with her parents’.

Nell Crane lives in Blackwater city, where everybody is living in the aftermath of a disaster. All the survivors are missing parts. Nell, herself, has a clock that ticks in the place of a heart. When she finds a mannequin hand in the river one day, Nell is suddenly struck with a plan – she’s going to build a whole person out of spare and found parts. But in a city that now fears technology, Nell might have signed up for more than she bargained for.

The Belles is set in a world where everybody is born grey, and only a belle can bestow beauty upon people. The story follows Camellia, who wants to be the favourite belle. But she soon finds out that being the favourite belle is not exactly what she thought it would be. The Belles is a book about beauty and everything that comes with it.

Zadie Smith is one the most iconic British writers of our generation. She is the award-winning author of White Teeth and Swing Time. Her new book is a collection of essays about a variety of topics that are relevant to our times. Ranging from pop culture to politics, Feel Free promises to be another brilliant piece of work from Smith.

Renée Watson is the acclaimed author of This Side of Home. Her latest novel follows Jade, a young, black girl who believes that she has to get out of her poor neighbourhood in order to make something of herself. Her mothers tells her that she must take advantage of every opportunity that comes her way. But Jade is tired of the idea that she always needs help, and she’s ready to show the world how she sees the world.

This Will Be My Undoing

Morgan Jenkins’ debut book is a collection of essays about living at the intersection of black and female in America. It weaves together the personal with the social and political in order to consider being a black woman in modern America. It has received high praise from many authors and publications, including Roxane Gay.

The Prince and the Dressmaker

Prince Sebastian’s parents are searching the kingdom for a suitable bride for him while the prince is too busy hiding his secret identity as Lady Crystallia – a Parisian fashion icon. Frances is a dressmaker with big dreams. When she’s hired by the prince, she has to keep his secret, which might mean jeopardising her own career. The Prince and the Dressmaker is a cute and heartwarming graphic novel.

Peggy Orenstein is the New York Times bestselling author of Girls and Sex and Cinderella Ate My Daughter. She is known for writing brilliant feminist criticism that is as important as it is topical. Don’t Call Me Princess is her latest book, and it collects some of her most resonant essays.

The Serpent’s Secret by Sayantani DasGupta

Kiranmala has always heard fantastical stories from her parents. Then, on her twelfth birthday, her parents disappear and a rakkosh (a type of Bengali demon) tries to eat her alive. She realises that there might be some truth to her parents’ stories and that she really might be an Indian princess who has to slay demons and find her parents.