10 Years On, The Red Riding Trilogy Still Pulls No Punches

A decade after its release, Red Riding is bleak, powerful, and more relevant than ever. 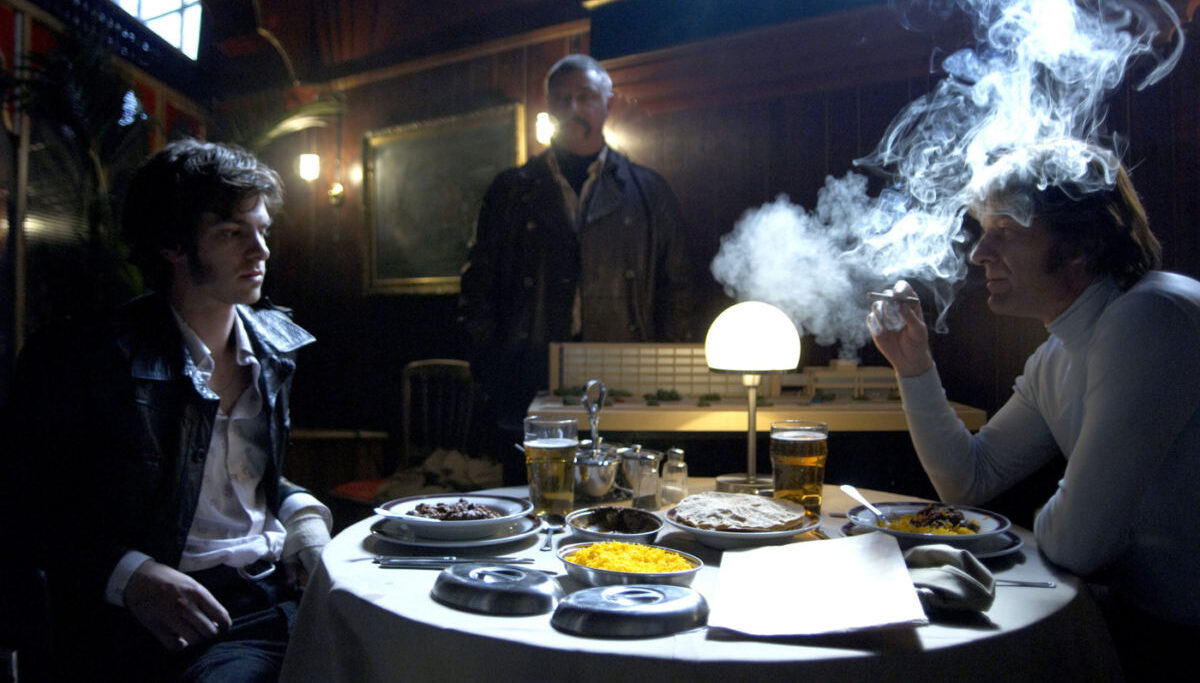 When the Red Riding Trilogy first came out in 2009, I was a kid, too young to quite plumb all its depths. One scene sticks in my memory from that first viewing, though – a pair of jolly coppers turning up and, without a word, grabbing hold of the protagonist and smashing his hand in a car door. For those who might want to get off this ride, I’ll tell you now, that’s one of the least distressing scenes the films have to offer.

Being a period piece, ranging from 1974 to 1983, by definition it’s not going to show its age. If it’s dated at all, it’s in the meta-sense, all too clearly one of the high-water marks of the golden age of television. When it was released, The Sopranos and The Wire had just wrapped up, and Breaking Bad and Mad Men were just beginning to gather steam, yet all these have entered the history books in a way Red Riding hasn’t, even though it could go toe to toe with any of them in terms of quality.

A lot of critical darlings are talked about in terms of not holding the viewers’ hand, but Red Riding takes that to its very edge. Much more obtuse and it would slip over into ‘impenetrable’, or worse, ‘arthouse’. Further complicating things, especially for international audiences, are the omnipresent Yorkshire accents. Roger Ebert reckoned that some parts merited Trainspotting-style subtitles, and while normally it takes a lot less than that for me to scoff at our transatlantic cousins, through this Ebert does hit upon the salient point of Yorkshire being a distinct culture within England.

The recurrent toasts ‘to the north, where we do what we want’ now can’t help but evoke smutty fantasy series Game of Thrones and its campaign for northern independence – but coming as it does from a gang of crooks and perverts, it ends up a dark reflection of a show which at the time of broadcast did not yet exist. Another eerie Thrones parallel comes in that Sean Bean is present as lord of the manor, and, as is inevitably the case, killed off before the first act is over, although even death can’t put a stop to his legacy.

‘Do what we want’, here, refers to a conspiracy in the truest sense – a vast intermingling morass of all stripes of crime. Most everyone onscreen is guilty of something, and as such have a very real impetus to cover up for their fellow conspirators. Even the ostensible good guys quickly have their own sins brought to bear against them. The characters actually trying to investigate the whole mess have a rough enough time getting a handle on it all, so the viewer can certainly be forgiven for finding themselves a little lost.

For a lot of crime dramas this would be a death knell. With your Taggarts and your Columbos, half the fun is following along with the mystery, having your own go at working out whodunit. But Red Riding is a far cry from stuff like that, closer, if anything, to a documentary. While it’s only loosely based on fact, it’s that same kind of lavish portrayal of a particular time and place, one intended to give a distinct taste and flavour. That toast ‘to the North’ gives something else away – this production is intended for outsiders, those not of that place. It worked for Ebert and his American readers, and it worked for me, less than two hundred miles away from the films’ stomping ground.

What may pique the interest of younger contemporary viewers is the presence of a young Andrew ‘Spider-Man’ Garfield in the first film as a plucky reporter. A certain shameless portion of the audience will be happy to hear there are many scenes where Garfield gets his clothes off, although that’s only occasionally a fun thing. In most productions his character would seem like a bit of an amoral shark, but here, as seemingly the only man trying to investigate the murder of a child, he’s a solid good guy. By comparison to real-life British journalists, he’s a saint.

One minor but notable character is a serial-numbers-filed-off version of Stefan Kiszko, who really was wrongly convicted for the murder of a child and served sixteen years for it – a miscarriage of justice which was parodied in the animated series Monkey Dust, with the happy-go-lucky Ivan Dobsky (“I never done it, I only said I done it so they’d take the rat out of me anus”). Actually seeing a terrified simpleton being leant on by the police to confess to a crime he didn’t commit somehow robs the affair of its humour.

The second film of the trilogy revolves around the Yorkshire Ripper, but where a conventional crime drama would place that front and centre, here it’s, if anything, a distraction. We’ve already seen, very clearly, that there’s worse beasts out there than serial killers. First and foremost of these is Sean Harris, easily the most memorable of the many corrupt and torture-happy policemen of the trilogy, who seems genuinely deranged. There’s one startling moment where, despite having used as many homophobic slurs as you’d expect from a copper in the ‘70s, he abruptly French-kisses his current victim after staging a mock execution.

And yet Harris isn’t even the worst on offer. As said, he comes off crazy-ape mental, at times stopping just short of declaring ‘it was me, I’m the crooked cop’, but a number of his colleagues are doing all the same awful stuff while completely compos mentis. David Morrissey’s detective may have his doubts about it all, but that doesn’t stop him from torturing people with the rest of them. There’s two separate instances where, after smashing someone’s hand, he casually notes ‘you should get that seen to’ – and the real horror isn’t the violence, but the banality. The way he’s clearly so used to hurting people that he’s got his patter all worked out.

It’d be an oversimplification to divide the cast into victims and perpetrators, but it wouldn’t be so very far wrong, either. These kinds of categories aren’t immutable, but they’re not so easy to scrub out. One of the minor (but, as it transpires, most important) characters finds himself unable to escape his own victim status, even when he’s pulled a gun on his abuser. He does, though, finally manage to escape the north, an exodus he shares with David Peace, who wrote the books on which the films are based and who long ago quit the shores of Britain for the comparatively friendlier climes of Tokyo.

The words ‘gritty’ and ‘realistic’ get thrown around a lot, especially when you’re talking about something which, for all the colour present, might as well have been filmed in greyscale. But there’s one thing in this that’s truer to life than pretty much any similar work of fiction, and here it is: the big conspiracy, the thing everyone’s been covering up, isn’t some grand plan or scheme. There’s nothing romantic about it. It’s simply that some awful men wanted to rape some children, and some other awful men aided and abetted them for personal gain.

In this respect, at least, the issues Red Riding touches upon are more relevant than ever: earlier this month, registered sex offender and billionaire Jeffrey Epstein was pinched by the feds on trafficking charges. Epstein had previously been convicted of soliciting underage girls, for which he received 18 months in prison, during which he spent six days a week on ‘work release’ – the kind of deal which only the incredibly wealthy ever seem to see in court. (Though that featherweight sentence may have more to do with prosecutor Andrew Acosta’s assertion that he was told Epstein “belonged to intelligence”.)

The bigger story is that Epstein’s list of contacts has been revealed to include any number of powerful figures – including current US President Donald Trump, former US President Bill Clinton, Britain’s Prince Andrew, former British Prime Minister Tony Blair, and former Israeli Prime Minister Ehud Barak. Essentially a who’s who of powerful people you’d prefer weren’t part of some mass paedophile conspiracy.

Of course, Red Riding probably wasn’t drawing upon Epstein. A far more likely candidate in that regard for any work set in the UK is Sir Jimmy Savile, children’s entertainer, friend to prime ministers and royalty, and, it was revealed posthumously (but was an open secret beforehand), the worst kind of sex offender. That’s the truly scary thing. The idea of a well-connected child abuser whose powerful friends cover for him? That’s not a one-off. That’s a type.

The full story of Epstein’s ring of perverts is yet to emerge (although given the scene when Sean Bean offers Garfield some compromising photos of a local politician, you can draw your own conclusions). The full story of Savile may never emerge, thanks to his relationship with Baroness Thatcher and the Royal Family, and subsequent governments’ craven desire to not rock the boat. But if there was any wider plans in play in either case, of this I am sure: just like Red Riding, it will all have been over something as ultimately tawdry as a real estate scam.