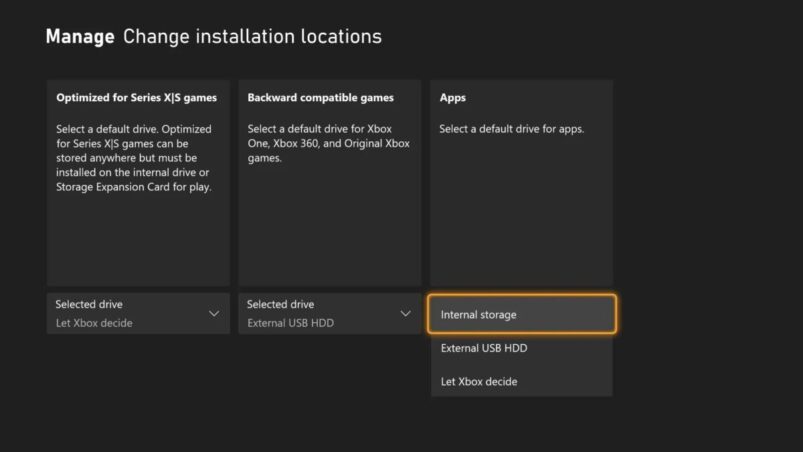 As games are requiring more and more storage space, most gamers are having to seek external solutions in order to manage their storage on consoles. Fortunately, Microsoft have updated the Xbox Series X & S to allow players to choose which storage device to install their games and apps on. While that was available anyway, Microsoft have improved the feature to allow players to choose what content should be installed where.

Here’s how you can change your default storage location on Xbox Series X & S.

In order to change your default storage location on Xbox Series X & S, you need to head to your console’s settings, go over to storage devices, then select “change installation location“. You’ll only be able to select this feature if you’ve got an external device or storage expansion card plugged into your Xbox Series X & S.

From here, you can then select where you want your Xbox Series X & S optimised games will be installed, along with Xbox One, Xbox 360 and Original Xbox games as a group. You can even change the default installation location of your Apps too.

On the surface, this might sound like a bit of a useless feature, but the quality of life improvements that this change will provide can’t be ignored. Instead of only being able to choose which storage device all games are installed on, you can now split your installations across all of your devices.

The reason why you’d want to do this is because games that have optimised for Xbox Series X & S require either the console’s internal SSD or the Seagate Storage Expansion Card. Trying to install them on an external hard drive will either mean you can only play the Xbox One version, or you might not be able to play the game at all. With this feature, you can instead spread your installations out across all of your devices, ensuring each game is in the right place.