Whoever was behind this should be ashamed. 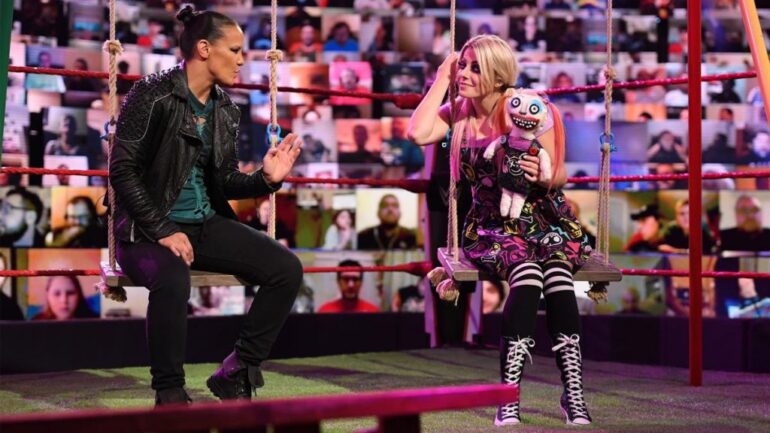 WWE hit an all-time low as part of this week’s RAW with their show-closing segment between former NXT standout Shayna Baszler and a freaky doll. Fans were already alienated by the idea of ‘The Queen of Spades’ being embroiled in a feud with an inanimate object, considering how far she has fallen since her dominant run as NXT Women’s Champion and her equally monstrous debut on the main roster in 2020.

Alexa Bliss hasn’t exactly been the star of the show either, failing to impress with her fem-Fiend character, a gimmick which has failed to get over in the same way as Bray Wyatt’s incarnation and has provided the WWE Universe with more questions than answers. So putting both of these acts together for a singles feud with no real rhyme or reason is forcing both superstars down the path towards career suicide, bringing the entire show down with them.

WWE’s latest flair for the macabre in Lily has barely intrigued the audience, let alone convinced them to even humour their efforts to produce a budget wrestling Annabelle. There is literally nothing that’s attracting eyes to the Alexa’s Playground skits, a talk-show bit that will eventually be looked back on as a far cry from the likes of Piper’s Pit, The Highlight Reel and Miz TV.

There’s no logical reason why Shayna Baszler, a legitimate tough fighter, would be intimidated by the spooky hijinks. This all started because some pyrotechnics mysteriously went off during some of Shayna’s matches, which were chalked up as the machinations of Alexa Bliss, just because. Bliss would later reveal that Lily was in fact behind these magical occurrences because, for some reason, Lily didn’t like Shayna. This then led to a series of backstage segments where Shayna would kneel down next to the doll, looking all menacing, telling it that she also didn’t have any fond feelings for Lily. Alexa took this badly and the rivalry continues.

This sort of writing is precisely the reason why so many WWE fans are being put off the product and choosing the alternatives. You’d think that the rising success of AEW, NJPW and even smaller companies like Impact Wrestling would push the WWE creative department to start thinking a little more outside the small box of ideas they’ve been dipping in and out of since the Ruthless Aggression Era. It’s almost like they’re following a very specific flowchart with each new superstar they acquire, and unfortunately Shayna Baszler has fallen into the wrong option.

I’d imagine that Triple H especially would have something to say about the recent treatment of his former prized female superstar, Shayna Baszler was once considered one of the top prospects for the main roster, someone that would steamroll over everyone including the likes of Charlotte Flair and Becky Lynch, which admittedly she did until WrestleMania 36. This is one of the many occasions where NXT call-ups have ultimately failed because of shoddy creative decisions and a general apathy towards how the fans respond to the storylines.

This current feud will only end in disaster and will continue to get worse with each passing week. Considering that the Alexa’s Playground segment actually closed Monday Night RAW this week shows that the folks backstage are actually looking at this and seeing money. I’m not quite sure who’s the particular director behind this, but they seriously need to check the ratings because this week’s final act pulled one of the lowest in recent memory.

RAW is on a downward slope, and feuds like this are an embarrassment to the company when in such dire times. If WWE actually want to recover from this, they really need to put more effort into writing investing storylines, allowing the wrestlers to do what they do best and give them a modicum of creative control. AEW aren’t perfect by any means, but they’re at least giving the performers an opportunity to be accountable for their TV time. If a segment fails, then that’s down to those involved in the ring as well as the think tanks backstage.

Really and truly, WWE just need to move on from this awful narrative. Allow ‘The Queen of Spades’ to demolish Alexa in the ring, tear Lily into shreds and get her sights set on the RAW Women’s Championship. Meanwhile, Bliss should shake off the Fiend gimmick and allow Bray to return on SmackDown Live to continue the legacy of his ghoulish character, rather than sully it with poor storylines like this one.

Let Lily become the latest in a line of forgotten storylines that were doomed from the start, alongside the ‘Sister Abigail’ gimmick and the Katie Vick saga in the Hall of Pain. For your own sake, WWE, wake up: the Lily/Shayna Baszler angle will only lead to losing even more fans than you already have.

READ NEXT: What’s Next For ‘The Fiend’ Bray Wyatt?