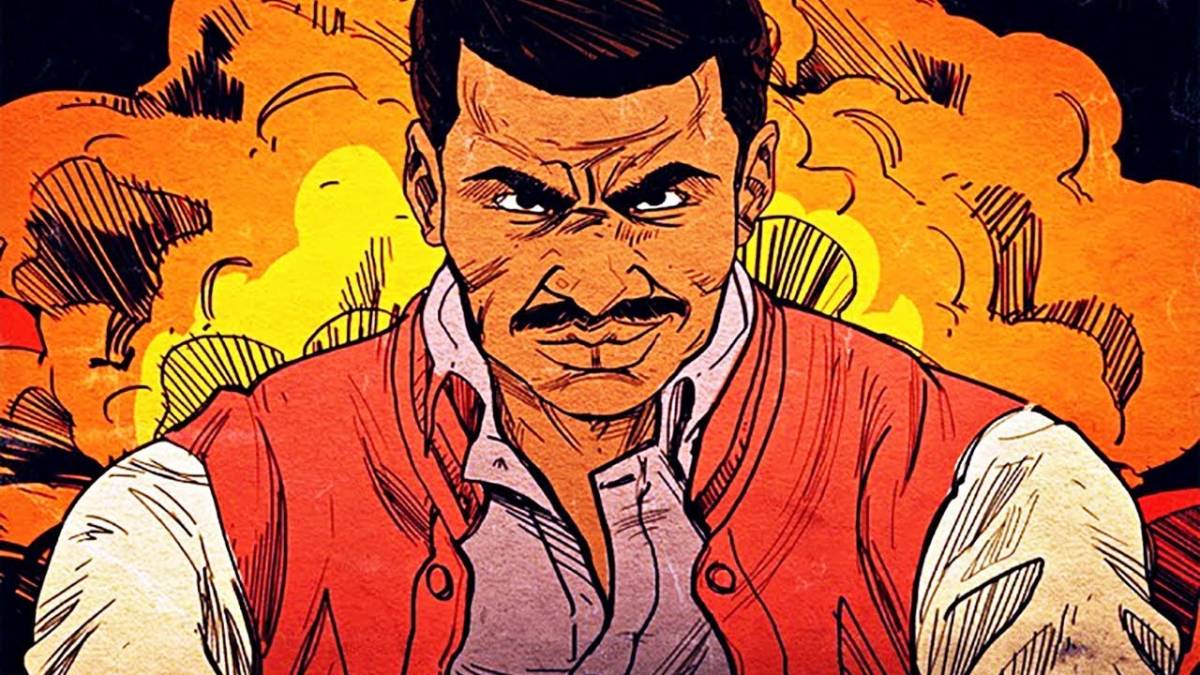 The Freedom Chronicles, Wolfenstein II’s comic-book-like episodic expansion, has opened in earnest after the teasers of Episode 0 with the story of “Gunslinger” Joe Stallion, a promising rookie African American football quarterback now forced to play soccer in rigged games against Nazi Aryan teams.

I say “in earnest,” but really that’s a bit of a strong term. The Adventures of Gunslinger Joe is, to put it short and blunt, more of a whimper. Everything about this sub-2-hour piece of content feels like it was produced on a hilariously low budget, from the comic presentation with cheesy voiceovers to the copious reuse of assets and environments from the base game.

Boasting to take players from Chicago to space, none of the locations in The Adventures of Gunslinger Joe feel particularly unique or memorable. “Chicago” consists of an underground Nazi research facility like we’ve seen many times before, followed by an urban stretch that is cobbled together from the Roswell and New Orleans levels in The New Colossus. Hell, it even reuses the Panzerhund mayhem run from New Orleans, except without the killer track blasting in the background. Space is just Venus again, with Joe smuggling himself to the base there in search of his nemesis, a sadistic dentist-turned-Nazi-collaborator.

Even Joe himself doesn’t feel very original, a disappointment considering he is a talented black athlete in Nazi-controlled America, something I feel the base game would have addressed with the same success that they did with the rest of the cast. Joe’s central abilities are the same as BJ’s Ram Shackle gadget – namely turning enemies into paste when they are sprinted into, taking down certain weak walls and objects, regenerating armor, etc. There are no new weapons or upgrades – instead you quickly acquire most of the game’s small arsenal extremely quick, with a few of the upgrades hidden in plain sight or inside slight detours and secret areas. These are specific upgrades, you don’t get a choice like BJ does. It’s never explained how Joe has all of the Ram Shackle abilities despite wearing nothing but a varsity jacket – I’d hate to be on the receiving end of his tackle in a football game if he turns people into clouds of jelly.

Joe’s abilities and the upgrades you’re given for your weapons make it plainly obvious that he is not a stealth character – the regenerating armor and fast acquisition of the better weapons means you’re gonna be on the offensive in a loud way all the way through. It is puzzling then that the commander system is here completely unchanged, as is the inclusion of a fairly simple but uninteresting stealth segment against a Panzerhund. Commanders are often placed hilariously far into an area, usually on a different floor or through enough rooms and walls that getting to them without triggering an alert is impossible.

Instead of BJ’s immensely useful and satisfying hatchets, Joe instead gets cans as his thrown weapon (his melee attacks are brutal hand to hand takedowns, usually involving a broken neck), which are supposed to be able to knock out or knock down enemy soldiers. I knocked out precisely two people with them – soldiers wearing helmets seem to be immune to this, and since the vast majority of your foes are helmeted soldiers, it is of questionable utility. The knockdown is more reliable, taking a trooper out of the fight for a moment, but you could have just as easily shot them down instead and made it permanent. The pattern of encounters in The Adventures of Gunslinger Joe is definitely geared towards hunting down commanders ASAP after the alert sounds before reinforcements overwhelm you. It’s nice to see the mayhem embraced, but the complete removal of any pretenses towards stealth really would be welcome.

I had hoped that, in the face of no improvements or additions to gameplay, The Adventures of Gunslinger Joe would at least tell an interesting and well-written story from a new perspective in the Wolfenstein alternate history, the strength on which The New Colossus stands for me. Unfortunately, the DLC instead squanders a great premise with a hokey comic book presentation, practically zero character development and only a passing examination of what exactly is being done to those who the Reich deems “sub-human.”

The initial facility you escape from has some disturbing visuals and letters/journals that touch on the brutal, immoral research being done by Nazi scientists on minorities, athletes and whoever else they decide to cut up, but the rest of the story is just Joe angrily narrating about killing the main villain. It’s all told through comic stills with narration and dialogue voiceover, none of which is noteworthy or fun in the way some of the main game’s cast are.

None of BJ’s gruff poetic introspection and deadpan humor, Max Haas’ childish outbursts and playful tendencies punctuated by moments of brilliance or strength, or Set Roth’s barely-coherent but humorous and brilliant ramblings. Normally a comically evil Nazi officer has some mileage to it, but when you’re making an expansion to a game full of comically evil Nazis, another one isn’t exactly gonna cut it. The Milkshake Nazi is a better antagonist than this guy, and the former is only around for a couple of minutes.

The Adventures of Gunslinger Joe is, in the end, not a bad piece of content; it’s disappointing. Without a good story and characters to back it up, and no new environments or features on the gameplay front, the enjoyable-but-flawed combat of Wolfenstein II isn’t enough to carry even the couple of hours it should take to get through this. If you’ve already got the Season Pass, there’s no reason to not play it – killing Nazis with dual shotguns is always a good time to some extent – but if you’re on the fence, don’t bother. Replay The New Colossus on the other timeline instead, perhaps.

Verdict
Bringing nothing new to the table gameplay-wise and featuring a barebones story with flat characters, everything about Episode 1 of the Freedom Chronicles feels like it was cobbled together on budget and time constraints. It's functional, but it lacks even a fraction of the impact and enjoyment to be found in the full game. It is certainly not a reason to drop the cash on a Season Pass.
6