5 Books To Read For Shakespeare’s Birthday

It's practically a national holiday! 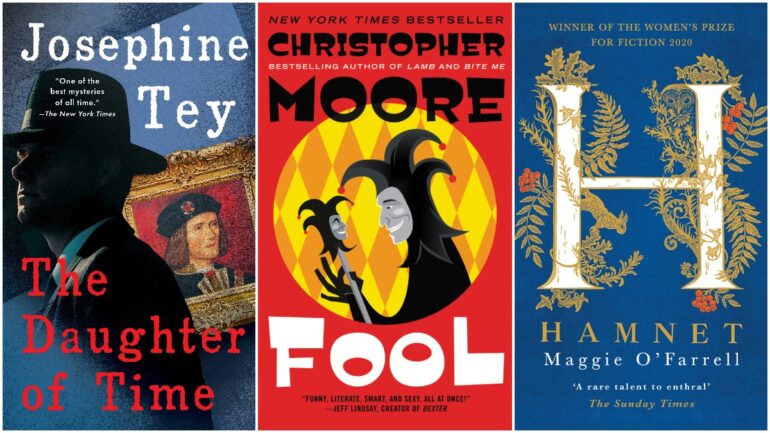 5 Books To Read For Shakespeare's Birthday

Happy William Shakespeare-versary, my friend. I’m sure that most of us have those obscure days we treat as our own private national holidays, and Shakey’s double birth/death day is definitely one of mine. I might celebrate by finally getting round to watching the National Theatre’s new Romeo and Juliet production for the first time, or I might re-watch Bill, the completely wonderful 2015 film from the creators of the BBC’s Ghosts.

I’ve also been reading plenty of Shakespeare inspired books lately, but that isn’t unusual; part of what fascinates me about the man is his mythology, and I can’t get enough of seeing other people explore that. Whether re-interpreting his work to say something new, or trying to look sideways at Shakespeare himself, there is always something interesting to say.

I’ve already recommended Fools and Mortals once already in recent weeks, but that is because it is just such a fun read. Cornwell’s standalone novels are usually fairly left field when compared to the rest of his work, and this one is no exception. Our main character is Richard Shakespeare, one of William’s younger siblings, who has followed his brother to London in an attempt to make it as an actor. He gets caught up in a plot to steal one of William’s new scripts, and we are treated to a romp around Elizabethan England.

Richard is undoubtedly the star of this story. William is there, and the brothers’ difficult relationship forms a key part of Richard’s character, but this is Richard’s life – and he has to prove he is worthy to himself before he can even think about impressing his brother.

You may have come across the Warm Bodies film adaptation, starring Nicholas Hoult and Teresa Palmer, that came out in 2013. I didn’t know that there was a book first, but it makes sense; this is such a bookish story – and I mean that in the best possible way.

If you like your Shakespeare-inspired literature to have a light touch, then Warm Bodies is for you. Alluding to Romeo and Juliet, the story is set in a post-apocalyptic future. R is a zombie in the early stages of decay, who lives with a bunch of other zombies. R doesn’t much enjoy the taste of human, and he can almost string words together, which makes him a bit of a zombie maverick. R saves the life of Julie, a human, and their love is going to go on to have far-reaching consequences for zombies and humans alike.

Long time readers will know I’m a bit of a fan of Terry Pratchett, and in Christopher Moore I am delighted to have found another comic author with a strong voice and a similar sense of absurd humour. Fool is not like Warm Bodies; we are not alluding to Shakespeare here. We are knee deep in one of his stories, albeit told from a different perspective.

The titular fool, known as Pocket, is the guy that sticks close to King Lear’s side for most of that play. In Moore’s novel, Pocket becomes a puppet master; dismayed at how he can see Lear’s madness playing out, he is determined to try and make it right. Fool is such a funny book, one which describes itself as bawdy and sees fit to include a tongue in cheek content warning. The irony in that, for me personally, is that Shakespeare himself loved a bawdy tale. He’d probably really like Fool.

Like Fools and Mortals, Hamnet doesn’t focus much at all on Shakespeare himself. In fact, he isn’t even named in the book; he’s known only as the husband, or the father, or the tutor, and there are long stretches in which he doesn’t appear at all. Hamnet is Agnes (Anne) Shakespeare’s story, and she is front and centre in this tragic tale. The titular Hamnet is the eleven year old son, who historical records show died in the year 1596, and the novel tells that story, as well as flashing back to the early life of Agnes.

I’ve only just finished reading Hamnet and, honestly, I still do not quite have the words to describe it. O’Farrell’s writing is dreamlike and other-worldly; the veil between our world and something more magical is thinner on the pages of Hamnet, and in the perfectly imagined life of Agnes. If you read one book from this list, make it Hamnet. You will not be disappointed.

5. The Daughter of Time – Josephine Tey

In 1990, The Daughter of Time was voted number one in the top 100 crime novels of all time, compiled by the Crime Writer’s Association. It beat any number of better-known novels, such The Spy Who Came In From The Cold, or anything by Agatha Christie, or Arthur Conan Doyle. It is an intriguing story, for sure; Alan Grant (Tey’s detective who appeared in several other novels) is laid up with a broken leg, and he uses the time to try and determine if King Richard III really was the vicious murderer of Shakespeare’s play, or if he has been wrongly maligned by history.

If you are a bit of a history nerd (guilty) or, of course, a Shakespeare fan, then The Daughter of Time is the perfect novel for you. Grant unravels and examines the story based on the actual evidence – as any good detective would do – and Tey uses the pages of her book to ruminate on the power of myth and urban legend. It is great fun, and feels relevant in this age of propaganda and fake news.