Why Steve McQueen Will Never Go Out of Style

A legend in Hollywood and among petrolheads. 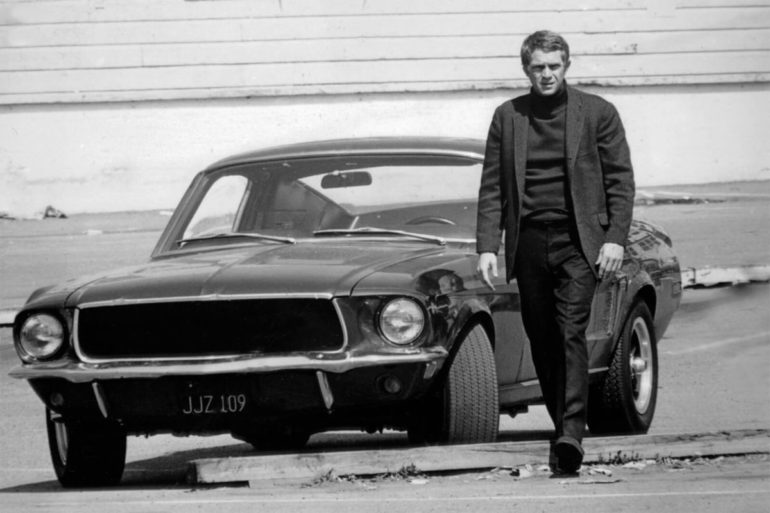 On January 10, 2020, a 52 year old Ford Mustang is auctioned off in Kissimmee, Florida. The winning bid is $3.7 million, setting a record price for an American muscle car. Upon first glance, the unrestored vehicle is nothing special. The dark green GT fastback has dents and is generally unremarkable, save for the fact that it is the most mythic movie street machine of all time.

It is the holy grail of motorized pop culture: the Mustang from the 1968 film Bullitt and it is the very car that Steve McQueen drove in said movie. In the annals of automotive lore the car is simply legendary, not because it is a vintage movie prop, but because the legend himself drove it. It has been 40 years since the death of Steve McQueen, yet he remains more relevant than ever. What is the secret to the King of Cool’s eternal cool?

The short life and career of Steve McQueen has been exceedingly well chronicled. Most biographies cover the broad strokes of how Terrence Stephen McQueen was born in Indiana in 1930 and that his father, a stunt pilot, abandoned him and his mother when he was a baby. McQueen overcame a troubled childhood and after a stint in the Marines, found himself on Broadway. At the age of 28, McQueen hit it big on the silver screen with the popular TV western Wanted: Dead or Alive. After the show ended in 1961, McQueen embarked on an amazing film career that made him the most in demand actor in the world.

The long list of McQueen’s box office hits include classics such as The Magnificent Seven, The Great Escape, The Thomas Crown Affair, The Getaway, The Towering Inferno and of course, Bullitt. At the height of his fame in 1974, McQueen put acting on hold to pursue his true passion of auto racing. He then returned to acting and completed three final films before succumbing to cancer. He died in Mexico at the age of 50. With 29 films to his credit, three marriages and two children, McQueen led a remarkable life that was over far too soon.

At the time of his death in 1980, he was not at the height of his popularity. His last hit movie was The Towering Inferno, made in 1974. But more than 45 years since his last major film success, Steve McQueen still enjoys a healthy popularity. In fact, the myth of McQueen not only remains relevant, it is gaining traction. With Quentin Tarantino’s 2019 film, Once Upon A Time In Hollywood, a new generation has been introduced to Steve McQueen.

McQueen was actually approached by Charles Manson on the street a few months before the murders occurred, with Manson trying to pitch a script to him. A quarrel ensued with McQueen breaking Manson’s nose. It was later confirmed by Manson family member Susan Atkins that this incident put McQueen at the top of Manson’s notorious celebrity kill list. McQueen was also supposed to be at the dinner party where the 1969 murders occurred but, as his first wife Neile Adams recounts, he “ran into a chickie and decided to go off with her instead”.

When Steve got wind that he was atop Mansion’s hit list, he refused personal security. Instead, he began carrying his magnum pistol on him at all times. He even wore the powerful weapon at Jay Sebring’s funeral where he gave the eulogy. McQueen was an intensely private man during his lifetime. As a result, the curiosity about the man has continued since his premature departure.

McQueen has a meticulous estate that carefully manages his likeness, continuing his status as the fashion and lifestyle trendsetter in death that he was in life. There have been no less than 7 documentaries that focus on or feature Steve McQueen since 2015. Since the time of his death, over 30 books have been written about McQueen, including 12 within the last 10 years.

The most comprehensive being Marshall Terrill’s biography Steve McQueen: The Life and Legend of a Hollywood Icon. In September of 2019, it was announced that Wonderfilm Media has acquired the rights to Marshall Terrill’s 2010 book, with plans to adapt it into a feature film. Such names attached to the biopic include director Steven Soderbergh and actors Ryan Gosling, Channing Tatum and Jeremy Renner.

It seems the McQueen mystique has found a timeless place in the lexicon of celebrity reverence. Perhaps actor Damian Lewis, who plays McQueen in the Tarantino film, summed it up best when he stated simply, “Steve McQueen seems to get cooler with age”. McQueen lived life on his own terms and there is something inherently admirable about that, celebrity or not. The actor means more than a collection of classic film performances, he is the representation of the essential superstar maverick.

Today, Steve McQueen gets routinely described as: “the ultra-cool male film star”, “an icon of popular culture”, “the ultimate man’s man”, “a rock star on the screen” and “timeless icon”. That is the image of McQueen the movie star but it was also true of the man. Unlike many stars of the day, he did not hide behind a public facade to bolster his popularity. 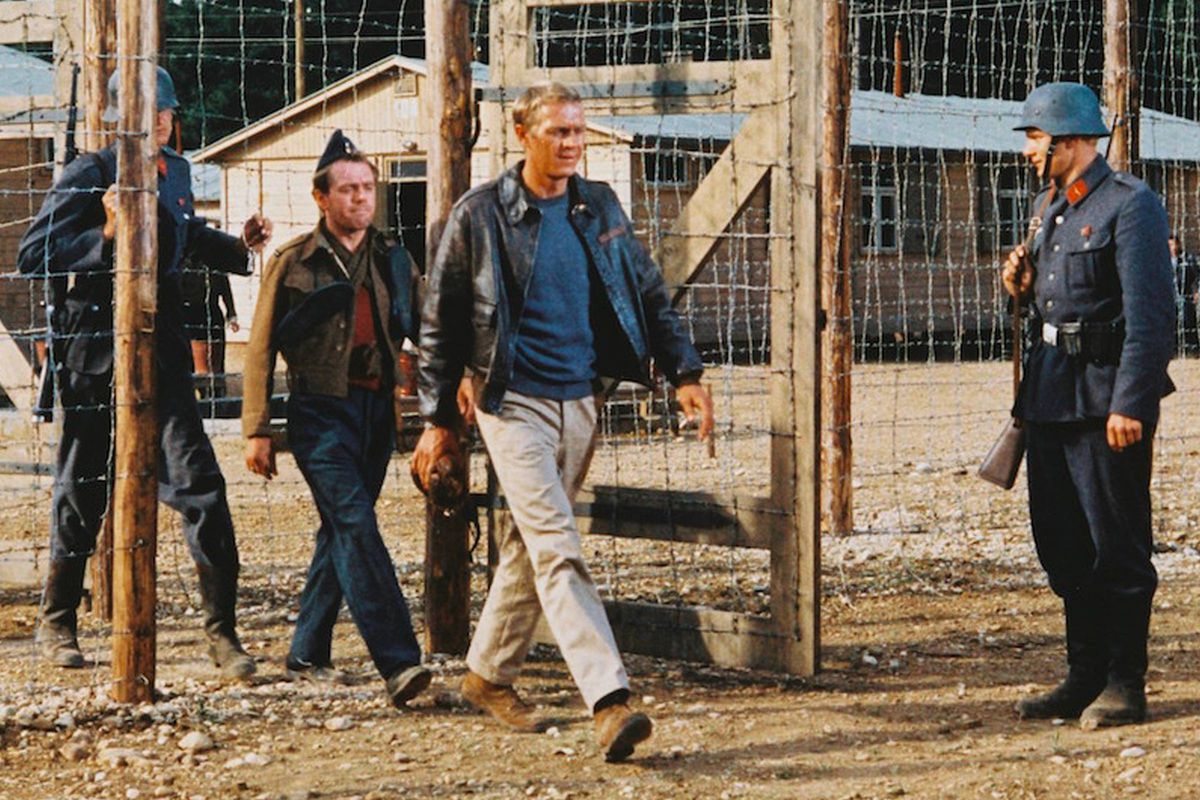 Steve McQueen’s ability as an actor is unquestionably an element of his vigorous legacy but by no means the reason for it. Although he was nominated for an Academy Award and four Golden Globes, Steve himself said “I’m not a great actor – let’s face it”. Even with his self-admitted lack of acting depth, Steve McQueen was one heck of an actor. His acting didn’t always give the feel of performance, however, because there was so much of him in every role.

In a 2017 interview, McQueen’s third wife Barbara Minty mentioned how she caught a fragment of The Magnificent Seven on television and remarked how “his cocky demeanor and willful personality as Vin in that movie was the same as Steve in real life”. Every part McQueen played had the unmistakable self-possession, genuine nerve, and a raw sincerity. The roles were different, but each character was unmistakable McQueen.

McQueen was most at home when at the controls of a fast machine. Steve once related his priorities like this: “Racing is life. Anything before or after is just waiting”. His aptitude as a driver and ability to do his own driving scenes, as in Bullitt and The Great Escape, made him a living legend among petrolheads. McQueen was a legitimate world class racing talent. He was so good in fact that while filming the glorious motorcycle chase scene at the end of The Great Escape, the other stunt riders could not keep up with him. McQueen had to shoot separate scenes wearing a German uniform to make the sequence believable. Although Steve was not allowed to jump the barbed wire fence for insurance purposes, the entire motorcycle chase scene effectively showcases McQueen chasing himself.

In 1971, Steve was featured on the cover of Sports Illustrated riding his Husqvarna dirt bike. In 1978, he was inducted into the Off-road Motorsports Hall of Fame. 19 years after his death in 1999, Steve was inducted into the Motorcycle Hall of Fame. McQueen raced competitively almost until the end of his life. The fact is that the actor preferred to risk his life on the racetrack rather than play pretend in the movies only fueled his mythic status and added to his larger than life persona.

Steve McQueen was nothing if not authentic. He didn’t put on airs to impress critics, and he certainly did not try to fit the romanticized image of the Hollywood leading man. Ironically, these qualities led to McQueen being Hollywood’s highest paid actor. Still, he never stopped being his own man. Just because the moniker “King of Cool” was bestowed upon him, it didn’t mean McQueen viewed himself that way. It was not indifference, Steve McQueen cared very much about the choices he made, he just didn’t care if anyone else cared.

40 years after his death, no one “has come close to McQueen’s mix of machismo and unflappability”. He was an original and made no apologizes for it. His appeal endures because he was the real deal, on screen and off. In the movies, McQueen played heroes who rode motorcycles but in real life, he was a genuine motorcycle hero. It was not the fact that McQueen broke all the rules; he lived by his own rules. He didn’t follow the mode because it was trendy, he established the trend. McQueen had a swagger that was all his own and it is one that will never go out of style.