Way of the Hunter: How To Make Money 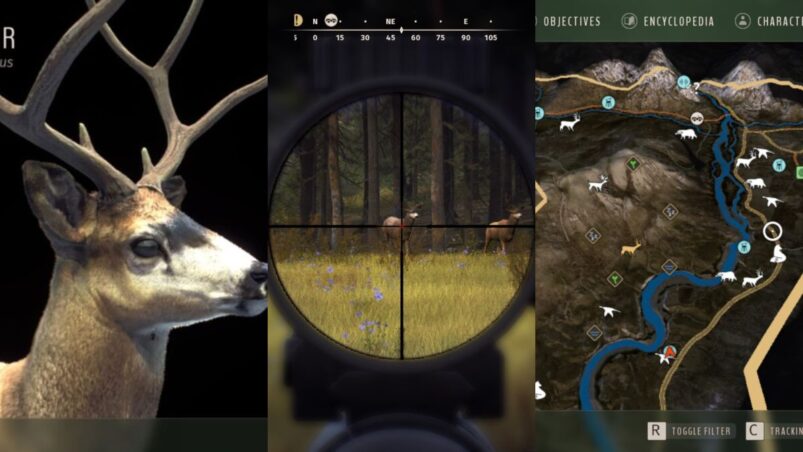 Way of the Hunter money

Way of the Hunter is a deep, immersive hunting and exploration simulator that puts you in the heart of the wilderness. It’s up to you to help your sick Grandpa take care of his affairs while he’s ill, and as a professional wildlife hunter, there’s a lot of animals you’ll need to track down. Not all of them are worth the work when you need cash, though, especially when you’re just starting out. Here are the best ways to make money in Way of the Hunter at the beginning of your story so you can focus on getting the upgrades and area unlocks that open up the world.

Deer are a great choice to focus on when you’re first starting out. These animals are a favorite of real-world hunters and are one of your earliest practice targets in the game. They’re also one of the easier targets to land a shot on because of said practice and their convenient location in the Nez Perce Valley, as you can easily fast travel right next to where they spawn when you find the small campsite there.

There are many types of deer, however, and some are worth more money than others. In the beginning, you’ll want to focus on Whitetail deer. While they are a bit harder to find than the more common Mule deer, Whitetail deer are worth the kill when you finally bag one. While your payout depends on the quality of your kill, Whitetail deer will get you closer to $600 per kill, whereas the Mule Deer will net you closer to $500. Considering most rifles and gun attachments will run you over $800 each, with area unlocks costing upwards of $2,500, deer make some of the best early game animals to focus on hunting.

Bucks in particular net you a lot more cash than does. However, you’ll want to try to hunt them either equally, or mix up the type of deer you choose to hunt. This is because hunting too much of a single animal can cause population imbalances in the wild. You can also interrupt nature by focusing too much effort on a single sex, and focusing on the females of the species will cause the population to drop like a rock.

Exploration in Way of the Hunter is key to staying at the top of the food chain. You’ll find collectibles, landmarks, campsites and even other lodges as you trek through the wilderness. Out of all these, you’ll want to focus on campsites and other lodges first.

The main reason for this is because these areas offer missions that can net you some good money. One of the earliest of these is found at a campsite to the southwest of your cabin in the Nez Perce Valley. Since it’s an order to cull the mule deer population, it’s one worth picking up since you can turn in the unsavory specimens you shoot towards the quest. You’ll also be given other missions periodically from your cabin’s laptop, so be sure to check your emails.

Part of the tutorial of the game is netting yourself a better rifle. While the game goes over firearms in depth, other tools fall a bit by the wayside. Early in the game, one of the best attachments to invest in is a better scope.

When using your default scope, you can get some good shots if you combine the sight from your binoculars and line it up with the scope on your rifle. If you get a good scope with a zoom of at least 9x, however, you’ll eliminate the need for binoculars in the early game almost entirely. Many animals in the first area of the game aren’t easily startled, so getting within range for a good shot will be incredibly easy. You should prioritize getting a better scope over all other tools early in the game, including items such as deer calls, since making your first shot a killing one will net you the most lucrative results should you sell the animal.

Way of the Hunter is a game that prioritizes planning, patience and preparedness. It can be tough to get your bearings out in the wilds, especially when you’re first starting out this hunting simulator. The tips in this money-making guide should provide any player with a good jumping off point so they can start carving their way through the wilderness at their own pace.

Way of the Hunter is available on PC, PS5, and Xbox Series X & S.

READ NEXT: Way of the Hunter Shooting Guide