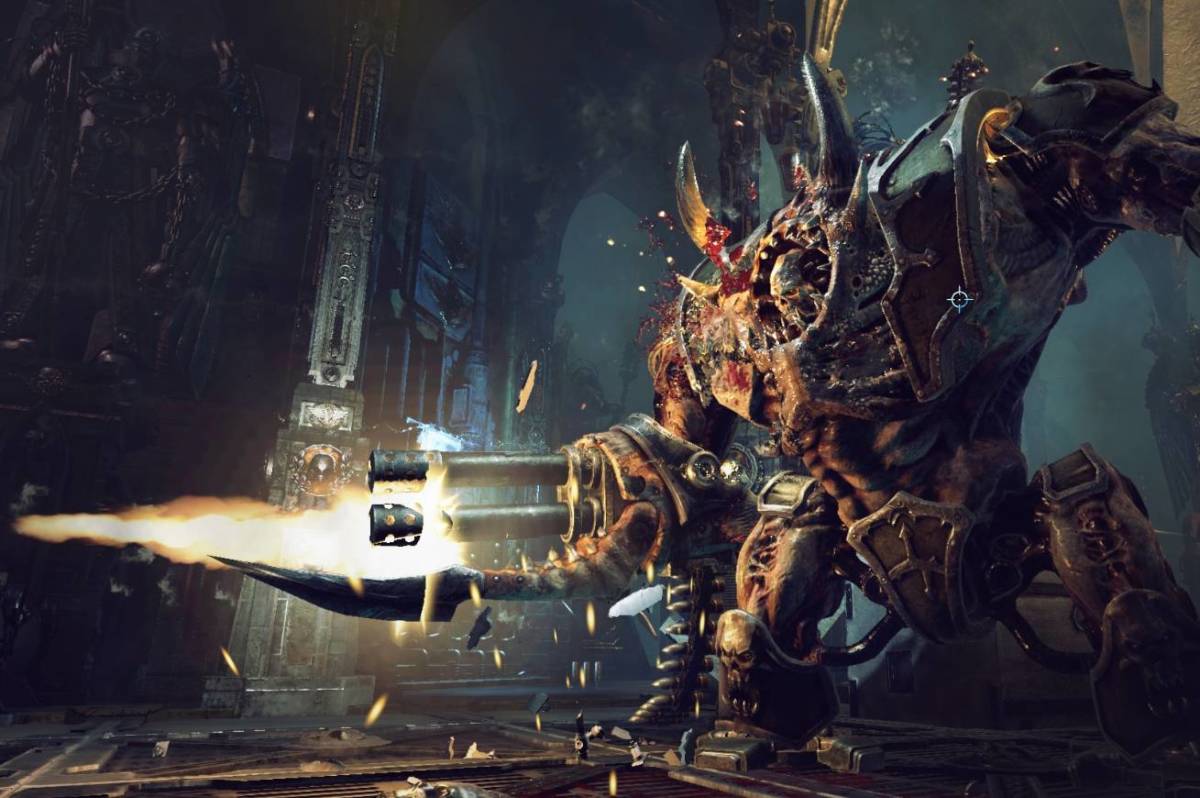 Lately, I seem to have fallen down something of a Warhammer hole and I don’t think I have been this engrossed in the dealing of the Emperor of Man and the heretics of Chaos since I was in sixth grade. Luckily, the experience has mostly been a good one.

Warhammer 40,000: Inquisitor – Martyr presents the Warhammer 40,000 universe well but in all honesty the story isn’t all that interesting, though it is adequately 40K-ish with plenty of betrayals and unholy heresy throughout. You play as the titular Inquisitor who is sent to root out a suspected heresy by one of your own order, your investigation leads you to the Martyr, a derelict ship thought to have been lost millennia ago. Naturally, all is not as it seems, and you might be uncovering an even bigger threat to the Golden Throne of Terra than you initially thought. Or is it an opportunity in disguise? Pretty run of the mill Warhammer fiction in other words, but it is more than enough to string you along in this kind of game. In your journey to unlock the secrets of the Martyr, you will be taken across a fairly large star map with plenty of station and planets to exterminate enemies on. 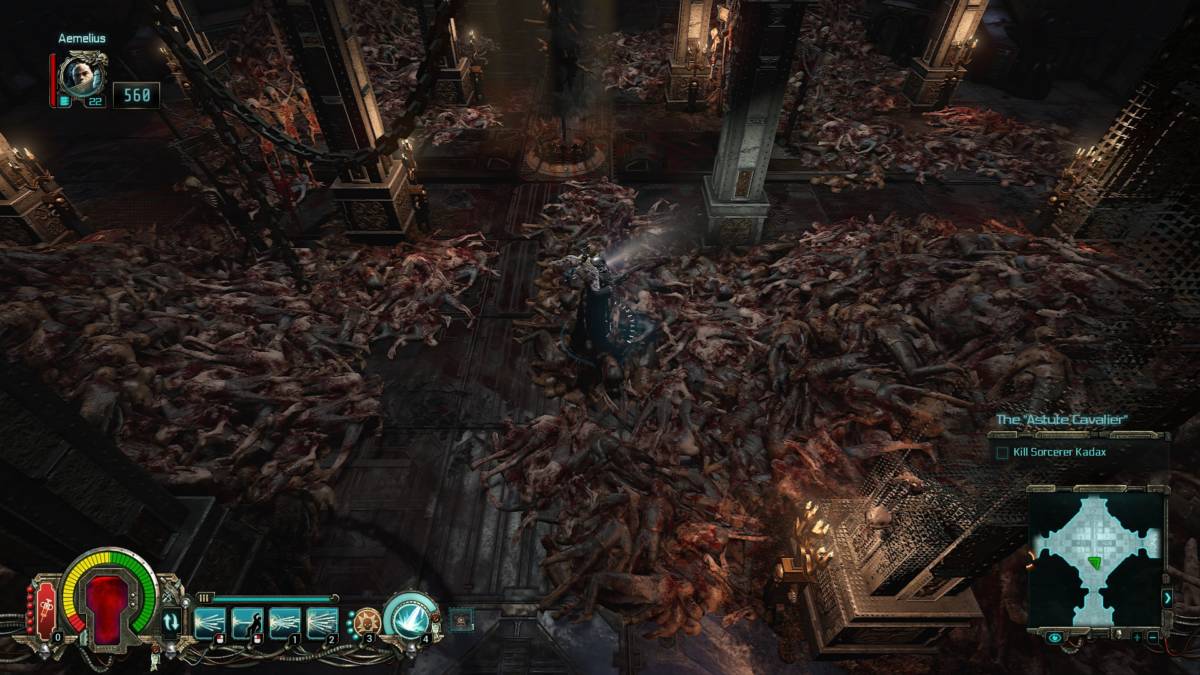 For the most part of the game, you will be fighting against the minions of Nurgle, Lord of Decay. Basically, the Chaos god of sickness, pestilence and rot. This means plenty of bloated and slimy daemons with too many hungry mouths and appendices for comfort. It is by no means the only enemy you will be facing however, other traitor legions like the Word Bearers and the Alpha Legion also make the guest list together with some rebellious local Imperial forces and the developers have promised other factions to join in down the line.

At its core, Inquisitor – Martyr plays like a Diablo which has taken the speed knob and turned it down 25%. You kill loads of enemies who regurgitate shiny treasures for you to collect upon death, but unlike Diablo, it emphasizes cover, suppression and long-distance weaponry instead of quickly running in and being invincible. There are three playable characters, a psyker, a crusader and an assassin, sticking with the Diablo comparison they are your mage, paladin and ranger. On top of the character itself, they each have specialized classes which, unlike Diablo, give you plenty of room to modify how you play. Try the melee focused crusader or assassin for a game that is closer to what you know in Diablo 3, or opt for the sniper class or heavy weapons class for something a bit different. In my playthrough, I played the most as a heavy weapons focused crusader, which meant I could take cover and lay down death with rapid fire weapons and area of effect abilities. When playing co-op, I teamed up with an Assassin that didn’t care much for cover but on the other hand could dodge around enemies and traps. So, the system seems flexible and you can play towards your own style and wants. 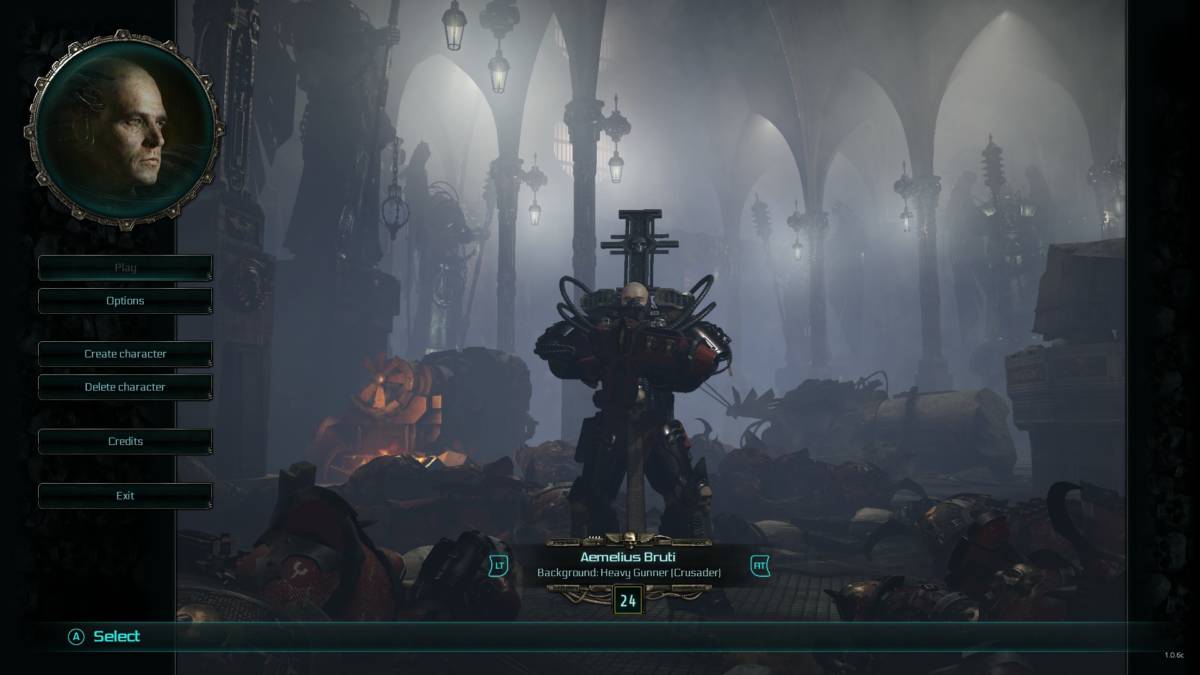 Bugs and the odd glitch aside, I feel that the systems of Inquisitor are very well thought out. There is a lot of flexibility in progression and the way co-op is handled is just best in class. The way the progression tree is set up makes it possible for you to eventually switch track or remake your specialization without starting over with another character. The crusader I played for instance, at first, he only has long ranged skills and things focusing on survivability but as you progress and perform certain feats, the rest of the character tree becomes available to you. So, you can start putting points in melee or dual wielding skill trees. This together with it being fairly easy to reset skill and attribute points makes it so that you don’t need to make the same character three times to test it out or see what you like.

My experience with playing these games online generally plays out something like this: One member of the party is faster and at a higher level than the rest and runs way ahead of the group, kills everything in sight and if it is an exceptionally bad game, takes all the loot and XP for themselves. The challenge becomes more focused on who can run through the area the fastest rather than working together to survive and succeed. Inquisitor – Martyr has, through some dark magic I don’t fully understand, completely taken care of this. 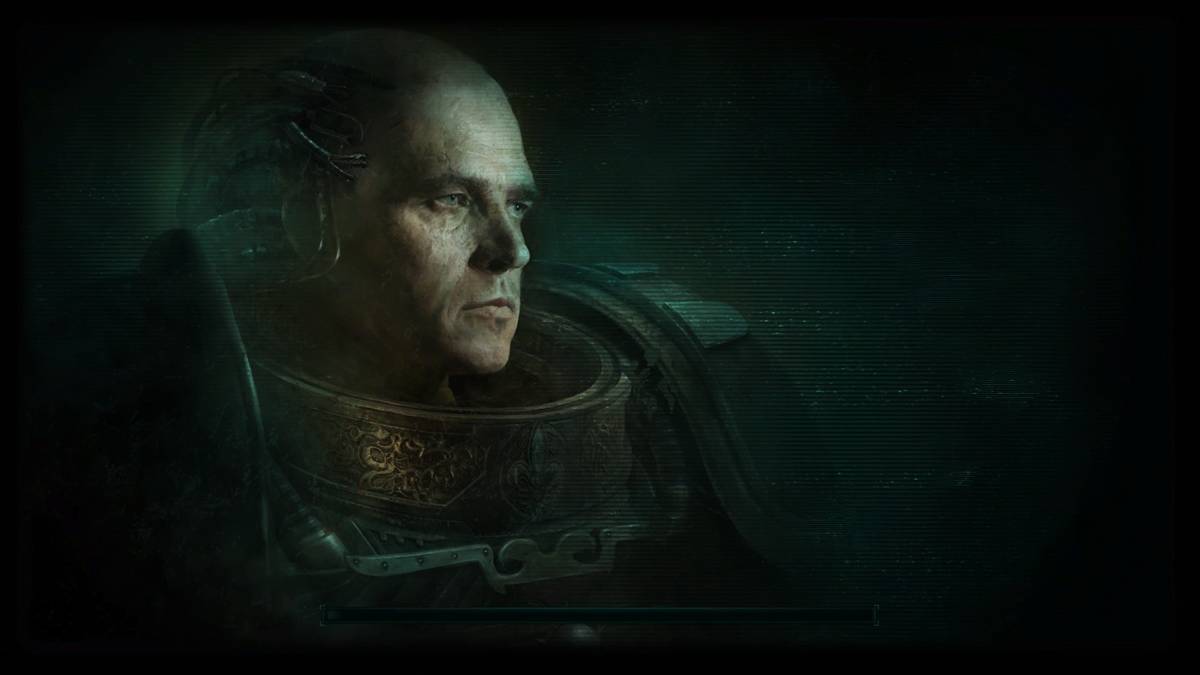 Even though our levels were quite different, I could have a completely balanced, challenging and fun time playing together with friends in co-op. As I mentioned, I am not sure exactly how it does this, but it somehow manages to adjust the players’ power level so that everyone can have a good time. Loot drops are private, and XP is handed out after each mission so there is no rush to kill the most or the biggest enemies. The increased challenge when playing with others also promotes working together to take down the bigger mobs or bosses. Since I am a middle-aged father who can’t spend every living hour in front of one single game, this is most welcome.

The biggest departure from other action RPGs like Path of Exile, Grim Dawn or Diablo is that Inquisitor – Martyr doesn’t have a big open world where you are constantly running from town to town. Instead, the structure of the game is mission based and takes place on a multitude of different locations and maps. This not only makes more sense from a setting perspective where you jump across the galaxy from planets to spaceships to derelict stations, but it also lets the developers be more flexible in terms of mission design, enemies and future expansions. 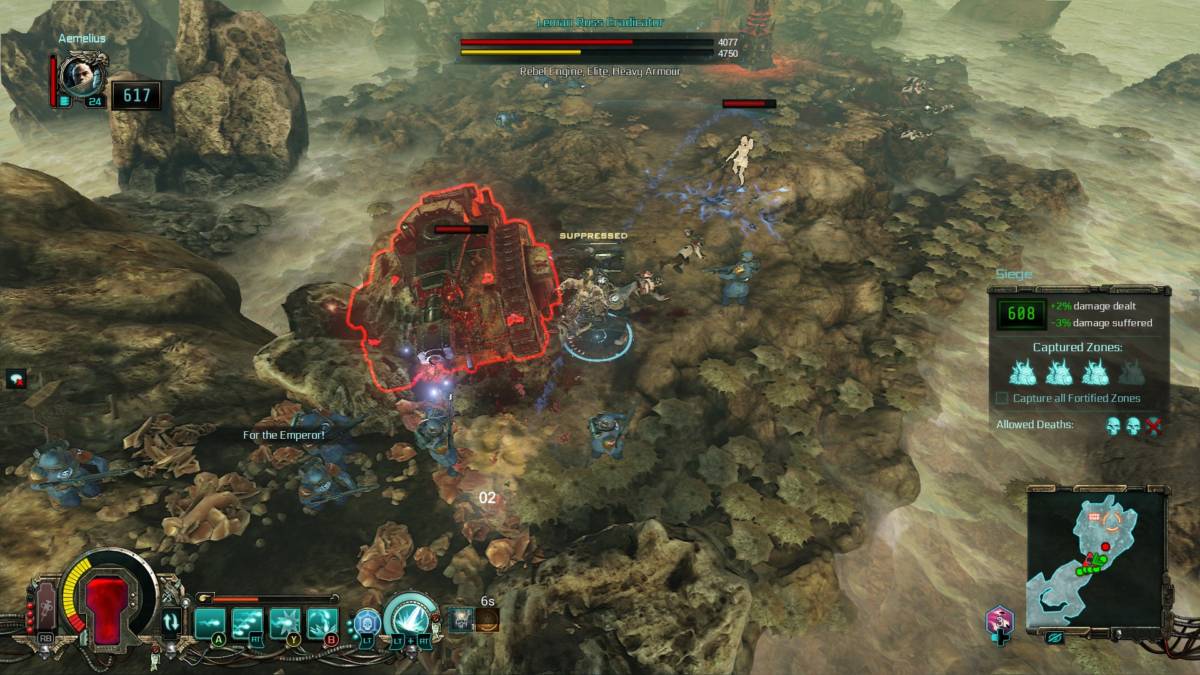 For instance, in one of the more unique mission types you are tasked with capturing and holding certain victory points together with friendly troops that actually do a decent job of helping out in battle. Not having the big connected map might irk some purists but I can see why they did it and I, for one, completely embrace the change. It makes playing short sessions easier as well as each mission usually takes about 10-15 minutes to complete. It also lends itself to being easily expanded and built upon in the future. While other games have to consider world consistency and make sure new areas fit together with the previous ones, I can easily see how NeocoreGames could just stick in a new star system with new maps and enemies and gameplay mechanics without too much trouble.

While the graphics are good and at times even impressive, the same cannot be said about the voice acting. It ranges from decent to downright terrible and it is abundantly clear that a lot of actors don’t use English as their first language. While that could be forgiven in a sci-fi game where strange dialects and accents can heighten the immersion, flat line reads without emotion or pathos are harder to come to grips with. Sadly, one of the playable characters is an example of this. The assassin’s voice was so bad that I almost immediately backed out and created a new crusader instead, since he at least gave the lines some emotional weight and believability and didn’t just read from a page like it’s a game from 1998. 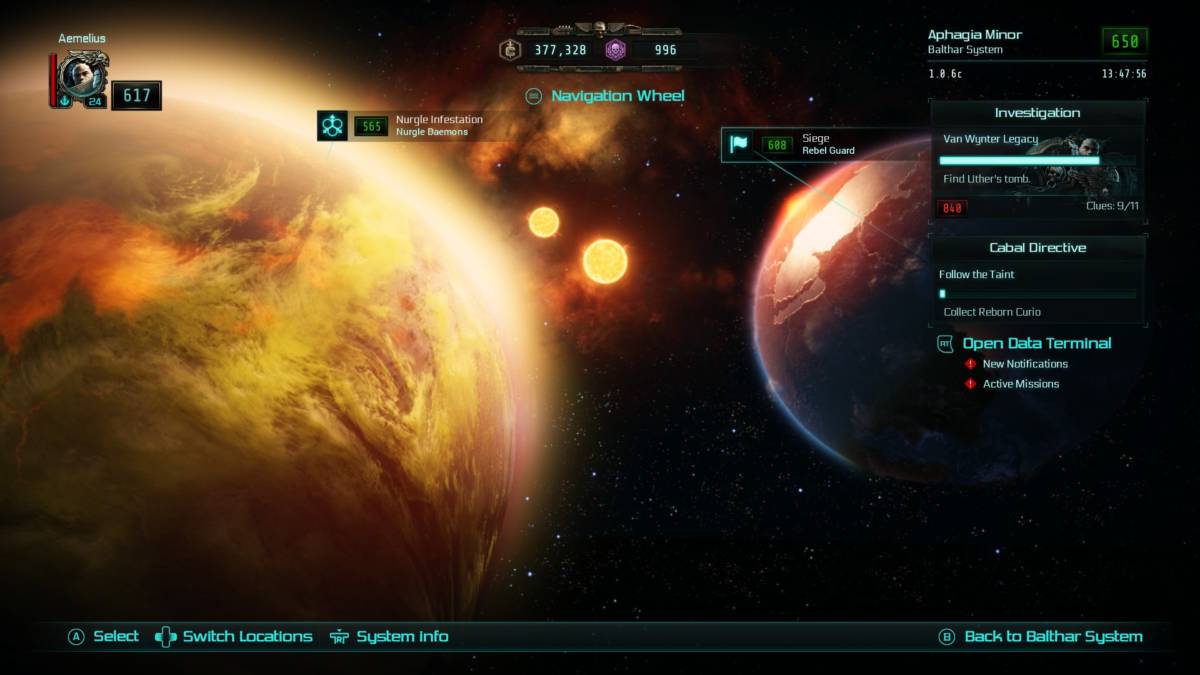 Though I played this on a PC, I feel that the gamepad support and controls works well enough for it to be highly enjoyable on a console. With the mouse, you have better precision in targeting and aiming sniper rifles but with the gamepad you can move around more easily and turning the camera is a lot smoother than with the mouse. Personally, I will probably stick with the mouse as it makes menus and inventory management a lot easier but it is good to know that the option exists for when I am playing on my Steam Link. The only thing that is irksome about it is that the game will not automatically switch between gamepad or keyboard support, which is a bit odd in this day and age.

Inquisitor- Martyr is a fun action RPG that is still a bit rough around the edges. Like many other games that spend time in Early Access, it was released slightly before all the pieces were firmly in place. A few weeks later and a lot of issues have been addressed, like missing sounds and sometimes being transported into some empty limbo map without any objectives to do or enemies to kill.

If you have friends who like the 40K universe and a good co-op game, Martyr is a no brainer. The game’s future is also looking very bright as the way it is structured lends itself to be easily expanded with new areas, enemies and weapon and I for one is holding out hope for the most 80s of all enemies, the Noise Marines. Make it happen, NeocoreGames.

Verdict
Martyr manages to breathe some much-needed fresh air into the action RPG genre. Microtransactions: none
8