10 Underrated May 2022 Comics You Should Read 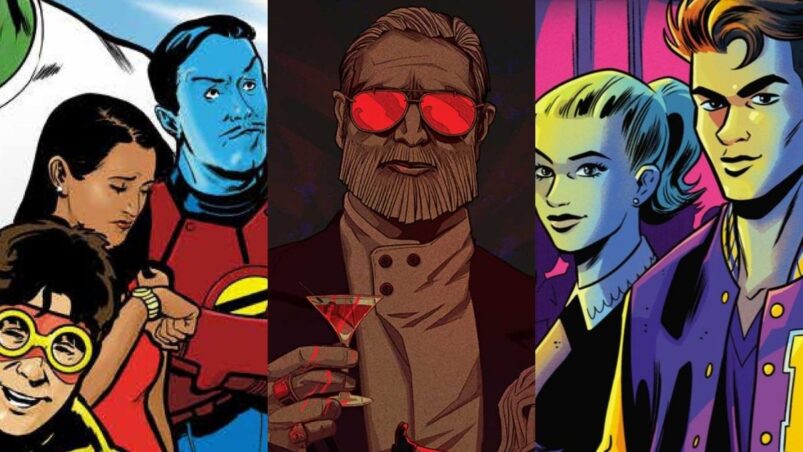 Historically, May is a month that always felt hopeful in the past. In the Northern Hemisphere, we anticipate the arrival of Summer and all its bright sensations. But it seemed like tragedy loomed over nearly every week in May this year (whether personally acknowledged or not). Fortunately, small joys in life help lighten the days. Comics are a bright spot for many.

If it seems like you keep having to add more new titles to your pull list every month, you’re not alone. Both the major comic publishers and indie comic scene alike have been putting out too many excellent titles to buy each month. Although you’re probably behind on reading already, here are 10 underrated May 2022 comics worth adding to the growing TBR pile on your bedside table.

Time Before Time, the time-jumping series from Image Comics has proven itself a groundbreaking entry into the sci-fi genre and the comics medium. 12 issues into the run, the comic has laid fertile ground for multiple future arcs that are just as compelling as the first.

Issue #12 takes a break from the primary storyline and functions as a slower-paced interlude issue. Still, the detective theme remains, with threads interwoven into the other issues to connect with the larger narrative. Time Before Time #12 focuses on FBI Agent Alex Sunap in the year 2141 as he searches for his missing partner.

The standalone issue features guest artist PJ Holden, whose style works phenomenally well with the narrative’s twisting routes. If you haven’t been reading Time Before Time, you’re missing out on a cutting-edge comic dedicated to craft and intrigue.

A cute coming-of-age tale, Kubo Won’t Let Me Be Invisible Vol. 1 from VIZ was released in May and it is a purely wholesome delight.

The story opens with protagonist Junta Shiraishi, a quiet student whose introverted nature causes him to blend into the background. Shiraishi has to stay after class every day merely to confirm his attendance to his teacher who failed to see him during the period. All his classmates barely register his near-invisible existence until Nagisa Kubo notices Shiraishi.

This first volume is lighthearted and nuanced as the chapters progress. Kubo’s adoring intensity and attachment to Shiraishi make her the perfect foil to the invisible boy unused to any attention. As Kubo pushes Shiraishi out of his comfort zone, his shadowy chibi appearance transforms to parallel his character development. Nene Yukimori has developed some heartwarming ideas here in this lovely manga story.

One of the more underrated May comic releases from AfterShock Comics, The Ocean Will Take Us #2 continues a vividly-illustrated teen horror story that should be on comic fans’ radar.

The comic series follows a group of teens in California obsessed with winning a spot on their nationally acclaimed high school swim team. Protagonists Piper and Casey join forces with other allies to take down the swim team and expose the star swimmers’ volcanic secrets.

Similar in tone and theme to Stranger Things, a disturbing evil lurks underneath the waves of this glamorous beach town. Issue #2 continues summoning those vibrant, sunset-soaked SoCal vibes with its clean linework and color palette while further hinting at the dark forces at play. The Ocean Will Take Us #2 combines mystery and quiet horror in spades, underpinned by aesthetically pleasing artistry.

Jonathan Hedrick and Stefano Cardoselli are two of my favorite comic creators who deserve as much recognition as any established creator. They are joined by the talented Jerome Gagnon and Cristian Docolomansky in their new slice-of-life one-shot comic set against a cyberpunk backdrop, Caffeinated Hearts.

Four separate vignettes intersect in the 24-page story taking place in a coffee shop. a 24-page slice-of-life one-shot comic book set in a coffee shop with a cyberpunk backdrop. Each vignette looks at the lives of different individuals who all find themselves in the same coffee shop.

Take a break from the world’s mayhem and grab a cup of java while reading the lovely Caffeinated Hearts one-shot to energize your soul.

One of my most anticipated releases of the year, Cat + Gamer Vol. 1 from Dark Horse Comics finally came to stores in May after several publishing delays. A gamer adopting a cat for the first time sounded like a perfect premise for a coming-of-age manga – and I wasn’t disappointed.

29-year-old office worker Riko is enigmatic and elusive. After work each day at 5 PM, she disappears without ever interacting with her co-workers after hours to go home and play video games. Her gaming obsession benefits her in the real world when Riko takes home a stray cat found in an office parking lot, who wants to play with her while she’s playing games.

Although she has never owned a cat before, Riko translates her video game knowledge into practical applications to try and connect with her new cat companion. Spare time is a gift. Cat + Gamer Vol. 1 shows how to navigate time management and the importance of devoting time to helpless animals.

Heroes and villains of equally divisive ethics and morally gray behaviors face off in My Bad. Supervillain Emperor King accidentally traps the wrong hero in his torture chamber of death meant for his archenemy, blue alien and fried-chicken franchise owner, The Accelerator. Meanwhile, rich Winthrop Lamps heir Jamington Winthrop, aka The Chandelier, uses questionable tactics when tracking down information about how Emperor King has supposedly uncovered his civilian identity.

My Bad is a callback to superhero comics and television adaptations of old. All the camp, old advertisements, and character pages crawl out of the woodworks in this witty comic trade. It’s your bad at this point if you haven’t read My Bad yet.

Archie and his friends have crossed over into parallel universes before, but the comic characters had yet to interact with their Riverdale counterparts officially.

Weighed down by the never-ending struggle of whether to ask Veronica or Betty to the school dance, Archie wishes for a way to fulfill both his desires. Meanwhile, in the grim and gritty Riverdale universe, their suave Archie randomly disappears. He lands in a Riverdale that’s not his own after a tectonic shift in the Archie multiverse starts to percolate.

The tone between the classic, feel-good Archie Comics and the seriousness of Riverdale drastically differ. The star-crossed comic intertwining their divergent universes tap into the inherent ridiculousness of both Archie iterations in a fun romp of a story.

Full of homages, references, and visits from some familiar faces, lively entertainment awaits inside the hilarious pages of Archie Meets Riverdale.

Both superhero satire May releases from AHOY Comics make this list simply because not enough people seem to talk about the inherent genius of these independent titles compared to the Big Two comics each month.

Set on Earth-Kappa in a universe where the ‘80s never ended, The Wrong Earth: Purple takes full advantage of the multiverse concept. Shiny spandex, Wall Street traders, and corruption dance around the streets in the nostalgic dimension.

From Fred Harper’s stunning, glossy visuals to the hard-hitting commentary on the darker side of the 1980s, I’d recommend reading this comic without even looking at the preview pages. The Wrong Earth: Purple makes a lasting impression. Unequivocally excellent in all regards, read this superb comic.

Part horror and part meditation on trauma, Image Comics’ Rain #5 wraps up the comic adaptation of Joe Hill’s novella and sticks the landing.

We readers send off a heartwrenching goodbye to this beautiful distillation of grief and love in this final issue. Honeysuckle’s companions have stuck with her every careful step of the way in her journey after the sky rained nails and killed her beloved girlfriend. As everyone looks for salvation from the impaling crystal rain, Honeysuckle searches for her own answers as the end of the world approaches.

Illustrated by the prestigious Zoe Thorgood, Rain is a comic series of sparse dialogue and quiet gestures. Rain #5 conjures a storm of emotions from its readers with its evenhanded ending. Here, readers experience catharsis from this elegant, touching ending to Honeysuckle’s story.

Published in May, the Eat the Rich trade collects all five issues of the ominous horror-thriller centered around wealth and healthcare from BOOM! Studios.

Ahead of law school, Joey hesitantly agrees to spend the summer with her anxiety-ridden boyfriend Astor and his family. When they arrive at Astor’s massive family estate, Joey is overwhelmed with fear over not living up to affluent etiquette and expectations. However, her trepidation only increases when she unearths the gruesome, cannibalistic secrets behind the families’ idyllic facade.

If you didn’t have a chance to read the single issues of this series, the Eat the Rich trade paperback lets you attack the whole sizzling story in one bite. Both the relevant narrative and atmospheric illustrations stimulate the sense of horror encompassing the comic. This underrated comic is a topical horror story for the modern era dripping with appeal – and blood.