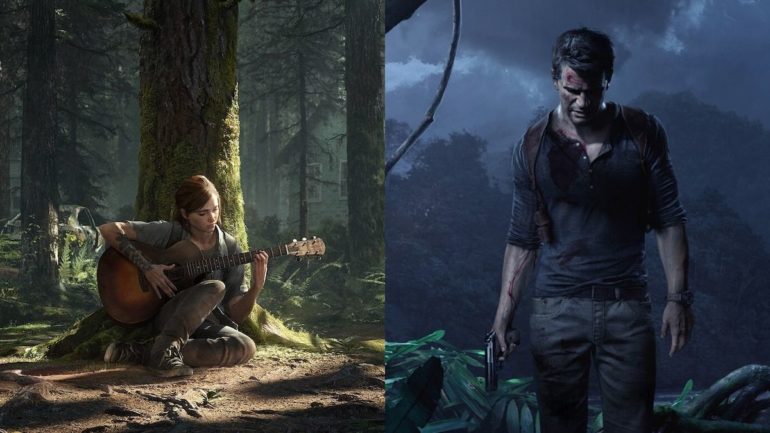 Big spoilers for The Last of Us Part II follow.

Released in 2016, Uncharted 4: A Thief’s End is the culmination of Nathan Drake’s story, it being one of the most revered games of all time that also closes the book on one of the most lovable mass murderers of all time. As well as that, though, it also seems like it sets up the events of The Last of Us Part II.

In the epilogue of the game, you can find a poster that seems to tie in to the The Last of Us universe, as well as hints at the setup for the second game.

Neil Druckmann is, of course, the brainchild of The Last of Us alongside Bruce Straley, and also the director of Uncharted 4, again alongside Straley. It’s not a stretch at all to suggest that they were planting the seeds long before the game’s announcement.

The figure on the front cover, a pregnant woman wearing a mask with a gun, is up for debate. Some believe it’s Ellie’s mother, but it’s hard to tell. While this character doesn’t really seem to fit into The Last of Us Part II, that subtitle sure does.

‘American Daughters’ may well be referring to both Ellie and Abby, the two main characters you play as in the sequel. Ellie is the closest thing to a daughter Joel, the main character of the original game, has known since the death of his daughter, while Abby’s father was an important part of the Fireflies.

The Last of Us Part II is a game all about daughters and the impact of losing your father. Joel killed Abby’s father to save Ellie, and then Abby returns the favour to Ellie’s surrogate father early on in the second game.

From there, it becomes a tale of daughters twisted by loss, both stuck in an almost hopeless cycle of violence. While the overall story of The Last of Us Part II might not be that well received, this easter egg seems to show the plan all along.

READ NEXT: The Last of Us Part II: How To Find The PlayStation 3