Twitch Plays Pokemon To the End 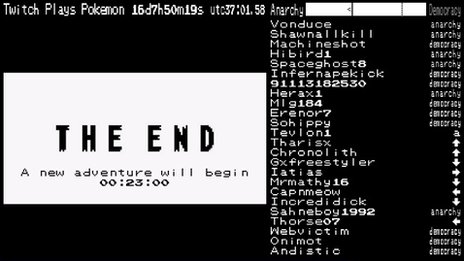 Two and a half weeks ago the internet collectively let out a mild chuckle at the sight of about 40 people all shambolically attempting to play the same game of Pokémon Red via chat room inputs on twitch.tv. The experiment was dubbed ‘Twitch Plays Pokémon’ and after the initial news broke many people forgot about it. They really ought not to have done as in the time since then, the amount of active plays ballooned to upwards of 100,000, the viewership soared past 30 million and at around 9am GMT on Saturday, they only went and beat the bloody game. Literally hundreds of thousands of people all inputting one button commands to control the same character; by all rights it should have failed before it had even started but somehow these devoted/crazed individuals became 2014’s equivalent of the Little Engine That Could, except real and with 100% more Venomoth. 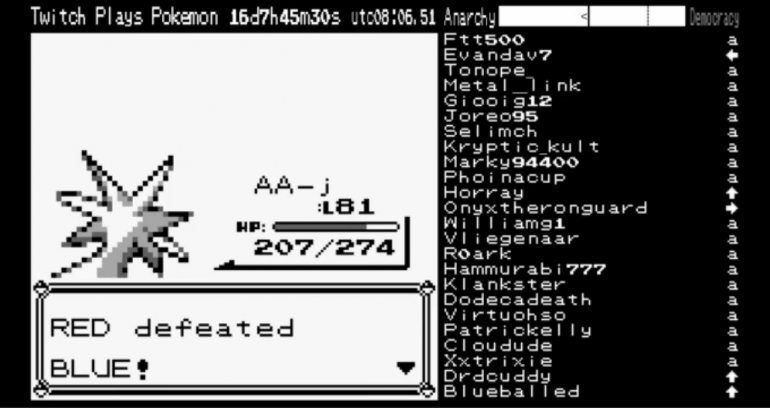 The way it worked was fairly simplistic: you would input a button command (a, b, up, down, left, right or start) and after a short delay it would translate into the game. The immediate assumption is that the more people, the less likely this would be to actually result in progress. Admittedly, said progress took time and the means by which it was achieved has been likened to the ‘infinite monkey cage’ theory, famously riffed by Mr. Burns. Essentially, with enough people mired in the chaos all trying to do the same thing, it’ll happen eventually.

Another comparison that came up was a message in a bottle, it’ll get swept around a lot but ultimately the current will take it to shore and so it was with this. If you tuned in for 5 minutes you’d likely be treated to footage of Red walking around in circles, repeatedly scrolling through items and occasionally saving the game. The actual structure of Pokémon actually kind of helped with that though, constant aimless wandering lead to a lot of time spent in the long-grass, which meant wild Pokémon and without easy access to the ‘run’ command that meant an awful lot of accidental grinding. By the time they reached the elite 4 this mass of sleep deprived lunatics were equipped with a level 69 Pidgeot, a level 80 Zapdos and a level 52 Omastar, among others. 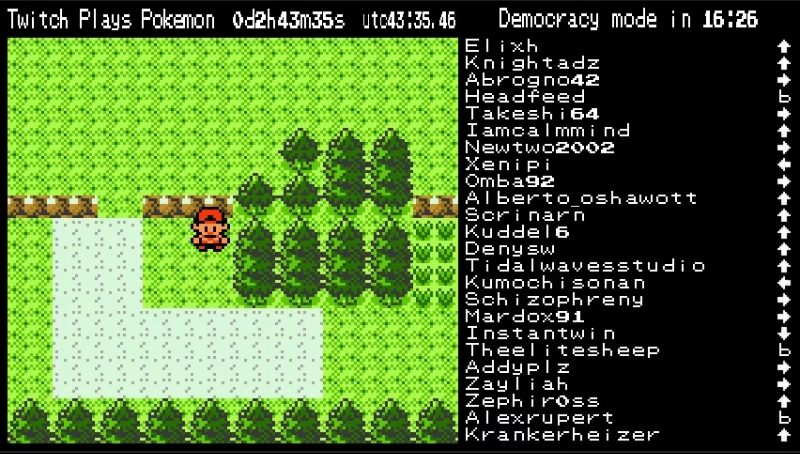 There were setbacks though, some fairly massive ones. For all the advantagse of time spent grinding away to level up, the control interface was a hellish curse whenever a PC became involved. Reason being that as well as storing Pokémon, the PCs in the game are also the only means by which you can release them and numerous party members ending up suffering this cruel fate, the better part of the 12th day (dubbed ‘Bloody Sunday’) was spent trapped in a vicious cycle of PC masochism that almost saw the invaluable Pidgeot (nicknamed ‘Bird Jesus’) getting released. Other issues included a period of many hours attempting to negotiate a particularly troubling series of ledges and the tooth grating moment when the players inadvertently dug their way out of Giovanni’s office.

Amidst the adversity there were also some utterly mind-blowing moments of prevailing improbability (putting aside the fact that they ACTUALLY FINISHED IT), catching Zapdos, making it past the infuriating ‘bin puzzle’ in the 3rd gym with phenomenal ease (it usually takes one player longer than it took them to do it) and the against-all-odds defeat of Dragonite by a Venomoth more than 20 levels lower using only poison damage and the highly ineffective ‘leech life’ attack (all thanks to an amusing loophole that had the Dragonite fighting back with nothing but defensive moves). 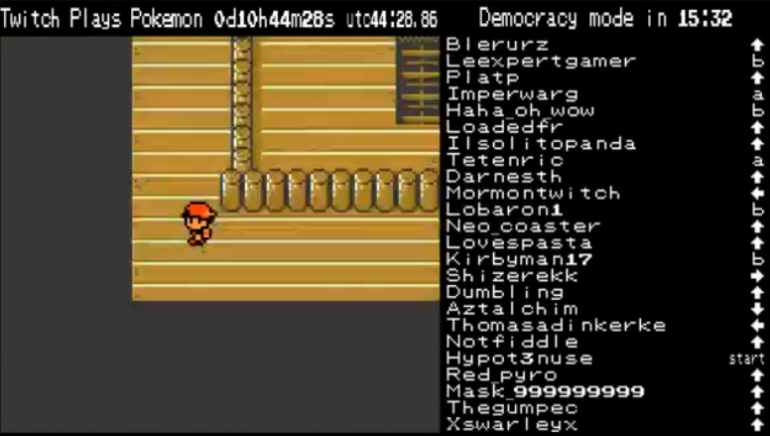 The utterly surreal nature of Twitch plays Pokémon did more than just pull in more players though, once the Reddit community got hold of it, a sprawling narrative emerged, taking the seemingly random nature of events and providing them with a substantial backstory that played out like some ancient, epic, Olympian drama. Pidgeot became Bird Jesus, the Helix Fossil (an item that Red repeatedly tried to select from the menu even though it was does nothing) was deified and later ‘rose’ and a Flareon was branded a ‘false prophet’ and blamed for almost everything that went wrong. You could be forgiven for thinking the entire endeavor was an arbitrary waste of time that ultimately didn’t prove anything but compulsion rarely comes without substance and Twitch Plays Pokémon had compulsion in spades. Normally simple tasks ballooned into Herculean challenges and pivotal battles were racked with tension. I found it most interesting as a social experiment, an example of a legitimate hive-mind, the most complicated, longest Mexican wave ever. The action has since moved on to Pokémon Crystal and with six more games left to cover this phenomenon doesn’t show signs of slowing down any time soon. Will the magic of the first play through ever be replicated? Unlikely, but as long as it continues, Pokémon can continue to enjoy the most compelling narrative it’s ever had (sorry Ash, hindsight is a harsh mistress).