The lovable ne'er-do-wells making the leap to cartoon form causes as many problems as it solves. 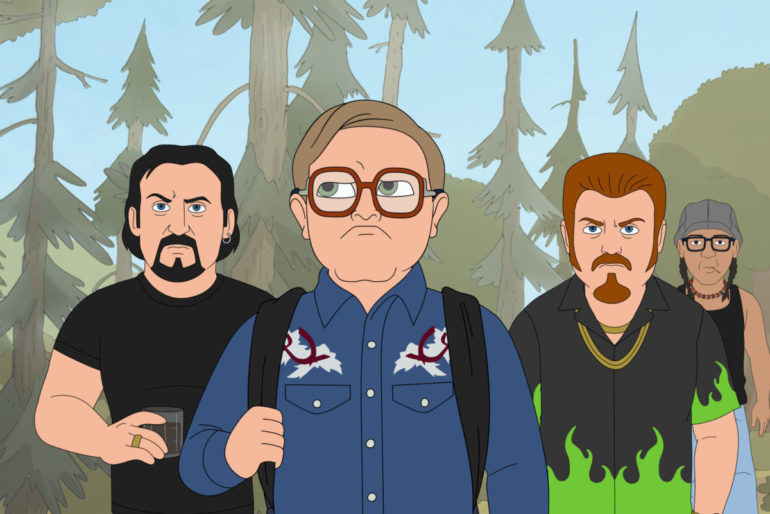 Just when you thought that Trailer Park Boys couldn’t get any more more ridiculous, it goes ahead and releases a spin off series where all the classic characters of Sunnyvale trailer park are recreated in animated form. Even though season twelve ended with the guys turning into an animation after taking a serious amount of magic mushrooms, I was under the impression that the show would call it a day at that point. This was mainly due to the fact that John Dunsworth who plays Jim Lahey unfortunately passed away during filming of season twelve, hence why the last part of the final episode was transformed into an animation.

But Trailer Park Boys has managed to get over that particular hurdle. By making the show into an animation, it can skirt the issue of John Dunsworth’s absence by presenting him as an animated character with select dialogue that is comprised of old pieces of speech the actor used throughout the previous seasons of the show. At first it does seem like perhaps someone else is doing a very good impression of Jim Lahey, and because he only pops up now and again, it isn’t obvious unless you pay close attention that it’s definitely Dunsworth’s voice they’re using.

In Trailer Park Boys: The Animated Series, everything being animated is put down to the guys having taken a very large dose of mushrooms, and now see the world around them as a cartoon. It is ludicrous, bizarre, and highly entertaining to watch – and sort of makes sense, in so much as nothing has really made any sense in the last twelve seasons. Initially, the boys are freaked out by the fact that they are walking cartoons but not long into the first episode, they grow to accept their new forms and return to what they do best. This is mainly getting high, getting drunk, coming up with a hare brained scheme and then proceeding to fuck up said scheme and running afoul of the law.

It treads familiar ground to its previous incarnations, and there are a few points where the season drags a little from a reliance on the same gags. However, there is something satisfying about the ridiculous running jokes they have implemented since the start. One of the best examples being the fact that Julian (John Paul Tremblay) always has a glass of rum and coke in his hand, no matter what situation he is in. This plays into the animated format very well – the episode ‘Space Weed’ is a prime example, where we see Julian’s drink float out of his glass in zero gravity.

There is a great novelty about the animated series of Trailer Park Boys, and I spent much of the opening half of the season extremely entertained watching the various animated versions of the beloved bizarre characters of Sunnyvale Park making an appearance. The conversion from real actors to animation is strangely seamless, as many of the characters in the original show are so absurd and larger than life that they fit quite nicely into cartoon form. The humour and situations have also been previously quite wacky and in some instances surreal, so putting it in an animated format gives it the feel of such classic cartoon comedies as South Park.

The animated format of this series opens up a number of new possibilities for Trailer Park Boys. For example crazy, out of control situations can be propelled to even more ridiculous heights, as cartoon doesn’t have the same limitations as using real actors and locations. The Space Weed and Hurricane Ricky episodes are the most obvious examples of where Trailer Park Boys has been able to bring in utterly insane scenarios without restrictions or limits. The best advantage of using animation to approach things in a different way is in the episode where Bubbles (Mike Smith) recalls the first time he met Julian and Ricky (Robb Wells) when they were still children. Because it is animated, they don’t have to worry about finding child actors to play them, and can simply voice smaller versions of themselves. Also it includes the funniest section with Ricky as a child where his speech is even more absurd and hardly makes sense to anyone including himself.

Unfortunately there are a few downsides to the series. The decision to have an animated Mr. Lahey with prerecorded lines, presented as the spirit of the liquor, is initially very amusing. But the actor’s physical absence is noticeable, and although their efforts are admirable, it does feel like the season is lacking the presence of such a strong performance. Despite the main focus being primarily on Julian, Ricky, and Bubbles, Mr. Lahey was such a funny and entertaining character that reducing him to a bit part with reused lines of dialogue just doesn’t quite cut the mustard. It is a cop out move on their part, as it results in them regurgitating the same punchlines, relying too much on the animation side of things to add anything new or different.

Additionally, the grossness and violence of this season is particularly noticeable, to the point that it can be a little off-putting. Trailer Park Boys has always had moments which are in extremely bad taste, but because this season is animated it’s able to go one step further and, if I’m being completely honest, this is to its own detriment. Moments of bad taste can be overlooked and in some instances admittedly amusing but it seems that it is used gratuitously in this season. Falling into the classic trope of adult animations with its over-propensity for violence and gross moments, I did find myself losing a certain level of interest in the show.

Trailer Park Boys: The Animated Series has some neat little tricks up its sleeve and some of the scenarios and situations work particularly well in the animation format. The majority of the season is very funny and the chemistry between Bubbles, Julian, and Ricky continues to drive the show forward, offering some great instances of dialogue and hilarious one liners. It doesn’t quite live up to the standards of previous seasons, as the gross and violent additions are far too frequent and disturbing. Also the lack of John Dunsworth is much too apparent, making it feel very much like there is a significant presence missing from the show.

Additionally, it feels like it has sort of drifted away from what was the initial appeal of Trailer Park Boys. The low budget, rough-edged style hasn’t really been replicated in the animation, which is a shame. The content is still funny, but the joy of seeing Robb Wells in the flesh slipping and falling over simply doesn’t carry over to this series. The humorous dialogue and ridiculous situations work perfectly fine in animation, but the physicality of the piece definitely suffers. It doesn’t seem able to catch certain moments that only succeed with real actors, such as Mike Smith, Robb Wells, and John Dunsworth, who pull the absolute best faces and expressions throughout the previous twelve seasons. The novelty of the animation is appreciated but it doesn’t manage to entirely replicate the performances fans have come to know and love. 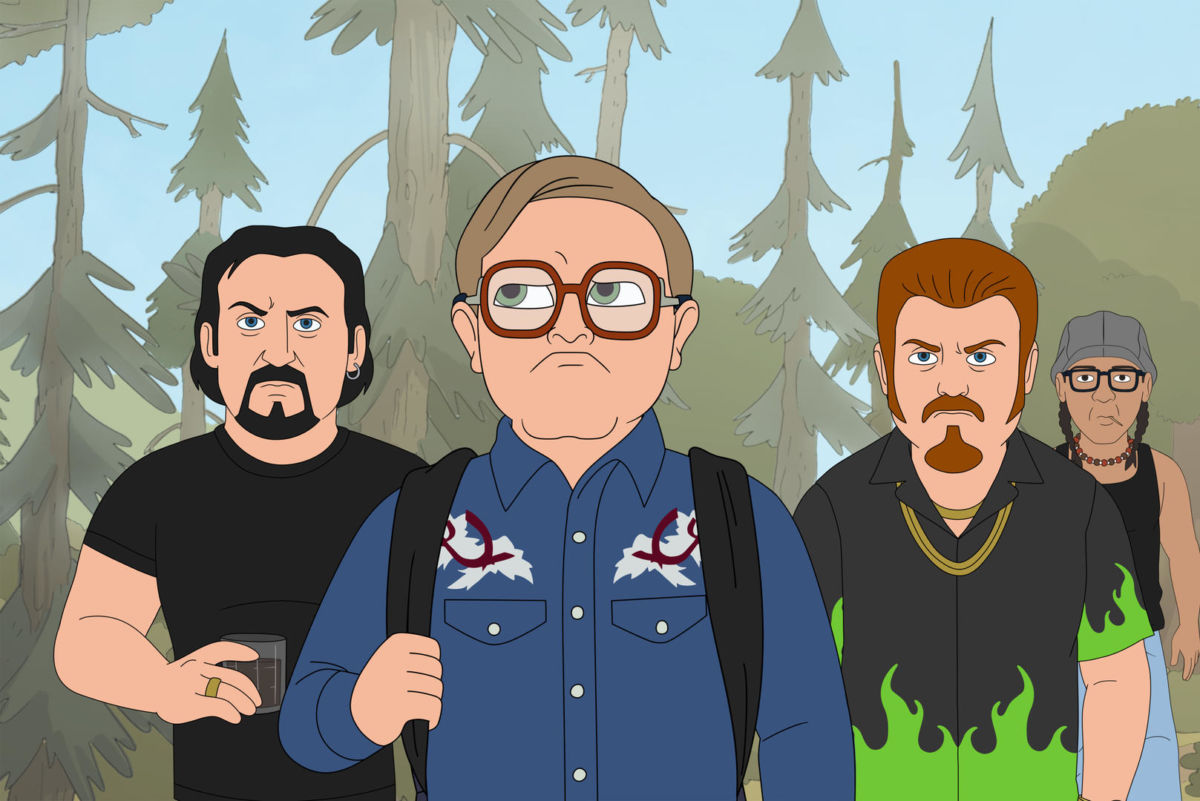 Verdict
Trailer Park Boys The Animated Series utilizes its cartoon format in a handful of successful ways but it doesn't manage to hold a candle to its live action predecessor.
7
Cultured Vultures is a pop culture website established in 2013 covering all things gaming, movies, and more. We eat your words.
All The News On The Biggest Games