What Tiny Tina’s Wonderlands Must Do Differently

We have some tiny requests. 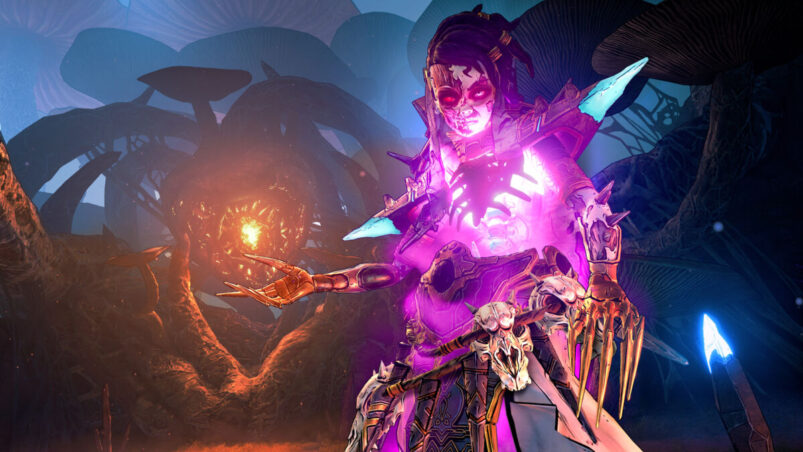 Gearbox’s next entry in the greater Borderlands canon, Tiny Tina’s Wonderlands, is nearly here. The community has been buzzing with excitement over this new spinoff that blends high-fantasy with the comical ridiculousness that Borderlands has been known for all these years. While it may look unique enough on the outside from previous Borderlands entries, would that be enough to satisfy Borderlands fans looking for something new?

Borderlands 3 changed up a lot of the basic formulas of the gameplay to make things much more unique than before, representing a massive shift in what makes Borderlands stand out. From introducing classes that could equip multiple action skills to new equipment slots that opened up build variety to a level not seen before, the fourth and now most robust mainline Borderlands to date has set the bar on what should be improved upon or changed.

How could Wonderlands differentiate itself enough to seem like a title that stands on its own and not another Borderlands copy and paste job with dragons instead of robots?

Even if Borderlands advertises a game with literally billions of guns, that doesn’t mean they all seem different. The pool of weapon archetypes in reality feels small until options begin to open up to the special Anointing effects where stats affect your class’ specific abilities, or general effects like when your class ability expires. However, most guns can be broken up into only a handful of archetypes and general categories within their manufacturers. This obviously creates a sometimes very homogenous spread of equipment across the game at large, and only Legendary weapons express the largest amount of variety in terms of how items behave uniquely.

Wonderlands is hoping to change things up a little bit by changing two equipment slots on your character. Class Mods and Artifacts have been thrown out in favor of Rings and Amulets. Described by Gearbox Software on the official Wonderlands website, Rings and Amulets are essential pieces of armor that enhance your Fatemaker’s build with a variety of impactful effects, buffs, and stat increases. The most noteworthy change is that players will be able to equip two rings and one amulet, effectively adding a new equipment slot as a whole. Rings won’t be providing as many special effects like Legendary items would, instead offering more simplistic flat boosts to stats such as Action Skill duration or ammo capacity for specific weapon types.

While not entirely specific on if Legendary type Rings exist, there is room in the official descriptions that they could. Adding Legendary effects to an equipment slot like a Ring can be an easy way to boost the variety of equipment and allow for classes to shine by augmenting abilities in this slot.

Blizzard’s World of Warcraft did this to great effect with rings that boosted specific class abilities or a set of two rings that would offer bonuses if they were equipped together, freeing up more varied effects to belong on weapons, amulets, or armor pieces. Moving bonuses away from abilities and towards items can be a hard balance to strike, as it could result in a homogenous endgame where only specific items are a must rather than consideration towards a few choice skills.

In Wonderlands, Gearbox could take inspiration from this and have various Legendary item sets that require multiple pieces to gain the largest effect.

Balance the Game Across All Levels

Borderlands 3’s greatest weakness is a sense of proper balance, and really several Borderlands games suffer from this issue.

Early on, sometimes certain items and skills outperform everything else and you can feel like nothing else can equal out until much, much later. Difficulty has peaks and valleys throughout and sometimes even the toughest activities can feel trivial with either a certain build at the start or at the highest level of play.

Borderlands 3’s items, skill trees, and even the Mayhem Mode modifications did not follow what’s referred to as a “stair step” tier breakdown of levels. Instead, at times the difficulty would be all over the place depending on encounters, builds, and even which Mayhem Mode tier you were on. Despite when Gearbox deployed patches to change certain items, encounters, and abilities, these changes could greatly affect the entire game in the worst ways possible.

Wonderlands greatly needs to address balance by taking into account a much more careful approach to the power and difficulty curve. Making sure there is a clear tiering of power as players progress to the highest base level and then players entering the endgame loop would have much more freedom to build their character, instead putting stronger emphasis on theorycrafting and build variety where the Borderlands community enjoys their time the most.

Have a Beefier Endgame Loop

This is the largest chink in Borderlands’ armor that has never been properly addressed for the entire existence of the franchise. When players are done completing runs of the main campaign, activity variety becomes very limited. You can either find bosses that respawn, do some side-quests, or maybe participate in the live holiday event if you’re playing Borderlands 3. That’s it.

Other loot-centric games like Diablo 3, Outriders, and Destiny all feature a “post-game” loop of activities players can participate in that don’t involve reruns of the campaign or resetting your progress. Instead, players are introduced to a new loop of rewards and a tiered difficulty structure that can be scaled dynamically or on-demand that increases rewards, enemy variety, and sometimes entirely different experiences.

This lack of a post-game loop has always been a massive weakness when competitors in similar games have the right idea of how to treat the endgame. Blizzard in the past addressed this in a very unique manner by introducing Adventure Mode to Diablo 3 with 2014’s Reaper of Souls expansion. By reusing the open world with a “radiant” quest system that added objectives to the map in different locations, players would work up to a final encounter with a unique boss at the end of a string of quests. With Wonderlands’ world map functioning like a board game, roguelike elements can shine, especially with a randomized system to determine paths, locales, and quests placed across the board after the main campaign is finished.

Another example of where to take the endgame is People Can Fly’s Outriders. Instead of just retreading the same content, a whole new map is introduced along with a long-term activity path called “Expeditions,” which was a long-term endgame activity siloed off from the rest of the game only available after completing the main campaign.

With its Dungeons & Dragons inspirations, Wonderlands can benefit from introducing players to an endgame loop where buildcrafting and equipment become the mainstay of streaming and hardcore players alike; giving the game depth where it’s needed most can add longevity without a constant DLC cycle where one-off campaigns are added. A true endgame loop allows for the most growth beyond farming quests and bosses and it gives the game a lot of room to breathe at the pinnacle level without sacrificing breadth of content. In its current state, Borderlands 3 mainly relies on gear thresholds and builds to overcome challenges at its top levels. Along with the Mayhem Mode modifiers seen in Borderlands 3, formerly known as OP Levels in Borderlands 2, a true endgame loop would provide a lot of longevity where it’s needed the most.

Wonderlands is already looking like a solid entry into the Borderlands franchise, even if it’s clear that Gearbox wants this game to stand on its own, rather than be considered a direct relative of their most popular franchise. Changes like greater class variety, more unique weapons, and even world traversal are already looking like positive upticks compared to before. Will Gearbox deliver? We’ll find out this coming March.