Where To Start With Reading The Wrong Earth 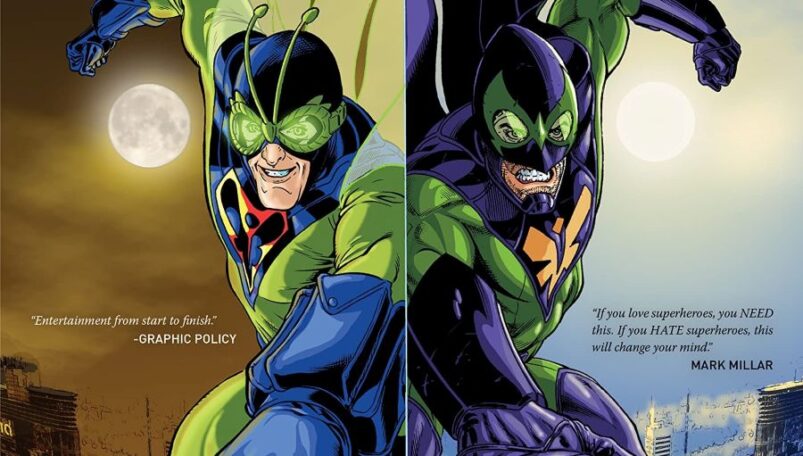 AHOY Comics launched their first wave of comic titles back in 2018. The Wrong Earth (2018-) and High Heaven (2018-2019) were the debut comic entries from the publisher. Initially, The Wrong Earth began as a limited miniseries. The comic tells a meta-story about two superheroes from parallel universes who become trapped in each other’s worlds. With one Earth saturated with campy dialogue and cotton-candy colours and the other a grim metropolis where blood runs down the noir-tinged streets, Dragonflyman and Dragonfly fight to escape their wrong Earths.

After several iterations including a sequel series, a prequel series, and an upcoming one-shot crossover event series, readers who want to break through the mirror and enter The Wrong Earth comic universe may find themselves in need of guidance. The following piece breaks down a reading guide for The Wrong Earth to help you figure out where to start. A short synopsis for each book will give you a sense of the chronological timeline, the multi-dimensional characters, and what to expect narratively in lieu of the latest addition to The Wrong Earth comic canon.

The first six issues satarizing and paying homage to the comic industry’s superhero Silver Age were collected into a trade titled The Wrong Earth Vol. 1 during the year 2019. Nearly 200 pages, the volume not only included the original comic run but reprinted the backup mini-comics from the single issues. Written by Paul Constant and illustrated by Gary Erskine or Frank Cammuso respectively, these “Tales of the Wrong Earth” comic one-shots solely focusing on one character each expanded The Wrong Earth universe – and made a nice addition to the trade.

On the sunlit, neon-coloured Earth-Alpha, Dragonflyman and his trusty sidekick Stinger live in a world of binaries. The superheroes fight the bad guys, escaping traps using convenient gadgets and foiling their enemies after lecturing the villains with kitschy soliloquies straight out of the 1966 Batman television show. Good wins over evil.

Meanwhile, on Earth-Omega, the hardboiled Dragonfly employs violence and fire to hurt or even murder his combatants. Dragonfly is a costumed vigilante pursuing justice against sadistic criminals at any cost. During a confrontation with the two heroes’ archnemesis (Number One), both the superheroes and both the alternate reality Number Ones are sent to each others’ respective universes through a mirror with no way home.

The Wrong Earth Vol. 1 sets the stage for the best superhero satire you’ll ever read. Dragonflyman’s vivid costuming and cliched speech stands in stark contrast with the bold, cinematic grittiness on Earth-Omega. Contrastingly, humour abounds as the murderous Dragonfly, haunted by a death, finds a shining world which celebrates him as a hero and not a menace. Other important characters include Earth Alpha’s Chip Andrews (codename: Stinger), Earth-Omega’s bloodletting victim, Earth-Alpha’s flamboyant Number One enemy, Earth-Omega terrifying anarchist version of Number One, and Deuce, the right-hand-woman to Earth-Alpha’s Number One.

Anyone who read the final issue, The Wrong Earth #6, most likely yelled “Leapin’ Lizards!” after confronting the cliff-hanger ending. Although no promises were made, the creators intentionally dangled that loose end at its readers like a tantalising dessert. Then, AHOY released a five-issue prequel series from November 2019 to March 2020. Simply named Dragonfly and Dragonflyman, the comic series jumps back in time and denotes the two superheroes’ origin stories. The final issue hit comic stands exactly when the global pandemic hit the world.

Here, the backstory behind Earth-Omega’s Chip Andrews is revealed. Dragonflyman on Earth-Alpha finds himself hypnotized, turning against his faithful sidekick. The Wrong Earth creators also conjure a new character to join the action-packed excitement: Lady Dragonfly. Artist Peter Krause takes on illustrative duties with sharpness and poise in this prequel edition.

Somehow, AHOY Comics kept chugging along with the rest of the comic book industry during the pandemic. Like other publishers, AHOY accompanied readers by releasing their comic issues digitally. Eventually, comic stores re-opened their doors. And in January 2021, after nearly two years, readers received a late holiday gift in the form of the long-awaited follow-up to The Wrong Earth. The six-issue sequel brings back artist Jamal Igle for The Wrong Earth Vol. 2: Night & Day and continues the original story. Night & Day capitalises on that delightful bombshell revelation from the series’ flagship title and runs the multiverse/parallel universe narrative gamut.

The Wrong Earth: Night & Day contains major spoilers if you haven’t read Vol. 1. Essentially, the multiverse has more surprises in store for the Dragonfly heroes after they have spent a good portion of time in their alternate dimensions. Then, a new development thrusts the heroes together for a team-up on yet another wrong Earth. The story further examines the fascinating psychological and sociological impact living in an alternate universe takes on The Wrong Earth characters.

Beginning in March 2022, The Wrong Earth series will parody the DC comic book Crisis on Infinite Earths event. One-shot stories occurring in The Wrong Earth universe centre on the titular characters as they crossover to even more multiverse realities. Five standalone specials can be read in any order after their release. The series guarantees signature AHOY laughs, more hilarious satire in the vein of both superhero parodies and Archie Comics crossover stories, and boasts a slew of comic book creator titans and AHOY creators.

The Wrong Earth: Trapped on Teen Planet #1, written by industry veteran Gail Simone and illustrated by Bill Morrison, Walter Geovani, and Rob Lean, will launch the series beginning on March 2, 2022. The other four one-shot issues, Fame and Fortune #1, Purple #1, Confidence Men #1, and Meat #1, are slated for a subsequent monthly release schedule through July. Preview pages and solicit information can be found here at IGN.