The Sinking City (Xbox One) REVIEW – The Wrong Kind Of Nightmare 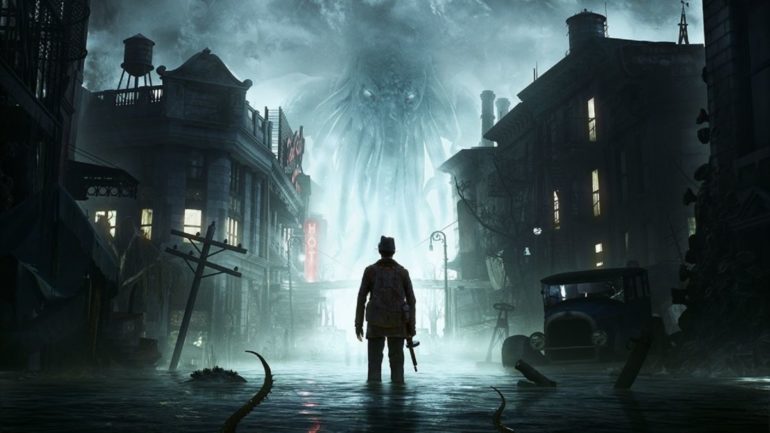 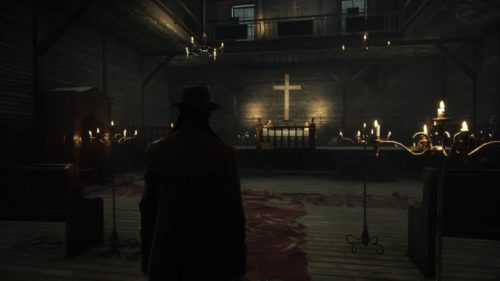 With more money going into testing and quality assurance, games this gen have had a larger focus on polish, especially those with a full price tag. So when a game as unique and interesting as The Sinking City launches with framerate issues, screen tearing, and glitches abound, it’s hard not to feel disappointed and sorry for Frogwares as their promising reimagining of Lovecraft’s work is bogged down by such glaring technical issues.

Oakmont, the titular sinking city, is a small, xenophobic burg of Massachusetts where madness flows as freely as water. Reports of insanity abound as, Charles Reed, a Private Eye from Boston, makes the pilgrimage to investigate the cause of these reports, and how they could relate to his own horrific visions. From there, the story seems to directly stem from “The Shadow Over Innsmouth” (the same novella Call of Cthulhu: Dark Corners of the Earth drew its inspiration from), complete with the unusual fish people and touchy race relations. This isn’t a bad thing. In fact, it’s the premise most Dark Corners of the Earth fans were expecting from last year’s Call of Cthulhu: The Official Game. 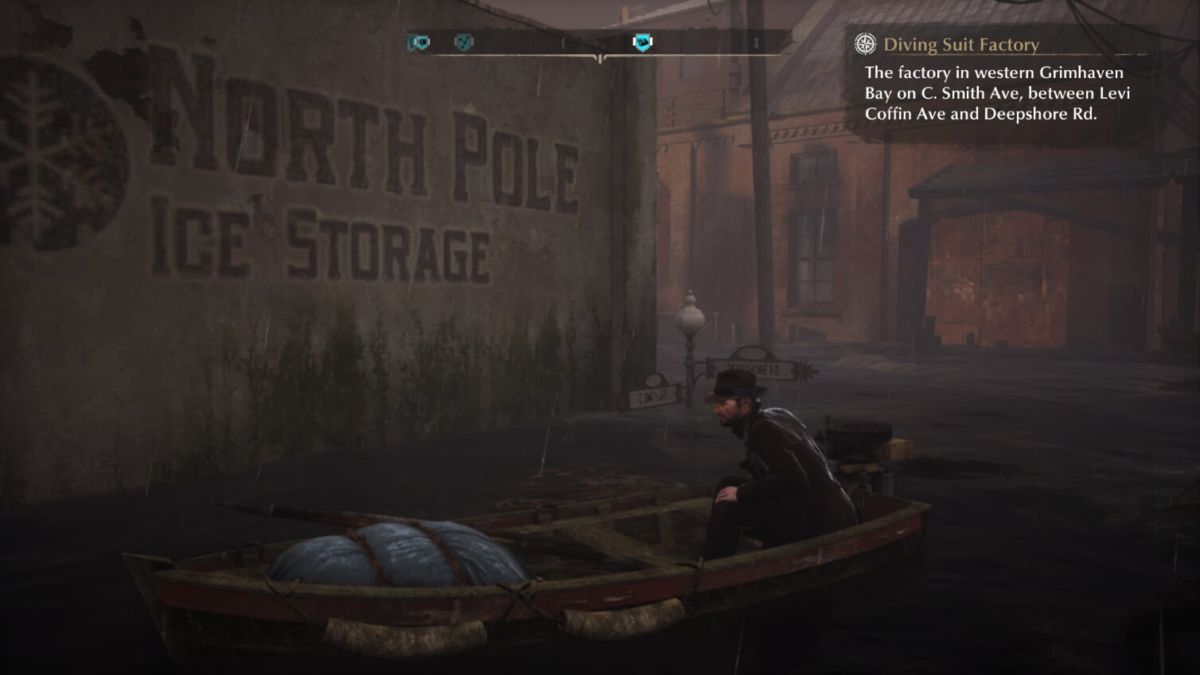 After a celebrated history of making fun, intriguing, and albeit equally sketchy Sherlock Holmes games, Frogwares’ attempt at Lovecraft’s nearly century-old story promised to be something to take notice of. For the first time, they would develop a full open world to sleuth through with an integrated combat/stealth system and side-quests to pursue. Sadly, most of these features turned out to be half-truths.

The open world, while atmospheric and graphically pleasing most of the time, isn’t much more than copy and pasted buildings with a few key locations sprinkled throughout. It seemed every other shop sold “Boots n’ Shoes.” Nothing really interacts with Reed, either — aside from floating barrels in the flooded streets, any sign of physics on land is non-existent. Lighting isn’t bad, but it’s certainly one note as 90% of the game takes place in the rain. The seamless transitions to interiors are a neat addition (although less seamless when you move too fast for them to load), but much like the exteriors, they too are copied and repeated. Once the game has cycled through its 4 or 5 interior layouts, exploration begins to feel cheap as you simply recognize which layout you’re in and loot it as usual. 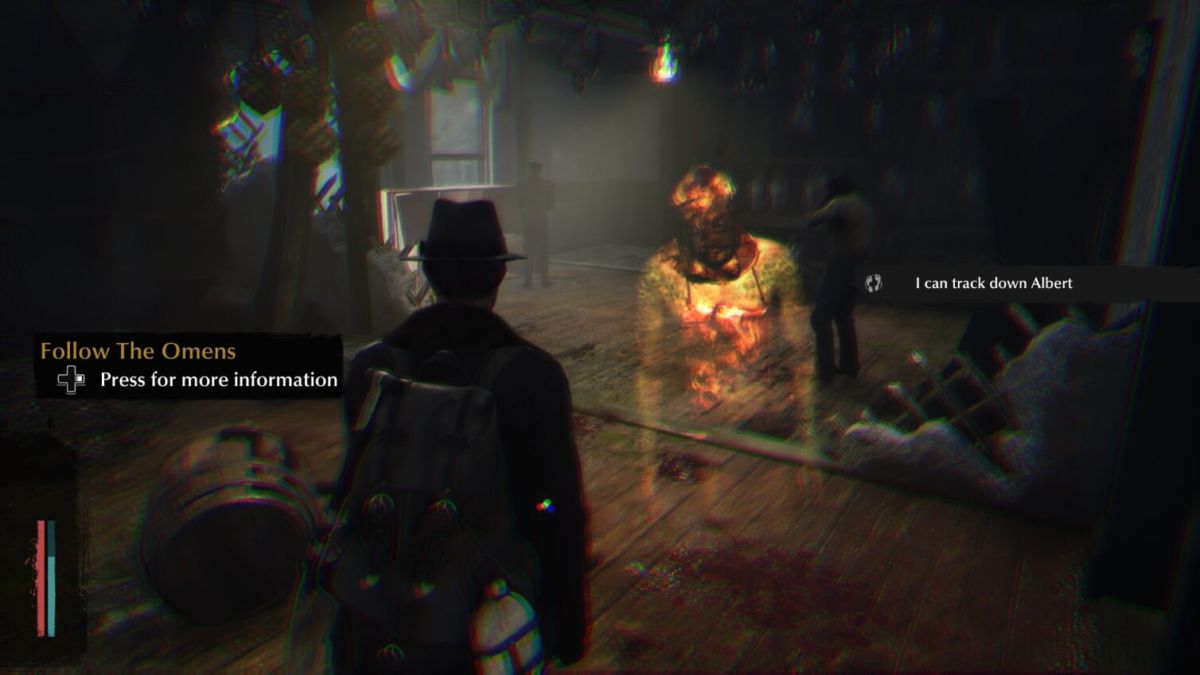 Combat is a mess. While the Holmes games had light combat sections that rarely outstayed their welcome, The Sinking City makes it a point to spring enemies on you wherever it’s least convenient. Whether infesting a primary route to your objective, spawning out of the ground once you enter a small house, or interrupting your crime scene investigations, the enemies add almost nothing to the overall experience aside from the casual annoyance. Add to this that you are weak, enemies are strong, and ammo is scarce, and it wasn’t long before I found myself turning the combat difficulty down to make these encounters less tedious. Stealth was consistently presented as an option in the loading screens as well, but aside from a few home layouts that let you sneak in and sneak out, it’s absolutely awful in practice. You can either kill all the enemies or run.

Side-quests seem to be the only fully fleshed out addition to the formula, despite their scarcity, and thankfully they’re designed just as intently as primary cases. Character threads are easily followed, your investigative abilities are well utilized, and in the end, you’re rewarded with a nifty costume and usually some hefty extension to the leagues-deep lore. 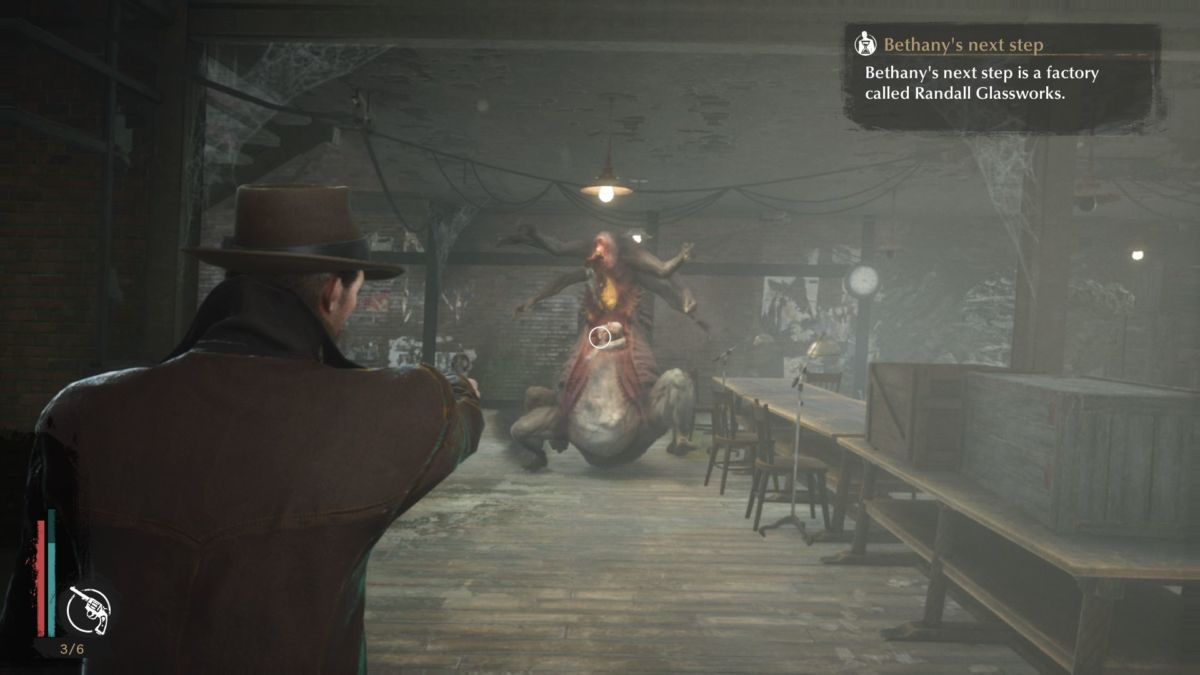 Undeniably, the greatest thing about the Sherlock games, and now The Sinking City, is its unique investigation system. While other detective and mystery games like to hold your hand between each setpiece or crime scene, the open world is set up for you to explore. There aren’t any waypoints, as the game expects you to mark the map yourself as you investigate. Archives located in the police station, St. Mary’s Hospital, Oakmont City Hall, and other key facilities are crucial to investigating, as they’re usually where you can cross-reference evidence with addresses to mark your next destination. I’d recommend unlocking their fast travel locations as early as possible for ease of use.

And in case Frogwares fans were worried, the Sinking City also maintains the deduction mechanic that the Sherlock house was built on. Rather than collecting evidence and being told the flat-out truth, you must determine what is true among the facts. This includes but is nowhere near limited to: deciding if someone’s actions were malicious or innocent; determining the outcome of a Dagonic ritual based on previous attempts, or even resorting to framing someone purely because he acted like a dick that one time. You’re given executive authority over the entire investigation: Your conclusions have consequences on the story, and rarely does the game insult your intelligence. 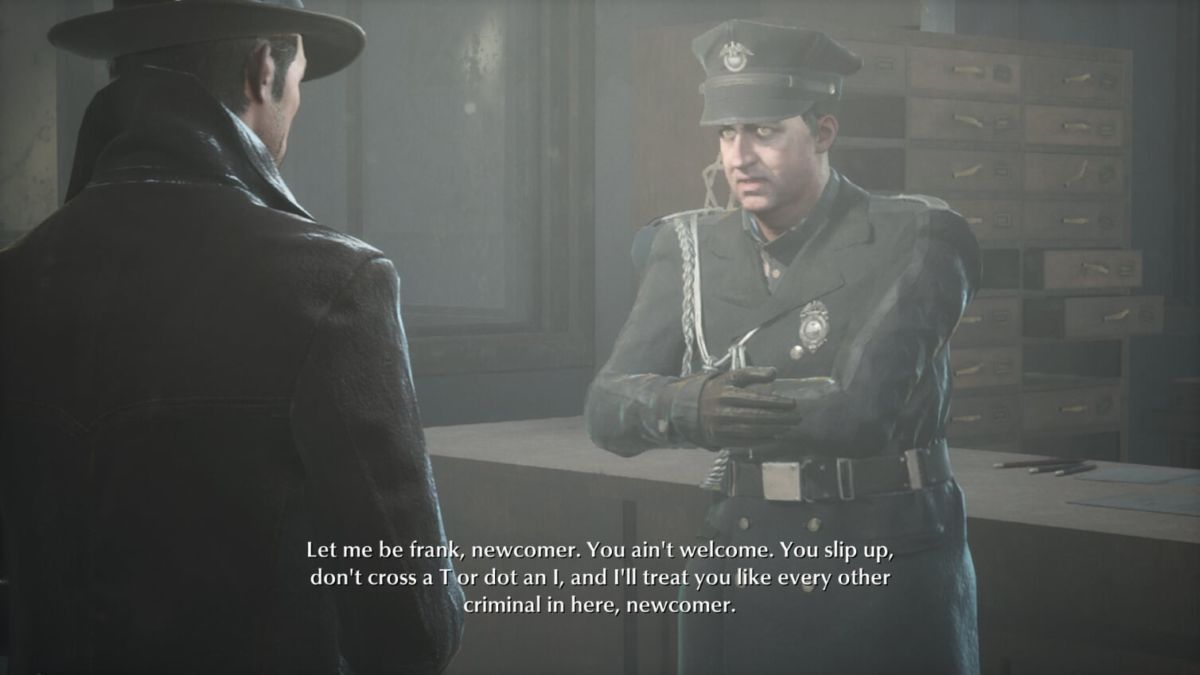 The big twist The Sinking City has over Shadow Over Innsmouth/Dark Corners of the World is the Mind’s Eye and insanity mechanics. Reed has a connection to Oakmont through his visions (to go into it would be spoiler territory). Using a second sight called Mind’s Eye, similar to maybe Geralt’s Witcher Sense, you can dispel illusory walls, track omens through the environment, and on the rare occasion pick up a clue. The downside is that tapping into this ability drains your sanity, as does facing the surprisingly varied number of enemies. While I never had the sanity meter reach zero, the effects of a low sanity bar include creepy (eventually repetitive) visions, fisheye lens effects, and in one instance a total screen blackout, which I’m not totally convinced wasn’t a glitch.

The Sinking City is a certifiable mess to play. The impressively omnipresent screen tearing took forever to get used to, loading times seemed to drag on longer and longer the further I got into the game, and the framerate could be best described as sluggish at worst and choppy at best. But despite the lack of polish, I’ve yet to see any AAA developer match the distinct and addictive nature of Frogwares’ investigation system.

To focus solely on performance or design shortcomings would be to undermine what makes The Sinking City so special and engaging. The thickening plot and weird twisted endings are Lovecraftian as hell and you can tell that there was a lot of love put into creating this new take on a literary classic. With the hope of future patches, a much better optimized PC version, and a self-published Switch port coming later this year, The Sinking City may eventually get the polish it deserves. Until then, it’s hard to recommend in its current state on consoles. 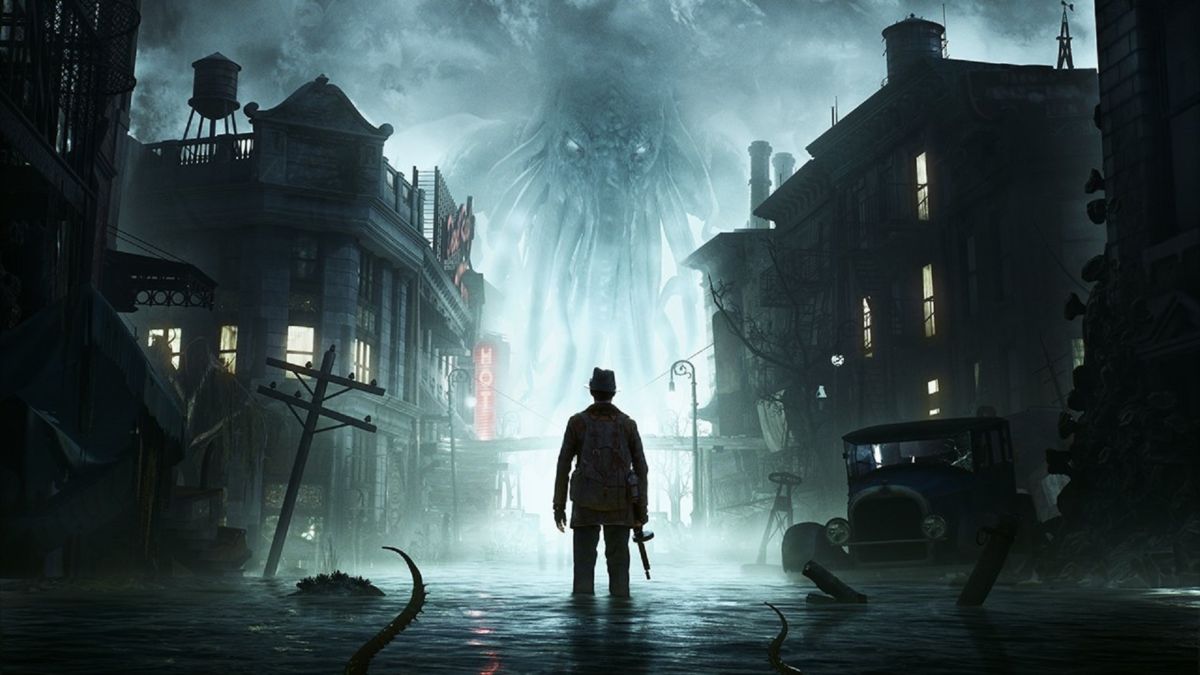 Verdict
It’s very hard to call The Sinking City a “good game,” all things considered, but it was definitely a game worth making. Keep an eye out for future improvements and hopefully someday it’ll be a game worth playing.
5
Buy on Humble (PC)Buy on Amazon (PS4, XB1)