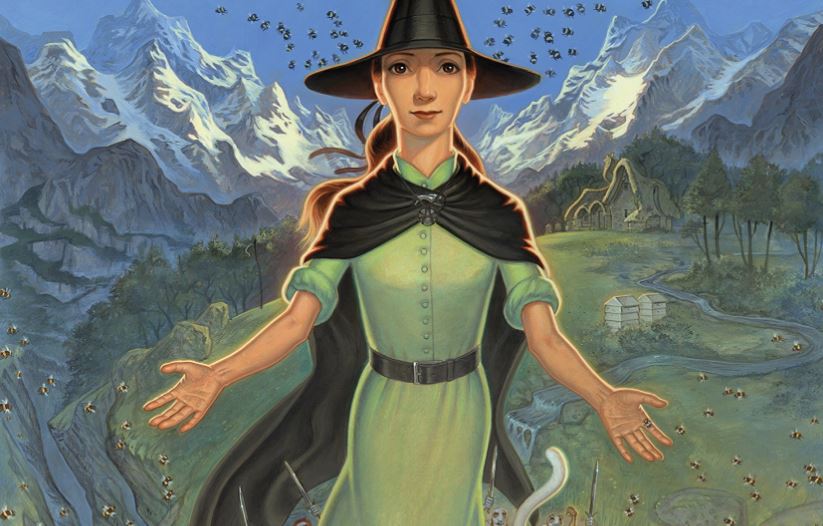 Well, this is it, Discworld fans! Almost exactly two years after I started re-reading for Cultured Vultures, I’ve reached the final book in Sir Terry’s masterpiece series. A lot happens in a life in two years and mine has been no exception, but reading this series has been a common thread in that time, one that has kept me on track and moving forwards no matter what else might be going on. I don’t quite know what I am going to do with myself when I type the last word of this article, other than give myself a pat on the back for a job finished and, I hope, well done. Before we get there, however, there is ‘The Shepherd’s Crown’ to discuss!

Terry Pratchett died in March 2015, five months before his last Discworld novel was published. It was a shock to fans – we all knew he was ill, but none of us really knew how soon he would be taken from us. According to an afterword by Rob Wilkins, Sir Terry’s loyal right hand, the great man was developing new ideas for more novels right up until his death. Whether Sir Terry knew it would be or not, ‘The Shepherd’s Crown’ turned into his last statement on the Discworld and it is, of course, wonderfully fit for purpose. And by wonderfully, I mean also painfully.

‘The Shepherd’s Crown’ is a Tiffany Aching book, focused once more on that young witch who we have come to know and love, accompanied of course by the Nac Mac Feegles. It would, I think, be quite a fitting ending for the Disc anyway, following the next generation of characters as they grow and learn. Tiffany ends the novel as head witch, a ‘first amongst equals’, so far from that little girl of ‘The Wee Free Men’, and if this was truly supposed to be the end of her story, I can’t think of an end for her that would have been better.

Where ‘The Shepherd’s Crown’ begins to reflect on life is with a death, namely that of Esmerelda ‘Granny’ Weatherwax, one of Terry Pratchett’s greatest creations and undisputable matriarch of the entire series. I’ve talked a lot before on Granny and the impact she has as a character, and that is apparent even here when she is not present for most of the novel; my favourite moment is when the shockwave of her death resonates throughout the Disc and we see many other characters feeling that wave and just knowing that it must be because of her. The barriers of the world that she has held for so long, against the forces of darkness that would threaten the Disc, become more open after her death and it is up to Tiffany, Granny’s chosen successor to co-ordinate the other witches and fight back against the elves who we saw banished way back in the series.

Granny’s death is the first we see of a main character in any of the books, and I am glad that it is given the time that it deserves. With everyone from Archchancellor Ridcully to Lord Vetinari watching and waiting to see what the witches will do, there can be no doubt of Granny’s importance and the respect that she commanded. On a more personal note, Pratchett dedicates the book to her – ‘For Esmerelda Weatherwax – mind how you go’, and the bitter sweetness of that dedication, knowing now that he did not live to see the publication, plays very strongly on your mind as you read the novel. I try not to be too sentimental in these articles (probably not always winning at that) but I am glad that Sir Terry had Granny Weatherwax at his side in the end. She is, undoubtedly, a good friend to have there.

There’s a lot more that I could say about this book, and most of it would be rambling because it holds such a special place in my heart, but I won’t do that. I will mention though, two lessons that are prevalent in this book and which, I think, sum up Discworld and Sir Terry’s message, should anyone ever ask you what they might be. I hope that they also sum up the articles I have been writing here, as I try and distil Discworld down to its most very basic elements.

The first lesson is about giving people a chance. When the elves kidnap a goblin to ask him about the world they are about to re-enter, the creature that might once have been afraid of them mocks them and throws iron shavings (swarf) at them. Iron is an elf’s greatest weakness, and thanks to the new railways there is a lot of it knocking around where once there was none. The elves are enraged but their prisoner laughs at them and says, ‘In this new world, little things like swarf – and goblins – do matter’. So much of Discworld is about those ‘little things’, individual people and moments that really do set the ball rolling and have the power to change the status quo, if only they are given the chance. Tiffany herself was one of those ‘little things’, and see where she ended up.

The second lesson is about what you take and what you leave behind. When Death comes for Granny, he tells her ‘YOU HAVE LEFT THE WORLD MUCH BETTER THAN YOU FOUND IT, AND IF YOU ASK ME…NOBODY COULD DO ANY BETTER THAN THAT’. He is talking to Granny, of course, but he could have been speaking to any of the Discworld favourites, who have all done their bit to make the world better. Sam Vimes and Vetinari (tyrant that he is) are the most obvious examples, but I think that any Discworld character who is fundamentally good deep down – Ridcully, Moist von Lipwig, Nanny Ogg, to name a few – have all been doing this in their own quiet way. The Disc of ‘The Shepherd’s Crown’ is a very different place to the one that Rincewind was chasing around in ‘The Colour of Magic’; more accepting and more open to embracing that which is different.

I believe that this is Sir Terry’s message, above any other; the power to make the world a better place exists in everyone, no matter how small you might be, and no matter how much you might believe that you can’t. You need to only look for it, and there it will be. It is a lesson that I think he would have been happy for any reader to take away and treasure. It is surely his greatest legacy.

That brings me to the end of my re-read and the end of this long endeavour! Goodbye Discworld, and goodbye Sir Terry Pratchett. Thank you for everything – and mind how you go.