This one sneaks up on you. 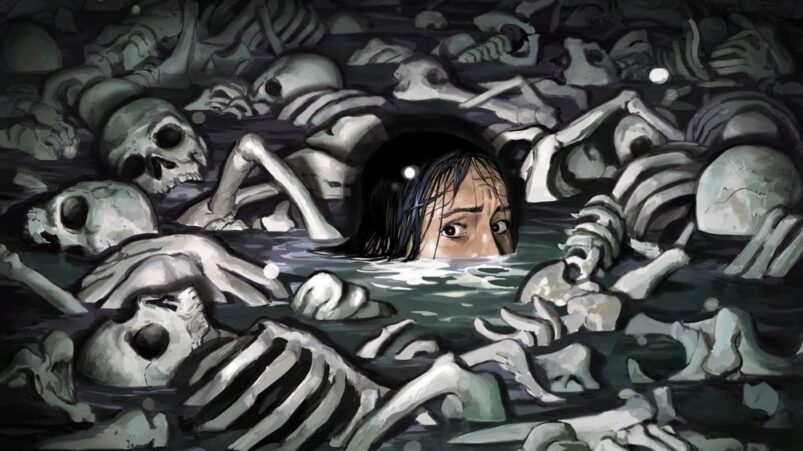 The Nice House On The Lake

When The Nice House on the Lake first hit shelves back in 2021, the DC Black Label series quickly established itself as the hottest new horror title around. Creators James Tynion IV, Álvaro Martínez Bueno and Jordie Bellaire delivered an unsettling yarn which not only offered a clever twist on the genre’s well-worn “cabin in the woods” trope, but also tapped into today’s “end times” zeitgeist, as well.

DC recently repackaged The Nice House on the Lake’s first six issues as a collected edition, giving latecomers a great jumping on point now that the series’ mid-season break is over. Even so, if you’re planning to buy The Nice House on the Lake Vol. 1, you may want to think twice. That’s because this comic book’s true horror lies in more than just supernatural goings on and gruesome gore – it’s in making readers face up to a single, terrifyingly timely question: how will you react to the apocalypse, now that it’s here?

Of course, you won’t necessarily realise that’s what The Nice House on the Lake Vol. 1 is driving at, not straight away. Like the classic 70s and 80s horror stories that inspired it, The Nice House on the Lake doesn’t beat us over the head with its allegorical elements up front – even though the very first issue opens with two characters contemplating the end of the world. No, once The Nice House on the Lake seeds its big, underlying idea, it immediately dials things back again before the weight of that idea becomes too overwhelming, too soon. Staring down Armageddon is never easy, so before this six-issue collection asks us to do so, it wisely lures us in with its novel premise first.

This is a haunted house story where a remote holiday spot in the wilderness is – perhaps for the first time ever – decidedly safer than the urban settings our ensemble cast have left behind them. Not only that, but everyone there was invited because the ostensible “monster” of the story, Walter, wants to keep them alive in paradise, not kill them in some grubby shack. It’s a stunningly effective inversion of an over-used plot device that, together with The Nice House on the Lake’s lush artwork and innovative use of prose and graphics-driven data pages, conspires to make you drop your guard just long enough for the story’s subtext to sneak up on you.

Because as Tynion has already said in interviews, The Nice House on the Lake isn’t about otherworldly forces, slow-burn mysteries, or even freaky false utopias – not really, anyway. It’s about getting by in a world that seems to dish out new horrors every day, from global pandemics to the threat of global war. It’s about having to confront the reality that society as we know it might be teetering on the brink of all-out disaster. In short, it’s about what it’s like to be alive at this exact moment, when multiple doomsday scenarios have already arrived, and – more than that – what each of us chooses to do next.

Chances are, you’ll probably see your own choice reflected in the response of at least one of The Nice House on the Lake’s 10 core characters. Maybe you’ll adopt a pragmatic approach to the end of the world and accept the new status quo, like Rick does. Perhaps you’ll try to cling to some semblance of normalcy and fuss over everyday things like making dinner, like Naya. Possibly you’ll give into despair like Molly, or fixate on finding a solution to your current catastrophic circumstances, like Sam. Heck, you might even decide to try bringing everyone together as a team, like David.

Your reaction might be to do one or more of these things, or none of them at all – and that’s totally fine. The Nice House on the Lake Vol. 1 presents all these responses as equally understandable, even Rick’s seemingly unforgiveable decision to facilitate Walter’s at-times sinister plans behind everyone’s back. Tynion, Martínez Bueno and Bellaire don’t pretend there’s an easy answer to the question. On the contrary, they seem to intuitively grasp that maybe there is no right answer, and that maybe what really matters is simply having the courage to settle on one anyway, despite the hopelessness of it all.

More than anything, it’s this refusal to serve up pat solutions to the borderline-intractable problems facing us today that elevates The Nice House on the Lake into the upper echelon of contemporary comics, horror or otherwise. And while navigating our world in the weeks and months ahead will undoubtedly be a challenge, at least we’ll have the next six issues of this series to help see us through.

READ NEXT: The Batman: Should The Dark Knight Kill?