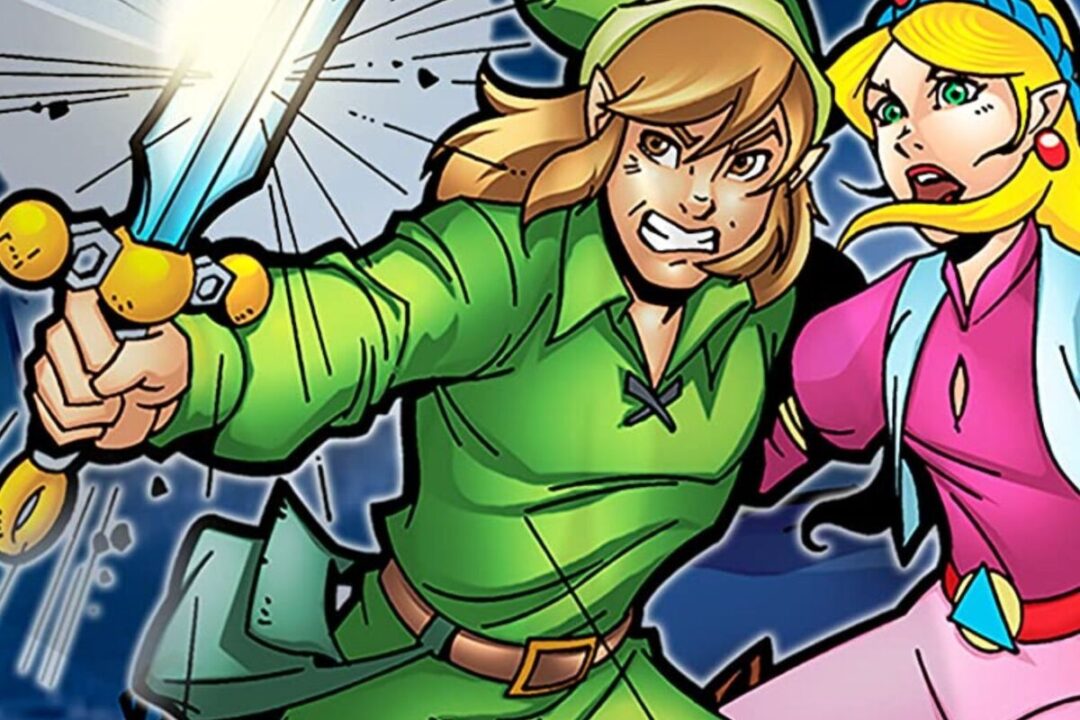 While it has a reputation as being one of the worst cartoons ever made, the 1989 The Legend Of Zelda TV adaptation is nowhere near as bad as people usually make it out to be. Fans tend to view the cartoon as a blight upon one of the most critically acclaimed franchises of all time, so if there are any Zelda purists reading this, at least listen to the points I make before you reach for your torches and pitchforks, because this show deserves a second chance.

First and foremost, let’s get this out of the way: The Legend Of Zelda cartoon, which was produced by DIC Animation City in collaboration with Nintendo, is not a great show. The plot lines are predictable and repetitive, Link is depicted as a creep who constantly wants to kiss Zelda, and the animation is low-quality and full of glitches, including some beyond unsettling moments where the characters lips don’t move when they talk and other times when they say nothing and yet their lips still appear to move. So no, this is not a show which will ever be included in any top ten animation lists, and rightly so. However, once you look past all these obvious flaws, you’ll find there’s actually a great deal to enjoy with this widely panned cartoon.

Although his infamous “Well excuse me, Princess” catchphrase has been mocked and memes to death over the years, Jonathan Potts actually does a surprisingly decent job as the voice of Link, bringing a strong sense of childlike energy and enthusiasm to the Hero of Time which you obviously won’t experience with the silent version of Link from the games. While his constant requests to be kissed by Zelda do grow tiresome (and a little creepy), Potts’ performance sounds exactly like you would expect a naive, adolescent hero with great responsibilities to sound.

Since he actually talks, the usually-mute Link is also given much more depth here than in other Zelda media. To give a few examples of this, he bemoans how he now lives in a castle instead of exploring the world. He cries and calls himself a monster when he is turned into a frog. He asks Zelda if she is jealous when he kisses another woman. He boasts of his achievements and accomplishments, and claims to have defeated fifteen Moblins who invaded the castle, when there were actually only three. And he dresses in an extravagant suit to impress Zelda, then storms off in a temper tantrum when she laughs at him.

The writers were not afraid to give Link a personality, something he lacks in the games, and it’s conveyed well. They didn’t forget that Link is not yet a full adult, and his more childlike tendencies clearly shine through. And while he can no doubt be annoying at times, it still felt refreshing for Link to actually have a defined personality and an attitude instead of remaining silent. It was also a bold move for the animators to have made such a big departure from the games, and in this case, I think this was the right decision. Because while it might be fine to have a silent protagonist in a video game, this is not something which would translate particularly well to a TV show which you watch instead of play, and there is no denying that Link feels far more like a fleshed out individual here than he does in the games.

But perhaps the show’s greatest achievement comes in the form of Princess Zelda, who is portrayed as a strong and fearless heroine who does not hesitate to rush headfirst into a fight. I’m are all for strong female characters, and while Zelda was occasionally a damsel in distress in need of rescuing, the majority of episodes feature her aiding Link in battle by using an assortment of weapons to defeat Ganon’s minions. She even yells “Fat chance” at one point when Link tells her not to fight, before fearlessly rushing headfirst into battle. Although this was the decade of She-Ra, it was still relatively uncommon for a cartoon from this period to have a female character who was not afraid to get her hands dirty, so kudos to the writers for that.

Voice actress Cynthia Preston also does a great job as Zelda, and it’s clear that she was well cast alongside Potts. Say what you will about some of the more infamous lines of dialogue (Link’s bizarre “smooching time” line comes to mind), but there’s no denying that Potts and Preston were both well cast in their roles, and the chemistry between the two actors is undeniable. There were plenty of humorous back and forth lines between Link and Zelda which are bound to make you laugh. Especially when he says that it’s past his bedtime, and yet she still demands him to get dressed and accompany her on a quest. Even older viewers who might otherwise be bored by cartoons will still enjoy the witty banter between the two heroes.

I won’t deny that this cartoon was clearly only produced as a game tie-in, so I respect the writers for adding in moral messages, so kids could at least learn something useful from watching it. One particular episode of The Legend Of Zelda even went as far as to convey the message that beauty is only skin deep, with a shallow narcissist named Prince Facade (because screw subtlety) refusing to rescue Zelda from Moblins because he doesn’t want to get his fancy clothes muddy. Link, on the other hand, dives into the mud without a moment’s hesitation, and you can guess who Zelda chooses at the end.

Ganon in himself makes the show worth watching, and that’s not something I’d say lightly. Rather than the wise and charismatic manipulator he is in the games, he is depicted in the show as a boisterous, bumbling, pig-faced buffoon who will stop at nothing to get his hands on the Triforce of Wisdom (which Link keeps in his bedroom for some reason), often resorting to harebrained schemes which backfire horribly.

While here Ganon isn’t a particularly threatening or intimidating villain, he certainly provides some golden comedy value. He screams most of his lines and laughs maniacally when explaining his plans, and then he throws temper tantrums when he loses. He even says that he finds the idea of Link and Zelda being in love with each other to be disgusting. In the first episode, he explains to his Stalfos henchmen how to fight by demonstrating punching manoeuvres, and seeing him wildly throwing his fists into thin air while laughing like a maniac was probably one of the funniest moments of the whole thing.

Another aspect of The Legend Of Zelda cartoon which makes it endearing is that the action sequences are so over the top and ridiculous that you really don’t have any choice but to be enthralled by them. The animators apparently thought Link’s body was made of rubber, because he’s able to leap impossibly great distances when the need arises. He also bounces off surfaces as though they were trampolines, and the result is so damn bizarre that you’ll just enjoy watching it although questioning the logistics.

Once you see Link using what looks like a wooden shield to surf along a wall of flames (which he literally refers to as “Flame surfing”), you’ll understand that scientific laws apparently do not apply to the Kingdom of Hyrule, and these reality defying sequences are nothing if not entertaining in a don’t-ask-questions kind of way. Heck, the show’s intro sequence featured a shot where Link seems to teleport from his room in Hyrule Castle onto a horse running across a road on the ground, so it’s probably best not to ask questions.

When fighting, Link barely stabs and slashes at enemies with his sword. Instead, his main form of combat is firing energy beams from the blade of his sword as though it were some kind of laser weapon. After Links zaps his enemies, they are transported to Ganon’s magic Evil Jar, where they float in midair until the villain sends them out on another task. The pure weirdness factor of this show really does make it worth watching at times. After all, where else are you going to see Hyrule Castle sinking into the ground only to rise at the end of the episode like a phoenix emerging from the ashes?

This may sound like a cliché thing to say, but the Kingdom of Hyrule was also a character of itself in The Legend Of Zelda franchise, and the show expands upon the lore of the world featured in the games. Viewers learn that magic is so prevalent in Hyrule that Zelda even hosts contests where the citizens compare their spells, and that people living within the kingdom even use magic to assist them in their daily tasks, such as casting spells to make their crops grow faster or to light furnaces. While the show is obviously considered non-canon and has no place in the official Zelda timeline, it was still interesting to see this glimpse into the culture of Hyrule.

Most of the enemies and boss characters from the games also appeared in the cartoon, and they stayed true to their original designs and were usually mentioned by name to appease fans. So we get some very fun monster battles, which were usually accompanied by an entertaining soundtrack, which utilised the game’s music rather well. Even hardcore Zelda who hate the show will not be able to deny that these two particular aspects were handled decently.

The Legend Of Zelda only lasted for one season, and the entire show can actually be binge-watched in just over three hours, so it won’t take up too much of your life. So while you may be skeptical at first, I strongly recommend giving this show a second chance. Because while it’s certainly no masterpiece, it offers a great deal of entertainment value. Despite its flaws, Link and Zelda were presented as two well-defined and fleshed-out characters, and when you combine that with the way the show builds upon the lore of the games in addition to the unashamedly absurd action sequences and the hilarious villain, it becomes clear that this show is worth another look.

READ NEXT: The Best Video Game Documentaries You Should Watch