Racism, Funny Voices, and The Simpsons 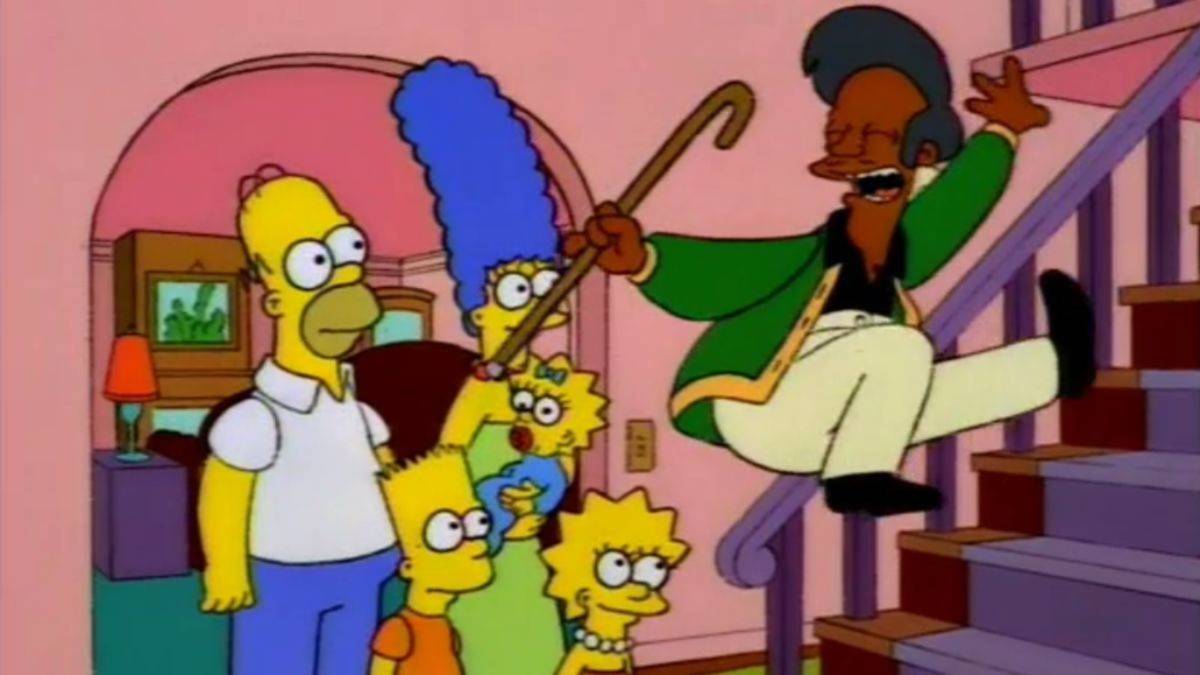 An off-the-cuff statement made by Hank Azaria to TMZ has spawned a hellbroth of wild speculation that beloved animated show The Simpsons might kill off beloved Indian stereotype Apu Nahasapeemapetilon. The controversy arises from a recent documentary made by Indian-American comedian Hari Kondobolu, The Problem With Apu, the central thesis of which is that for the longest time, the absolute most visible and prominent representation of South Asians in the mainstream media was Apu – and because of this the fact that he’s voiced by Azaria, a white guy, is particularly iffy.

The Problem With Apu offers a sincere, first-hand look at how actual Indian people have received Apu as a character. The upshot is, essentially, that because of the natural uncreativity of racists, Apu is the go-to source for racist stereotyping. Kal Penn, star of stoner buddy-comedy franchise Harold and Kumar and one-time member of the Obama administration, relates the time a drunken Indian man furiously complained to him about being compared to Kumar, and he responded, essentially, ‘it’s not as bad as Apu’ – a point the drunk instantly conceded. We also get Utkarsh Ambudkar’s tale of guesting on The Simpsons in 2016 as Apu’s nephew – he suggested, after a line in which he accuses Apu of being a stereotype, they should include a brief flash of Azaria in the recording booth looking shocked. Because The Simpsons is a pale shadow of what it once was, they didn’t go for it.

Unfortunately, the documentary also offers a fair bit of Kondobolu himself being terribly precious – I’m not suggesting he’s being over-sensitive about it (although more on that later), but when a good chunk of your documentary is your increasingly desperate attempts to get the famous subject of your documentary to appear in it, maybe think about going back to the editing room. And speaking of editing, Hari, baby, we’ve all wanted to make crude animations of ourselves beating up people we don’t like, that’s just part of being a man – you don’t need to actually go out and do it.

I also have to ding him for criticising how one of the big jokes about Apu is that he is foreign and different and therefore funny, but not illustrating it with this.

The nearest Kondobolu comes to actually getting Azaria to appear is the email Azaria sends him declining the offer. Azaria cites his fear of being at the mercy of the editor’s knife, but to be honest, it’s hard to imagine him managing anything that looks much worse than the clip of him doing the Apu voice at a university graduation in 2016. Or Azaria citing, as an influence on Apu’s voice, Peter Sellers’s performance as a bumbling Indian doctor back in the ‘60s. Or, indeed, Dana Gould’s memory of the script reading where Apu was born, in which Azaria gave the then-unnamed store clerk a thick put-on Indian accent – to gales of laughter from the all-white cast and crew, despite the fact that the line in question was ‘Okay, don’t you kids take anything’. Who doesn’t remember that classic gag?

The documentary draws many blunt comparisons between Azaria’s Apu voice and the practice of ‘blacking up’, which had its heyday in the profoundly racist days of minstrel shows, back in a time when they wouldn’t dream of letting black people on stage but still wanted to make fun of them, and hit on a solution that made everything worse. While this still happens today, it’s rarely as laughably awful as the days of minstrelry, and is generally frowned upon. That’s not one-directional, either – very few white people were fans of the Wayans brothers’ 2004 comedy White Chicks.

This is a comparison often made when a member of a marginalised group is played by someone who isn’t marginalised in that way. Daniel Day-Lewis was accused of presenting ‘disabled blackface’ when he starred in My Left Foot, with disabled characters played by non-disabled actors being possibly the most common manifestation of this – though right-on outlets like The Guardian don’t really help matters when they coin phrases like ‘cripping up’ to describe it. The Fast Show probably takes the prize for satirising this tendency – it had a sketch in which a thinly disguised Forrest Gump wins the Oscar for ‘best portrayal of a cute disabled man by a fit and healthy young actor’.

While blacking up isn’t exactly what’s going with Azaria playing Apu, it’s not a wildly inaccurate way to describe it. It is perhaps more acceptable that Azaria isn’t himself wobbling around on camera smeared with boot polish from scalp to chin, but on the face of it, ‘white man does silly Indian accent’ doesn’t sound good and is not something a show created today would sign off on. Interestingly, while Apu’s voice is the major sticking point, the documentary brings up the point that there’s a long tradition in Indian cinema of ‘pedanking’ – that is, playing up to all the stereotypes surrounding Indian people, the comedy accent included.

Obviously in these, shall we say, argumentative times, the Apu debate has brought a backlash from many fans of The Simpsons, not to mention those who believe that everyone’s too sensitive these days. Granted, with India and Pakistan still locked in their own miniature Cold War over the Kashmir Pass, one could argue that Indian people have more to worry about than the existence of a problematic cartoon character. However, because of the way debates about stereotyping seem to work, most of the defences of Apu ignore the fact that he’s played by a white actor putting on an Indian accent, and instead fall into one of two horns – 1) The Simpsons is full of stereotypes, and 2) as mentioned, the show’s been going since 1989, it was a different time.

Now, the former does have the ring of truth. One popular comparison is that Groundskeeper Willie is voiced by a non-Scotsman, and nobody complains about him. However, the people making this comparison really just betray their ignorance of their own fandom – there’s a much better contrast to be found in Akira, the face of Springfield’s only sushi restaurant, who also runs the dojo in the strip-mall. While Japanese by heritage, he is also voiced by Hank Azaria doing a funny foreign accent. 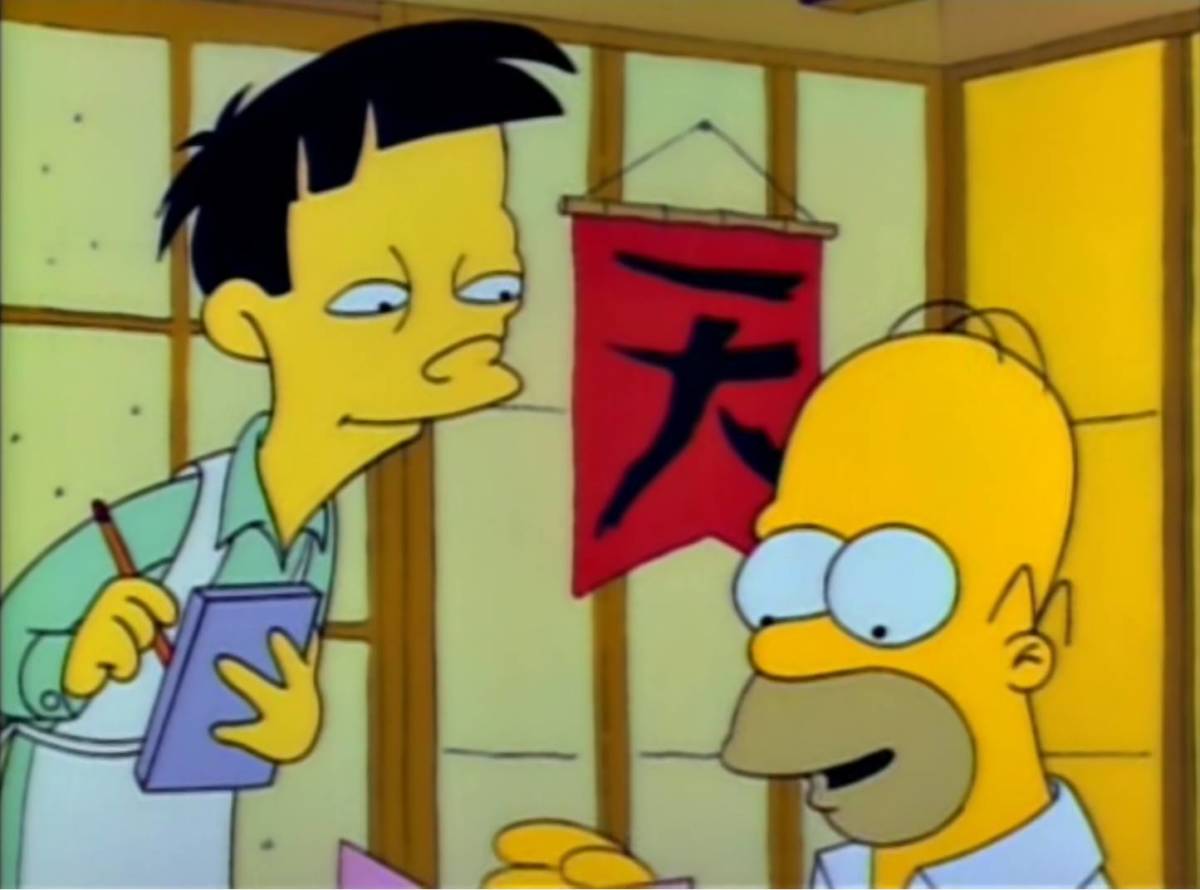 So, why doesn’t Akira suffer the backlash? Yes, granted, in his first appearance he was voiced by now-disgraced Japanese-American actor George Takei, but let’s be realistic here, having Apu occasionally be voiced by an Indian-American would do precisely nothing to assuage the critics. The fact is that this defence of Apu isn’t really engaging with one of the main thrusts of Kondobolu’s argument – the simple fact that Apu was without a doubt the most prominent Indian-American character in popular fiction. If there were no other popular Japanese characters in the media, it might be Akira drawing the ire. Alternatively, imagine if the absolute best known Scottish fictional character was William Wallace as played by Australian anti-semite Mel Gibson.

Apu’s prominence, though, ties into the second argument, and the wider fact of the status of The Simpsons as a pop-cultural giant with no obvious equals. The show has indeed been going since 1989 – and anyone who isn’t blindly talking it up to the press will agree that despite a glorious golden era, it reached the end of its natural shelf-life sometime around the turn of the millennium. Had the show died a dignified natural death about the time that The Simpsons went to Delaware, Apu could be more easily brushed off as a product of a simpler time – indeed, even as a small morsel of representation for South Asian people in a cultural landscape that was sorely lacking in it. This is a point Kondobolu himself makes, that Apu was the only character on television he could see his own ethnic background in – and given that history, his discovery that Apu was, in his words, ‘a white guy’s idea of what (his) parents sound like’ must feel like a betrayal.

As it is, though, The Simpsons kept churning out episodes that weren’t up to the old standards, and Apu’s still around today, still being voiced by Hank Azaria, and despite any rumbling the show puts out in response to its critics, likely will be until the show becomes unprofitable. And in the bitterest irony of all, Kondobolu himself also seems to have lost sight of his actual argument. After this recent development, by which I mean Azaria mumbling something at a reporter while late for a plane, Kondobolu took to Twitter and backed down from his position of wanting to destroy Apu as a character, instead suggesting they just give him more plotlines and make him more successful. This can perhaps be interspersed with flashes of Azaria in the recording booth, drinking champagne.