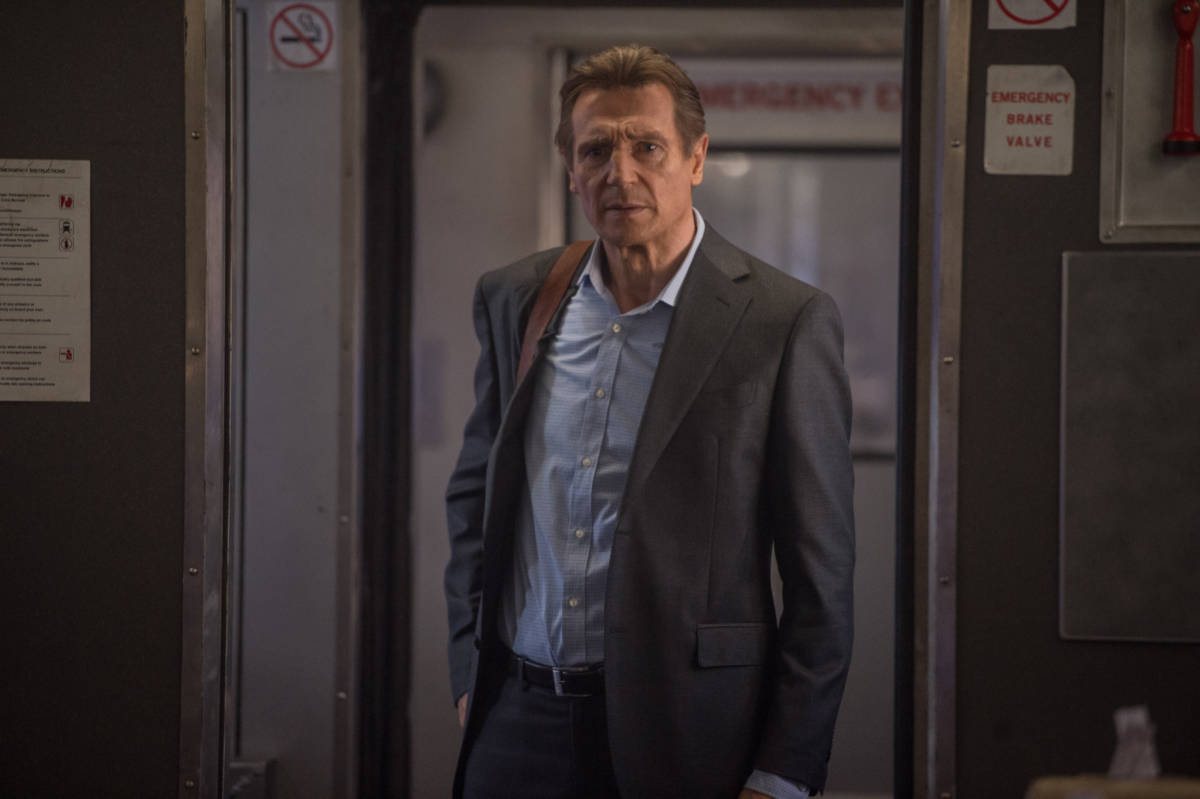 The Commuter is a wildly predictable Liam Neeson vehicle that falls short of Hitchcockian standards for action thrillers.

Teaming up for the fourth time with the action star, Jaume Collet-Serra directs from a screenplay written by Byron Willinger, Philip de Blasi and Ryan Engle. The script has the potential to be so much more, such as a Hitchcockian thriller on the train, but it only turns into a missed opportunity. It’s almost as if it’s Taken meets Strangers on the Train.  Regardless, Taken on a train isn’t the wisest idea because the franchise has been overdone.

Neeson stars as Michael MacCauley. He’s the typical New Yorker with the routine commute from his home outside of New York City to the office in midtown Manhattan, where he works as an insurance salesman. He lives at home with his wife, Karen, (Elizabeth McGovern), and son, Danny (Dean-Charles Chapman). It’s on the train where Michael makes friends with the regulars on the train, including Walt (Jonathan Banks) and Tony (Andy Nyman).

On the same day after he loses his job, Michael takes the train home as he always does. It’s on the ride home where Joanna (Vera Farmiga), a mysterious woman on the train, plays philosopher and asks Michael one simple question: “Would you do one tiny, little thing for $100,000?” Telling him that she studies human behavior, she wants to know what he would do if someone offered him a very high financial reward for finding someone on the train with a bag that contains stolen property. One thing leads to another and Michael quickly finds himself blackmailed and hopes to find this suspicious passenger before the train reaches the end of the line. Tt’s life or death, not only for him, but the rest of the passengers.

There’s nothing special about Michael. He’s an ordinary man who happens to find himself in an unfortunate circumstance. It’s a Neeson vehicle so this doesn’t really come as any type of surprise. There’s no reason on earth for someone to blackmail him so there’s got to be a situation playing out behind the scenes. A former cop, Michael is able to borrow a phone and get ahold of his friend, Lt. Alex Murphy (Patrick Wilson), on the police force. They were partners on the force and Murphy’s always had his back and it’s Murphy who tells Michael to inform his wife that he lost his job.

Lady MacBeth star Florence Pugh delivers a performance that’s highly unrecognizable as college student Gwen but the actress is certainly a star on the rise. Taking place in a commuter train, one thing that the film does get right is diversity in casting. While the roles may be smaller, everyone is a possible suspect.

Told in real time from Michael’s point of view, the thrills are never-ending as fast-paced Hitchkockian-esque thriller heads towards a climax, including a few fights and a visual effects sequence with the train. The camerawork from cinematographer Paul Cameron becomes a character in its own right. Combined with the efforts of production designer Richard Bridgland, the lighting feels authentic.

A film that is easily interchangeable with any Liam Neeson vehicle, The Commuter is a forgettable January thriller.

Lionsgate releases The Commuter on January 12, 2018.