Tetris Effect provides players of all experiences the chance to discover what has made the franchise so iconic while also pointing towards the future. 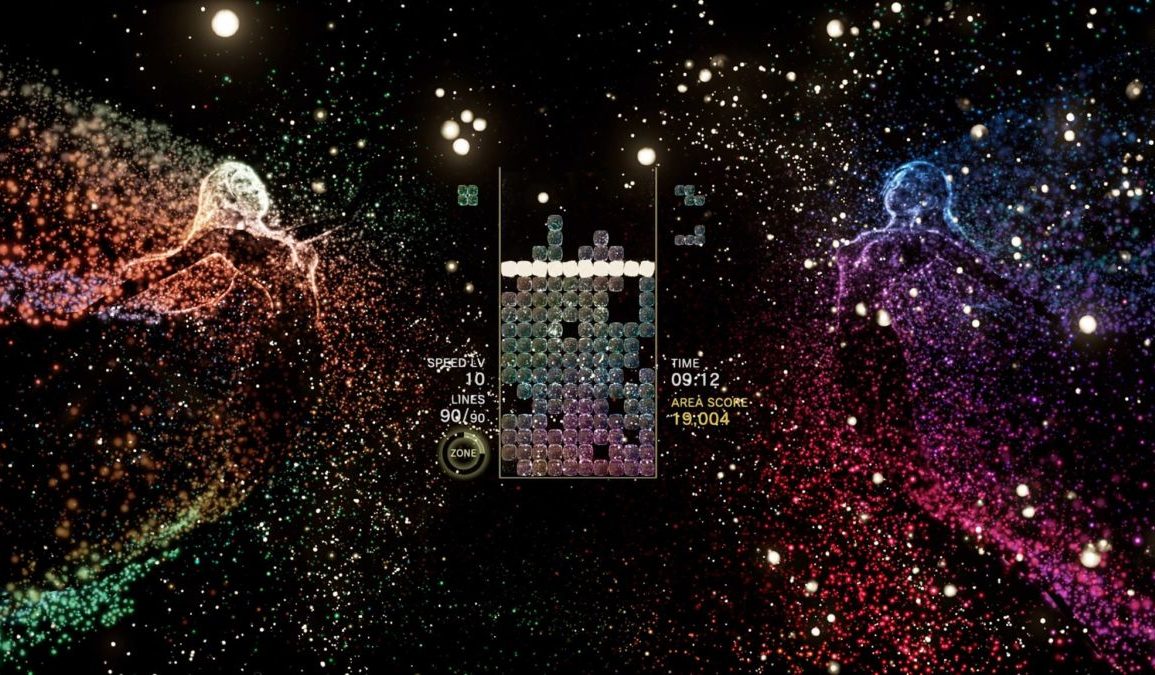 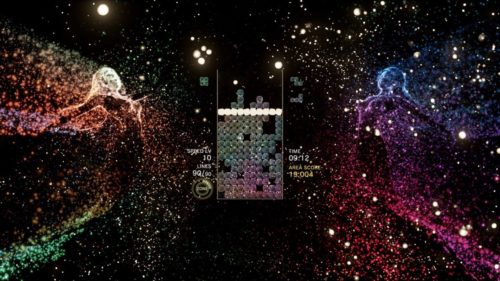 Tetris. Tetris never changes. Until it does with one of the most visually jaw-dropping and surprisingly emotive games of 2018 in the form of Tetris Effect for PS4 and PSVR. While the main hook of Tetris remains the same — organising blocks into lines to stop them from reaching the top of a grid — the presentation of Effect means that this three-decade old classic now feels the freshest it has in years.

Recently released on Sony’s flagship, Tetris Effect is the most experimental game in the franchise to date, which might be surprising considering how many permutations of the basic premise there have been for over thirty years. They say that you shouldn’t mess with the classics, but not only does Tetris Effect completely overhaul what a Tetris game is, it also welcomes in new players for what has effectively become a niche obsession versus its more eye-catching peers.

As someone who has never considered themselves a puzzle game devout, Tetris has always offered a challenge to me. My brain simply isn’t wired well enough to enact the wild precision and pace necessary to even make a dent on any leaderboards. To put it simply: I suck ass at Tetris. Typically, when I hit the brick walls that something like Tetris Effect threw at me, I would call it a day and go back to shooting a thing. Not here: I relished in adding extra digits to my scores and eventually going past level 10 in difficulty without having a full collapse in body and mind.

That seems apt as Tetris Effect is one of the most spiritual games I’ve ever encountered, so much so that my mouth was slack-jawed so often that I am surprised nothing decided to make a nest in there. It’s a true stunner, whether in virtual reality or not, and about as far away from being a simple game about blocks as you could imagine.

The biggest allure for Tetris Effect is its new Journey Mode, which will take you across locales from around our world and even beyond. Coming from the mind of co-producer Tetsuya Mizuguchi of Rez fame, Journey Mode is a constantly staggering piece of art, something that is so awe-inspiring and reflective of the player’s own mentality that it matches Thatgamecompany’s game of the same name in terms of the emotional reaction it provokes. Goosebumps await.

As it’s such a visual experience, I find it difficult to put into words exactly what makes Journey Mode such an enthralling time. Whether you’re visiting the desert or swimming with dolphins, it’s easy to forget that you’re effectively just organising descending tetrominos, especially with the immersion provided by PlayStation VR and a good pair of headphones. I spent the majority of my time with the game deep within virtual reality (except for the last level which pushed me past the limits of my sanity) and it was yet another example to me of how 2018 has been the breakout year for the peripheral.

The core gameplay doesn’t change massively within virtual reality as you will only ever need a DualShock to control the tetrominos, but being able to look around at your gorgeous environments and watch in wonder as they transform depending on your progress never became tiring for me. Supplement that with some Europop with post sensibilities and you have a pure audiovisual feast that will make the hair on your arms stand up. If this sounds like arty nonsense, it’s became I am struggling to encapsulate exactly how special it is; it’s really something that can’t be explained accurately with words.

To tie in with its zen-like appeal, Tetris Effect also includes something called the “Zone”. A get out of jail free card, the Zone effectively acts as a moment of clarity for the player that allows them to slow things right down and be more tactical with how they place their tetrominos. You can boost your Zone by clearing lines and hitting combos, but as well as acting as help for beginners, the Zone also allows more astute players to reach a combo as high as an Ultimatris, which is when twenty lines are cleared in total. I never even came close to achieving it, but seasoned Tetris veterans will no doubt approach the bonkers challenge with glee.

Once you’ve been significantly awed by Journey Mode, there’s plenty more to tackle, so much so that it justifies what some might think is a pretty high retail price for a Tetris game. Effect Mode allows the player to choose from a variety of different challenges to suit their mood, so whether you want to wither your fingers to dust or simply unwind with an aural and visual buffet, you can. I am going to make a habit of playing the sea levels on a relaxed difficulty when things get too much for me personally, such is the cathartic nature of them.

There’s a tonne of options here, including some returning classics. Marathon, Sprint, and Ultra all make reappearance, but there’s far more depth here than you may first realise. Purify tasks you with clearing “infected” lines before they overcome the Tetris board and Mystery is the closest to a party game experience Tetris Effect has to offer with it having bizarre rules (the board flipping around, for one) that might make it a good introduction for newer players.

Tetris Effect is also welcoming for Tetris players of all experiences, so whether you’ve been playing since the eighties or are just trying to find out what has made it so iconic, Effect has you covered. Difficulties can be changed to suit your mood and music turned on and off on a whim, meaning that this is the most expansive and also approachable Tetris to date. While the lack of multiplayer does hurt it somewhat, the community aspect, which tasks you with communally completing weekly challenges called “Rituals”, is a nice touch.

Tetris Effect is one of 2018’s biggest and best surprises. The DNA of Tetris remains intact, but thanks to the added flair and astounding spectacle, Effect is probably the most adventurous and irresistible Tetris has been since the franchise began. 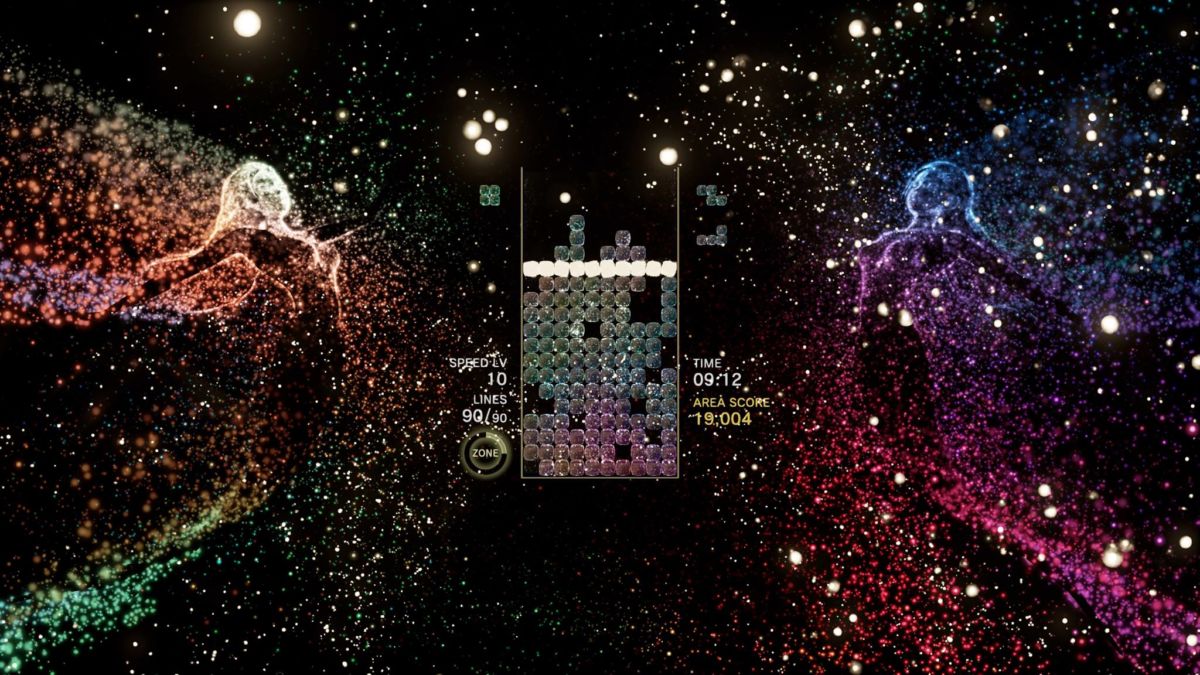 Verdict
An absolute delight, Tetris Effect twists and bends the mind of the player like few other games are capable of. While not quite a revolution of the classic premise, Effect provides players of all experiences the chance to discover what has made the franchise so iconic while also pointing towards the future.
9
Buy on Amazon