5 Things Temtem Does Better Than Pokémon

Should you catch 'em all elsewhere? 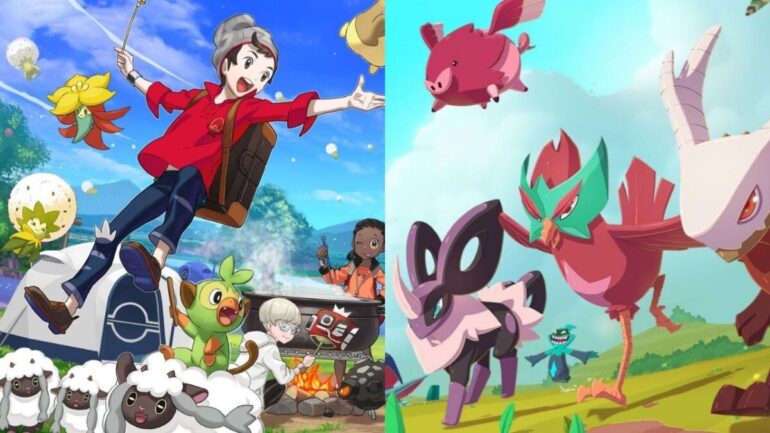 With it selling over 20 million copies since its release in November 2019, saying Pokémon Sword and Shield were big successes might be a bit of an understatement. This has made them the best-selling Pokémon games since Gold and Silver, however I can’t help but feel disappointed by some of its features.

It felt short with little to do post-game, featured the lowest challenge level of any main game so far, and had an uninspired plot, just to name a few of its problems. Maybe it’s a bit of franchise fatigue on my part, but when Isle of Armor came out, I instead spent my money on a Kickstarter game I’d heard about on Steam called Temtem. I was glad I did.

Temtem, despite still being in early access, does a lot of the things I wished the first console release of a Pokémon game would offer.

Temtem is a fully online MMO, which I think is its major selling point. I’ve heard many times in the Pokémon fandom that if they were to make a main series console entry, it should be an MMO. The Wild Area is about as close as we came to that and finding raid battles to take part in is sort of clunky. There isn’t a way to refresh group listings outside of a refresh button that works one time per connection, which, from a design perspective, doesn’t make sense.

In Temtem, this isn’t an issue since it’s a persistent world with players interacting with battles or trading Temtems and other goods. Game Freak could have at least made their online feature a bit more user intuitive and stable. It’s a no-brainer which game comes out on top here.

Another complaint about Pokémon Sword and Shield lies in its leveling pacing. During my first run through the game, hardly anything posed a challenge since I outleveled just about everything easily by getting the EXP Candies from doing minor lairs in the Wild Area by myself — and it didn’t take much time or effort to stockpile a lot. The gym battles were made to seem extra exciting with amazing music, a cheering stadium, and the ability to Dynamax a Pokémon.

This was all made anticlimactic when I could sweep the entire team with just one Pokémon with type advantage that was ten levels higher and even without using Dynamax, which is this generation’s big gimmick. It felt like I was just rushed to the post-game, which only consisted of the Battle Tower and a very dull plot involving Zacian and Zamazenta, neither of which were any challenge either.

In Temtem, stopping to level up teams is a must and having a few backup Temtems ready to swap into your team is beneficial. Dojo Masters — who are the equivalent to gym leaders — can’t just be taken out with one single Temtem. Like Pokémon, Dojo Masters specialize in one type of Temtem, but they actually use a team of 6 Temtem like you do and have one or two other types meant to throw you off, making Dojo Masters a more difficult but fair challenge. Considering the game’s pacing, you don’t seem to hit points where you outlevel anything. Grinding before these big fights are a must — it is an MMO after all — and getting a Temtem to the current max level of 70 and building a few different teams that use various strategies felt rewarding and challenging.

Now, I’m not saying that Pokémon’s battle system is bad. The formula is great how it is and I feel it shouldn’t be changed. Dynamax fights seem to fall flat when compared to how Mega Evolutions changed the metagame in gen 6. Game Freak hit the mark with an interesting mechanic and should have kept it instead of making a newer yet more inferior mechanic and scrapping the rest. I hope this doesn’t mark a trend for the future of the series. Ultimately, Pokémon’s battle system sweet and simple — it’s made to be approachable by everyone after all — but Temtem’s battle system still feels a bit more complex and interesting with the phrase “easy to play, difficult to master” coming to mind.

Mechanics such as double battles with co-op, stamina bars instead of PP, moves with type synergy, and buffs and debuffs having more impact keep things interesting and engaging even in random battles. Pokémon’s system is great, but maybe I’m liking Temtem’s more right now because it’s fresh and keeps me from just mashing the A button. Every encounter in Pokémon—from wild Pokémon to gym leaders—you win with ease as long as you have one Pokémon that has a move with the right type match up.

What’s starting to be a drag is the sheer number of Pokémon we have at this point. There’s now 980, making it somewhat overwhelming. Right now, with Temtem being in early access, there are 141 with 86 being available in its current update. It actually seems possible to fill up the Tempedia (their version of the Pokédex), but currently feels like a chore in Pokémon.

The tagline was always “Gotta Catch Em All”, and I always played to do just that. However, I hardly bother in the newer Pokémon games anymore since there is no way I can since I missed some mythical events, or I just can’t transfer them up through older generations. I really dislike feeling that what was once part of the game now feels impossible — sometimes less is more.

Another place where Temtem outshines Pokémon is the plot. Pokémon is not known for its intriguing and complicated plots, and that’s okay. It’s about your own story, in a sense that the focus is on making the perfect team of Pokémon for yourself and taking on other players. Still, it would be nice if they had something more.

Temtem’s plot isn’t groundbreaking, but you watch the evil organization grow from just a few henchmen to having enough force that they can take over most of a region in an all-out war. It was interesting to see the bad guys grow as you do and become an increasing threat instead of being pre-established. It’s far from the best plot in video game history, but I found it at least more engaging than Pokémon’s usual plotlines that take a back seat.

Can I say Sword and Shield are bad games? Absolutely not. Is Temtem perfect? Also, absolutely not. But as a long-time fan of the Pokémon series since Red and Blue, Temtem has been a breath of fresh air, and not just because it’s a different game. Temtem offers a few more things that Pokémon has not in recent years, to the point where Game Freak should maybe have a look at what Crema is doing. I highly recommend trying it out if you feel the same way.

Temtem is available now on PC and PS5 via early access.

READ NEXT: I Love Pokémon Sword And Shield Because Of Its Changes