Becalm might defy the tag of "game" for some, but it's an experience all the same. 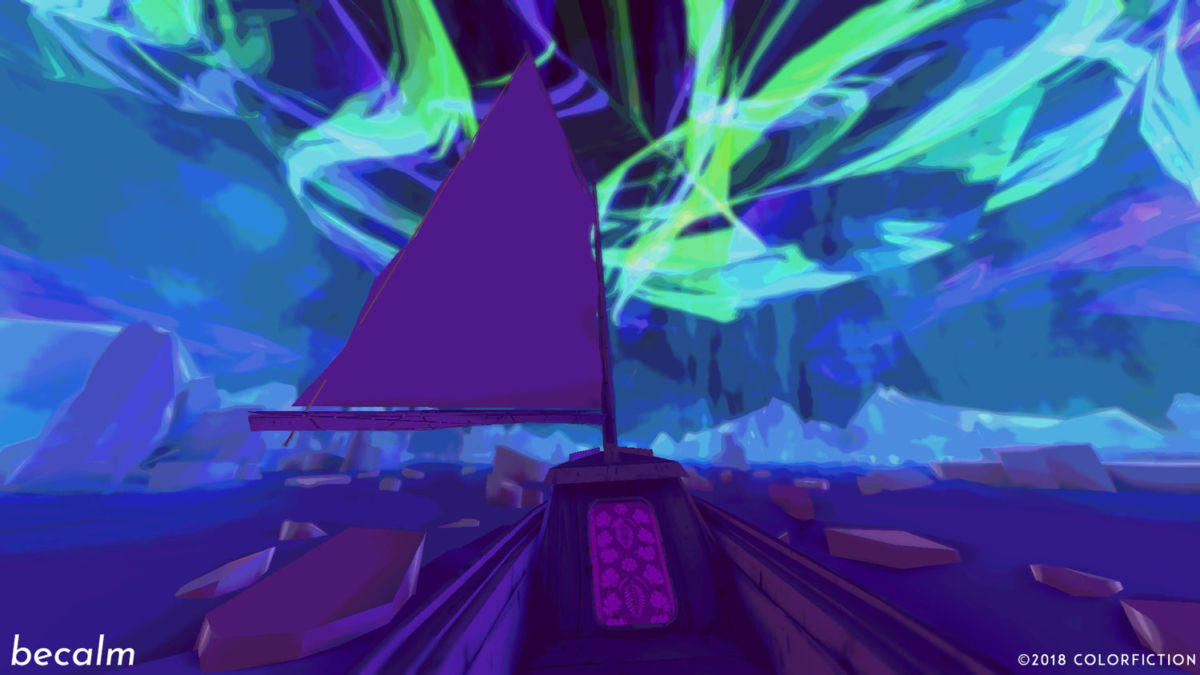 When I wrote my impressions of Colorfiction’s 0°N 0°W, I called it an acid fever-dream world. It was a procedurally-generated exploration game, one that I found best played in the dark with headphones; an experience easily drifted into. Colorfiction’s newest release, Becalm, takes an even more passive and relaxed approach. Each time you launch the game, you’ll be greeted with a new, procedurally generated five-minute boat ride with no destination.

There are no settings to fiddle with or menu to get in the way: launch the program and you’re dropped in. My first ride was through a calming green-tinted landscape surrounded by columns of soft light. My next was through an icy open plane. Each ride randomly selects from a handful of different biomes, each with their own synthesizer-based soundscapes compiled from field-recorded live audio. You’re free to look around and soak in the experience of the journey. There’s a built-in screenshot function, but nothing more. There are no objectives here, no mission timer, no steering of the ship. Becalm isn’t a deep or complicated experience; its doors are open to you immediately, letting you transcribe your own thoughts and feelings onto its world.

Becalm isn’t a game in the traditional sense, its DNA more closely tied to the smaller experimental indie releases of the last few years which have focused on experience over complex gameplay. I’m reminded of David OReilly’s Mountain and Everything, both equally experimental and zen-like in nature. There’s still raging debate about what, exactly, constitutes a ‘game’, and Becalm isn’t for people against the inclusion of introspective experiments – such as Dear Esther and Gone Home – into the medium. Because Becalm doesn’t offer anything more than its own moment-to-moment experience, it doesn’t invite competition or even much interaction. Some people will like that, others won’t. I could see myself leaving my boat sailing endlessly into the psychedelic void if a ‘long journey’ option were added, much as I’ll often leave Everything ‘playing’ itself while I read or do other work on my computer. Becalm doesn’t demand anything of you beyond what you’re willing to give it.

I found that Becalm is best used as a meditative tool. Its short 5-minute journeys are long enough to offer the mind a break: from work, social media, the nagging responsibilities of adult life. And the randomly generated audio and visual experiences of each ride offered an opportunity to flex the ‘focused attention’ muscle and away from my buzzing phone and the neverending stream of music and headlines. Because it’s important to remind ourselves that life is about more than the next objective, the next goal. Sometimes it’s about simply being present – alive, here and now. Becalm’s boat rides offer that presence of mind to anyone who seeks it – everyone would benefit from five minutes of gentle drifting. Sometimes you don’t need a destination.

While 0°N 0°W and Becalm are both experiences I’ve enjoyed, I’m most excited for their next project, Ode to a Moon. A larger, narratively driven experience is an exciting prospect from this developer. It’s always fascinating to see new developers establish their footing in the industry – it’s even more tantalising to know that this is just the star. Anyone who enjoys the frontier of experimental interactive media would do well to keep an eye on Colorfiction this year. Here’s to the next voyage.